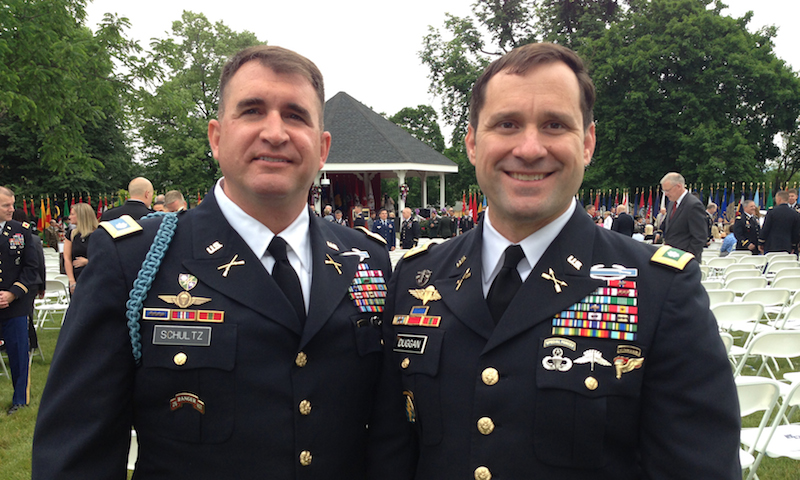 NPS Department of Defense Analysis students, U.S. Army Lt. Cols. Rob Schultz, left, and Pat Duggan, right, have been awarded first place in the 2015 Chairman of the Joint Chiefs of Staff (CJCS) National Defense and Military Strategy Essay Competition. Schultz and Duggan will be honored by the chairman later this fall, with their award-winning essays to be published in a future edition of “Joint Forces Quarterly.”

Former NPS students and U.S. Army War College Fellows Army Lt. Cols. Robert Schultz and Patrick Duggan earned first-place honors while competing in the 2015 Chairman of the Joint Chiefs of Staff National Defense and Military Strategy Essay Competition. But while the accolades were appreciated, the ideas espoused by Schultz and Duggan may linger long after the applause has faded.

“For extremists groups that promote hatred and violence, cyberspace provides a virtual safe haven from which to operate, using websites to promote their causes, raise funds, communicate and grow,” said Schultz.

“With the advent of cyberspace and technology we can leverage cyber-enabled special operations or irregular warfare … It's a national capability that we should have at our disposal. We have a responsibility to inform and educate our senior leaders on the art of the possible in this critical area,” added Duggan.

Duggan’s paper, "Strategic Development of Special Warfare in Cyberspace,” and Schultz’s paper, "Countering Extremist Groups in Cyberspace,” both seek to help the special operations community along the path toward increased U.S. capabilities within the cyber realm. Their recommendations come in the face of increasingly sophisticated cyber attacks from both state actors and irregular forces like the so-called Islamic State.

“The cyber realm is the future and stands at the nexus of irregular warfare … special warfare and cyber are hard enough to understand by themselves, and when you combine them both together, it can be very difficult to get your mind around them,” said Duggan.

“Many of our leaders really do not understand the basic concepts and what they entail; we need to figure this out so we are not doing it in an ad hoc manner like when we invaded Iraq and Afghanistan,” he continued.

Conversely, Duggan notes that several key U.S. adversaries have fully embraced cyber operations and are using them to great effect in conflict zones around the world.

“The time has come for the U.S., like its adversaries, to make a strategic choice to develop cyber-enabled special warfare as an instrument to protect and project its own national interests,” he said.

Duggan’s paper explores the history of special warfare within the cyber domain focusing on the efforts of Russia, Iran and Syria. His findings are sobering.

Schultz points to the anonymity of the cyber realm and the ability of extremist organizations to gain footholds within the cyber domain.

Both Schultz and Duggan advocate countering the use of cyberspace by extremist groups through strategies that include deception “pseudo operations” and false fag operations (FFO).

“Over time, the narratives shift subtly, to influence the target audience into believing the group’s ideology is corrupt, or so devious that the target audience would feel that their bond of trust has been broken, thus compelling supporters to terminate association with the extremist group in cyber space,” he explained.

Schultz and Duggan credit NPS with providing them with the tools and academic footing from which to pursue these critical areas.

“NPS has some leading thinkers in these areas that have been beating the drum for over 20 years,” said Duggan.

One of those thinkers, NPS Department of Defense Analysis (DA) Professor and Chair Dr. John Arquilla, has been writing about this topic for over a decade. He weighed in on Duggan and Schultz’s work and the importance of similar work in the DA department.

“Both of their papers were on important cyber topics – a key area of emphasis in Defense Analysis, especially in our information strategy curriculum,” said Arquilla. “DA has been a leader in teaching and research in cyber strategy and policy, operations and ethics for many years.

“DA's areas of emphasis in cyber nicely complement other NPS cyber competencies in computation and analytics, as well as in science and engineering. Taken together, all this expertise gives NPS real a comparative advantage,” Arquilla added.

During a recent visit to NPS, Vice Chief of Naval Operations Adm. Michelle Howard called for innovation in light of rapid advances in the cyber realm ... just the sort of thinking fostered by Arquilla and espoused by Duggan and Schultz.

“It is not always just the technology that changes … When you have the birth of a new domain, it forces you to change the way you think as warfighters,” Howard explained. “I believe [the cyber domain] is the fourth dimension of warfighting.”

And the ability to operate in this domain, she said, presents a number of complexities to leadership given the adversaries’ ability to exert impact at the speed of light, around the world. A challenge, the VCNO added, that NPS students must work to overcome.

Duggan did not need a lot of convincing.

“This is a topic that I am passionate about,” he said. “[Our awards] really speak to the quality of education that is ongoing here at NPS.”

“We were successful, in part, because of the resources that NPS provided us. From faculty to materials, all have been very helpful to our ability to earn these awards,” added Schultz.

The competition amongst essayists was fierce, some 60 entries made the final evaluation round in the short essay category, and over 40 in the longer paper category. Schultz and Duggan will be presented the awards by the Chairman of the Joints Chiefs of Staff later this year.