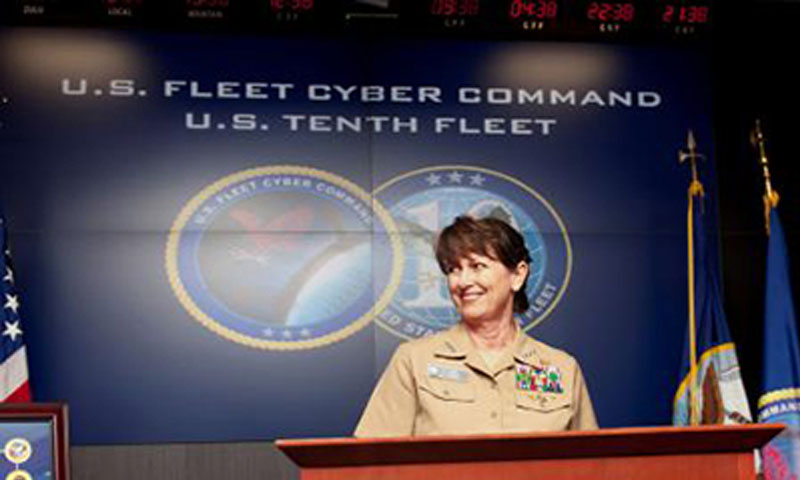 With this appointment, Tighe becomes the third commander of FCC/C10F and the first female commander of a numbered fleet in U.S. Navy history.

"It is an honor to take command of this outstanding warfighting organization and to be able to continue working with the tremendous team of uniformed and civilian professionals," said Tighe.

Tighe has served as deputy commander of FCC/C10F since November 2013.

"It has been a tremendous honor and privilege to serve as your commander for the last two and a half years. Your support of the nation's maritime strategy by effectively employing our mission capabilities globally has been outstanding," Rogers said. "I now pass the conn of [FCC/C10F] to Vice Adm. Jan Tighe. She is an exceptional leader, innovative thinker and stalwart warfighter who will continue our momentum of mission accomplishment and transformation."

Tighe was promoted at the National Cryptologic Museum by Gen. Keith B. Alexander who retired March 28 from his position as commander of U.S. Cyber Command and director, National Security Agency/chief, Central Security Service.

"I think the greatest honor and privilege I've had is to work with great people," Alexander said, "and Jan Tighe, you are one of the best people that our military has across all of the services."

"You are exceptional in every category and you will do great with Tenth Fleet, which I believe is just a stepping stone for future things for you," Alexander went on to say.

Tighe was born in Bowling Green, Ky., and raised in Plantation, Fla.

Tighe is a graduate of the U.S. Naval Academy and was commissioned as an ensign (special duty cryptology) in 1984. She attended the Defense Language Institute in Monterey, Calif., where she studied Russian. She also attended the Naval Postgraduate School, Monterey, Calif., and in 2001 was awarded a Ph.D. in Electrical Engineering and a M.S. in Applied Mathematics.

Tighe wears both the Information Dominance Warfare insignia and Naval Aviation Observer wings, which she earned while deployed as an airborne special evaluator aboard VQ-1 EP-3E aircraft in the Persian Gulf during Operation Desert Shield/Storm. She is also a member of the Acquisition Professionals Community and holds a Level III Defense Acquisition Workforce Improvement Act (DAWIA) certification in Program Management.

U.S. 10th Fleet is the operational arm of Fleet Cyber Command and executes its mission through a task force structure similar to other warfare commanders.