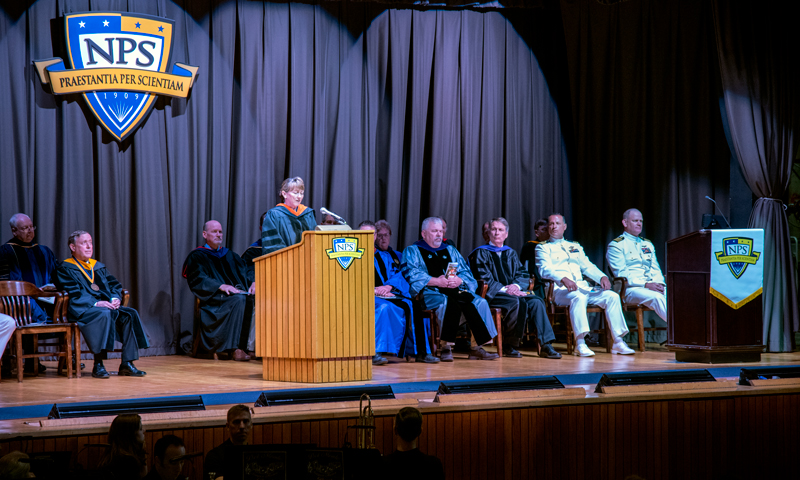 “We have immersed you all in an extremely competitive academic environment that has enabled you to focus on the challenges that affect your service, our defense capabilities, and national security,” Route said. “From today forward, our nation will count on you as strategic influencers, problem solvers and leaders. It is our hope and expectation that you leave here prepared to serve, and prepared to do something great.”

He then turned the podium over to commencement speaker, Deputy Chief of Naval Operations for Information Warfare, Director of Naval Intelligence and former NPS President Vice Adm. Jan E. Tighe.

“I really am delighted to join you here today. It is always special to return to NPS, it feels like coming home and that is because of the NPS family that I have here,” said Tighe.

“Graduations are extra special. In fact, my husband keeps referring to my upcoming retirement ceremony as my own graduation, [and] it only took me 34 years to complete my course of study with the Navy,” she noted with a laugh from the audience. “But at the heart of that study was my time here, not only shaping what I l know, but how I think and approach solving problems.”

Tighe graduated from NPS in June of 2001, earning a Doctorate of Philosophy in Electrical Engineering as well as a Master of Science in Applied Mathematics. She went on to refer to that period as a time when “the cold war was a distant memory and the threat of terrorism was not yet understood,” she said. “That, of course, would change drastically in just four short months, and for the next 17 years, our military would be focused on countering terrorism and extremist organizations.

“With those troubles still lurking, we now face a period of great power competition,” Tighe continued. “With both a resurgent Russia and a rapidly rising China as near peers, our military must prepare for a period of renewed strategic competition. And in this new era, no longer are we as a military singularly supporting the fight ashore in a permissive maritime environment. Our focus has now returned to the strategic crossroads that dominated our focus on decade’s past.”

While addressing this strategic competition, Tighe turned her attention to the rapidly changing world we live in and its ever-evolving problems. In referencing a threat assessment by Director of National Intelligence Dan Coates, released earlier this year, Tighe noted that cyber is now leading the list of global threats, ahead of the threats of weapons of mass destruction, ahead of terrorism and new threat areas that have been added to the list, such as counterintelligence, foreign denial and deception, disruptive technologies, space and counter space.

“To face this new and much more complex world, we must recognize this changing character of war, and look for rapid technological changes that can give us an edge in the information age,” said Tighe. “Data science, artificial intelligence, human-machine teaming, machine learning, modeling and simulation, and gaming, make up the new face of modern warfare and can ensure our advantage in any fight.

“With the operational environment we face, now more than ever, the Navy and all branches of the military, our government and our allied nations need a cadre of professionals educated at the highest level,” Tighe continued. “That’s why you are here, completing your degrees at this prestigious institution. The Naval Postgraduate School has always been the key center of education that provides the military with leaders, technologists and critical thinkers that give us the edge.”

Tighe went on to invoke the NPS mission statement, emphasizing the university’s role in increasing the combat effectiveness of commissioned officers of the Naval Service.

“Now more than ever, we need you to walk out these doors with the solid intent to use what you learned in Monterey,” said Tighe. “We need you to apply your thoughts, insights, research and critical thinking skills to our hardest problems and our greatest challenges. We need you to keep exploring new areas and defining new concepts to apply to the warfight of tomorrow.

“Your NPS education is an investment we made in you, and I challenge you to pay it back every day in your role as a leader in the service,” Tighe said in concluding her remarks. “I want to congratulate each of you for what you have accomplished. Be proud of your achievement because we are proud of you.”

Following her remarks, Tighe was presented with a medal formally inducting her into the NPS Hall of Fame. Recognized as a “driving force in the development and use of information as a warfighting capability at the tactical, operational and strategic levels throughout her career.”

Tighe has been a pioneer for women in the service. She was the first woman selected to serve as a numbered fleet commander when she was named Commander, U.S. Tenth Fleet/Fleet Cyber Command. Additionally, she skillfully led NPS as its president, providing “steadfast leadership and guidance during a challenging period of the school’s history ... Her exemplary and remarkable leadership in service of this country distinguishes her as an ambassador of the excellence of the Naval Postgraduate School,” Route said.

The NPS Hall of Fame recognizes the accomplishments of university's most distinguished alumni and friends who, through the attainment of positions at the highest levels of public service, have made the greatest contributions to society, their nations, and to the Naval Postgraduate School.