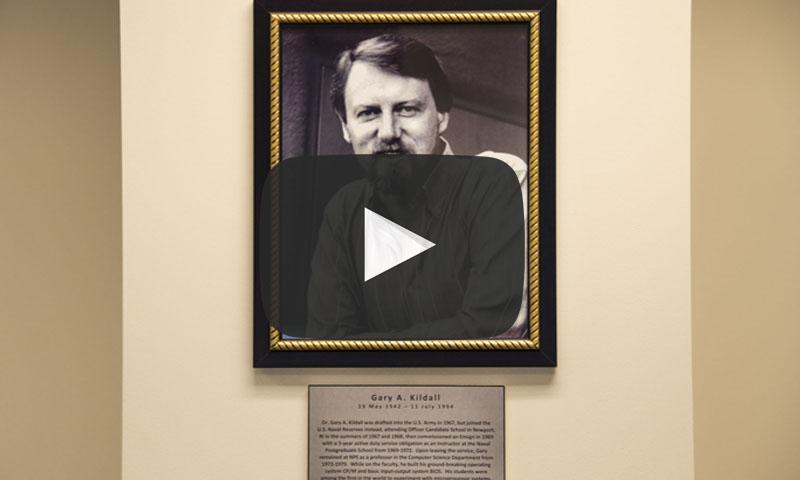 Dr. Gary A. Kildall is not a household name, but he should be.

Kildall’s contributions to personal computing could easily place him on equal billing with modern day tech moguls like Steve Jobs and Bill Gates, for all of these men were instrumental in changing the way computers have been integrated into our daily lives.

In the early 1970s, before Windows, MacOS or even MS-DOS, Kildall created CP/M, the Computer Program for Microcomputers, which enabled Intel’s 8080 processor to communicate with an external disk drive. It would prove to be the world’s first computer disk operating system, and became a critical step forward in making computers personal.

He developed the world’s first high-level microprocessor programming language, PL/M, the foundation on which his CP/M operating system was built.

Kildall also pioneered the first successful Basic Input/Output System, or BIOS, a type of firmware used to perform hardware initialization during the computer’s booting process. BIOS routines work in the background of every computer function as users move freely between programs and hardware devices.

Kildall was a true visionary, a technical savant with equal skill in seeing computing through the eyes of ordinary users. He foresaw users’ desires to multitask, to use windows, and to interact with the machine via a menu-driven graphical user interface, years before these became industry norms.

He is also recognized for leading the development of an optical storage medium, paving the way for what became the standard CD-ROM.

“Gary’s memory is very strong at NPS because he was an innovator and a great collaborator. As a former member of our computer science department, we’re very pleased to have the conference room in his name,” said Dr. Peter Denning, Chair of the NPS Department of Computer Science.

“For somebody here [at NPS] to influence software computing and micro-computing around the world is truly remarkable,” added Dr. Doug Williams, former director of NPS’ W.R. Church Computer Center.

The dedication was not the first time Kildall had been honored on the Monterey Peninsula. In 2014, David Laws, representing the Institute of Electrical and Electronics Engineers (IEEE) Milestones in Electrical Engineering and Computing program, was instrumental in having Kildall’s work recognized with an IEEE Milestone. A bronze plaque honoring Kildall’s contributions was placed in the sidewalk at his former residence and headquarters of his company, Digital Research Inc., located in nearby Pacific Grove.

Recognizing NPS' importance in the work that Kildall had done, IEEE Region 6 Milestone Coordinator Brian Berg initiated the creation of a duplicate bronze plaque which now adorns the conference room named in Kildall’s honor. “It’s one of the few times that a second plaque was created to recognize an accomplishment of this caliber. We now honor Gary's legacy with a plaque at DRI’s former headquarters, as well an identical one here at NPS,” said Berg.

Kildall was relatively well known on campus during his time as an NPS professor through the 1970s. His reputation as an innovative, disruptive-thinker was matched only by his proclivity for challenging his students.

One of Kildall’s thesis students, a young submariner named Gordon Eubanks, recalls his time with the visionary professor well. Eubanks went on to have a highly-notable career in computing, eventually becoming President and CEO of Symantec, a well-known utility and anti-virus software company.

“I was a naval officer in the 70s and was sent to the postgraduate school in 1975,” recalls Eubanks. “I was lucky enough to meet Gary Kildall, and have Kildall as my thesis advisor which of course changed my whole career direction.”

Eubanks freely admits Kildall frustrated him at the time, meticulously scrutinizing his thesis. But he also developed a deep respect for his mentor, eventually working for him at Kildall’s Digital Research Inc.

Kildall passed away far too young at only 52 years old. During the dedication of the conference room, Kildall’s daughter, Kristin, noted how her father always placed a high value on collaboration, on sharing ideas to make a difference in the lives of everyday people.

“From the beginning of his career in technology, he valued sharing ideas, moving technology forward and bettering his community,” she said. “His passion for innovation and ideas was seen throughout his career as a primary force.

“I am really touched by having the conference room named in his honor,” she continued. “It tells me that his legacy is longstanding, and that he really contributed in a powerful way.”