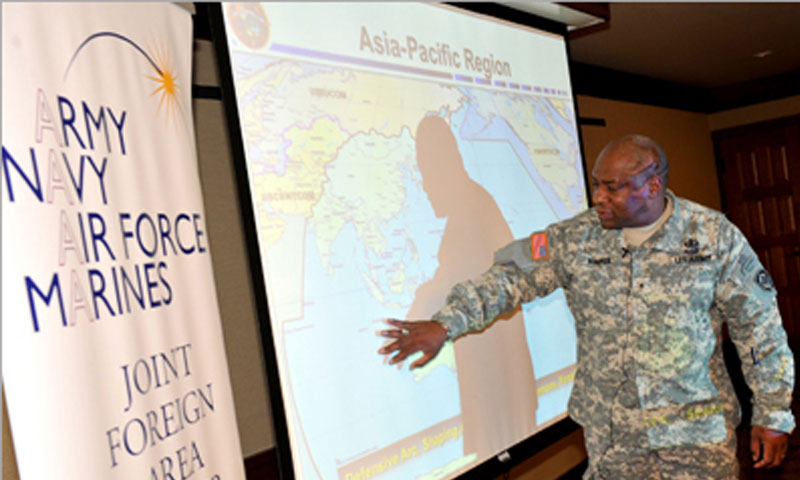 “I’m very proud of being a FAO,” noted Hooper in his opening remarks to the class of 24 senior military officers.  “I’m here to teach, coach and mentor FAOs, and I’m happy to pass on whatever advice and wisdom I can provide you with.”

Hooper began his remarks by outlining current and emerging strategies relevant to PACOM operations and detailing the combatant commander’s priorities and perspectives in the Area of Responsibility (AOR).  While emphasizing the roles and responsibilities of senior FAOs, Hooper noted the unique capabilities that make these cultural and regional experts a vital contributor to the PACOM mission.

“FAOs posses the knowledge, education, experience and are aware of intricate cultural sensitivities to assist commanders in the planning, implementation and execution of regional strategy and operations,” noted Hooper.  “What makes us unique is that we have the advanced degrees and training required for developing overarching strategies and framework, but you also wear the uniform. As senior officers in the FAO community, you’re not expected to interpret others views anymore.  Now you’re being looked at to generate your own.”

Hooper also took the opportunity at JFSSPP to share his experiences working as NPS’ FAO coordinator with course participants.

“Working at NPS allowed me to combine my operational, teaching and experience serving as a FAO in an academic setting,” noted Hooper.  “I was afforded the opportunity to think more academically and strategically about operations while serving there.”

For Air Force Maj. Barry Little, Hooper’s presentation brought relevancy and excitement to the course due to the variety of experience and education the Army general shared with participants.

“I had the opportunity to work with General Hooper earlier in my career when I was a studying as an Olmsted Scholar in China,” noted Little.  “He brings a unique combination of education and experience, as well as being a China expert, and was willing to share and advise us drawing from an entire career’s worth of FAO experience.”

Hooper, a native of Willingboro, New Jersey, is a 1979 graduate of the United States Military Academy, West Point, New York, and has received a Masters in Public Administration Degree, with honors, from Harvard University in 1989.  He is also a graduate of the Infantry Officer Basic Course, Armor Officer Career Course, Defense Language Institute, U.S. Army Command and General Staff College, U.S. Army War College, and the British Ministry of Defense Chinese Language School, Hong Kong.  Before assuming duties at the PACOM Staff Hooper served as the U.S. Defense Attaché to the Peoples’ Republic of China from 2007 to 2009.