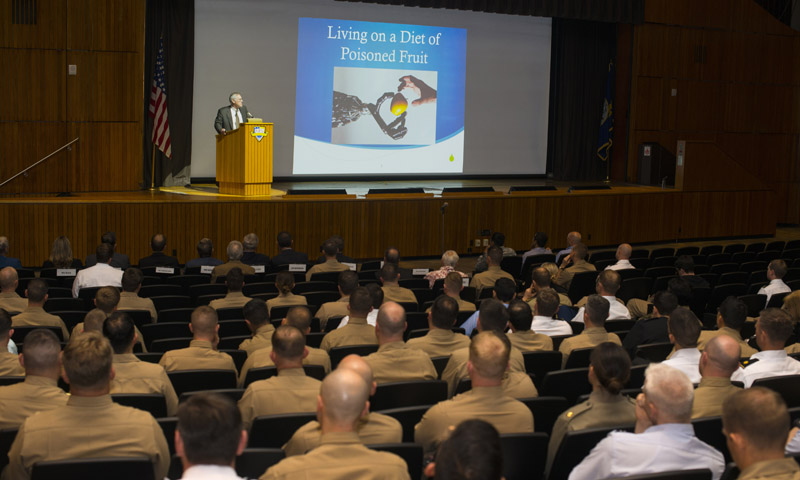 Former Secretary of the Navy the Honorable Richard Danzig speaks to NPS students, faculty and staff during a Secretary of the Navy Guest Lecture at King Auditorium, Feb. 9. Danzig offered insight into the national security implications of digital insecurity in a world where security must be built from essentially insecure components.

“The problem is a complicated one … [Cyber systems] are inherently insecure,” said Danzig. “[But] We have to have them, they are essential to the major enterprises of this world.

“We are living on a [cyber] diet of poison fruit, but you can’t skip the diet,” he continued. “You have to have the nutrition. The question is, how do you live with it? Or to put it differently, how do you build security out of essentially insecure components?”

Danzig also discussed the ramifications of the world’s growing reliance on cyber systems as well as the affect of that reliance upon “our national well-being.” He pointed to the potential for rogue actors to hack into and affect power grids as well as flight and missile control systems, noting, “This is a national security issue.”

“There are insecurities within the system that could allow an adversary to render us unable to act … We may find that we have no ability to get our airplanes where we want them, or our ships to function properly, or our missiles to fly where we need them, because these systems were dependent on digital systems and those systems were subverted,” Danzig explained.

But Danzig neither “admires the problem,” or takes a Luddite position towards cyber systems. Rather, he challenged NPS students, faculty and staff to delve deeper into the problem in order to understand why cyber challenges exist and to find ways to live with them.

To that end, Danzig offered seven recommendations that he believes are broadly relevant to the general American public, the security establishment, the Navy and to the university. Those recommendations ranged from questioning the necessity of some digital network connections, as well as the mass compilation of data and the ease at which it can be shared. He also discussed the problems of complexity and interconnectivity, and even the possibility of using analogue technology where appropriate.

Danzig challenged the assembled students and faculty to consider whether or not, for example, they need a printer that is capable of connecting to the internet, storing information and sending faxes, or do they just need something that prints on paper?

Danzig also noted the contribution of NPS researchers across the cyber domain. In particular, he recognized NPS’ foothold in the social sciences and their potential for further development in the cyber arena.

“We need to understand a lot better what causes humans to do what humans do, both as attackers and as defenders. When we understand that better, we will design better systems … There is a whole area of activity there that is very ripe for this school,” he said.

Danzig was sworn in as Secretary of the Navy on Nov. 16, 1998. He served as Under Secretary of the Navy between Nov. 1993 and May 1997. He is, among other things, the Vice Chair of the Board of Trustees of The RAND Corporation, a member of the Defense Policy Board and The President’s Intelligence Advisory Board, and a Director of the Center for a New American Security.