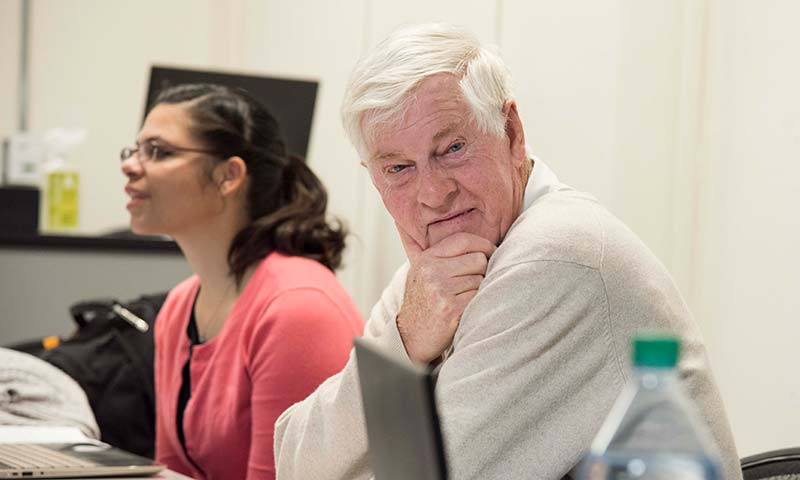 The Naval War College (NWC) Monterey program honored longtime NPS Professor Jan Breemer with the Navy Superior Civilian Service Award and Medal prior to his retirement, recognizing his 30 years of dedicated federal service. Breemer officially retired from his position in the NWC Monterey program this past April.

Breemer taught national security decision making for 18 years as part of the NWC partnership with NPS for Joint Professional Military Education. Prior to that, he taught in the NPS Department of National Security Affairs for a dozen years.

“It is difficult to imagine a more rewarding job than the one I had with the Naval War College,” Breemer said. “But when you suddenly realize that your students are closer in age to your grandsons than they are to you, time comes to make room for the next, ‘post Cold Warrior’ generation.”

Breemer’s dry sense of humor and sometimes jolting views on authority came across in the classroom, but he was highly-regarded for guiding his students into healthy debate during class.

“Students are often taken aback when I start off a new quarter, and inform them of my mantra for the course on questioning authority," said Breemer. “They are more at ease when I explain I am not talking about their chain-of-command per se, but instead the next 10 weeks of give-and-take questioning and counter-questioning, not just with me, but most importantly, between and among themselves. This is the kind of Socratic dialogue which I believe should be at the heart of a graduate education.”

An impressive 2,000-plus students passed through his course in Theater Security Decision Making, where students gain the ability to size up a complex problem, and to ask the right questions. Breemer recalls a phone call from a former student now working in the Pentagon as a proud and satisfying moment that his teaching was well-received.

“He told me he had just sat in on a session of the Joint Requirements Oversight Council, chaired by the Vice Chairman of the Joint Chiefs of Staff. He told me, ‘Sir, it was just the way you had told us in class. I understood everything,’” Breemer recounted.

Breemer says he will undoubtedly miss the intellectual stimulation from both his students and his colleagues. True to his wry sense of humor, however, he does point out that he will no longer need to worry about the possibility of another government furlough again.

Breemer and his wife, Ann, have long postponed trips abroad, but says he now plans on changing that. He is also looking forward to finishing his manuscript on the Battle of Britain with enlightening arguments of how early radar had less to do with the outcome of the battle than most historians have claimed.

Originally from Haarlem, The Netherlands, Breemer immigrated to the United States as a young man and worked on the waterfront in Long Beach, Calif. for several years before going back to school. He attended the University of Southern California, where he earned a Ph.D. in International Relations. He then moved his young family to Washington, D.C., where he worked for more than a decade in a variety of policy think tanks in the area, with a research specialty in Soviet naval strategy and capabilities.