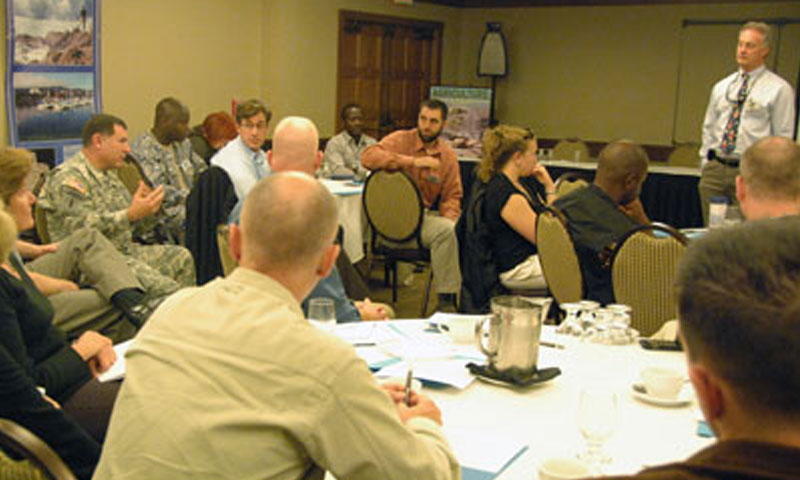 Agriculture and the empowerment that comes with self-reliance allow conflict-affected environments around the world to rebuild economic foundations and establish lasting resources.

From March 22-25, the Center for Stabilization and Reconstruction Studies (CSRS) at the Naval Postgraduate School hosted a workshop titled “Agriculture: Promoting Livelihoods in Conflict-Affected Environments” to discuss key components of conflict-affected agricultural reconstruction in countries like Ethiopia, Iraq, Kenya and Afghanistan.

Panelists represented the Food and Agriculture Organization of the United Nations, United Nations Development Programme, the National Guard, the U.S. Army Reserve Medical Command, USAID, MARKETS, and the now merged International Cooperative Development Association and the Volunteer Development Corps (ACDI/VOCA). Group discussions fostered a safe environment for new and different ideas of how common practices could be changed to make way for growth in areas around the world recovering from conflict.

For many communities, assistance is needed in areas where the crops are not meeting their full potential because farmers do not have a clear understanding of efficient agricultural practices. David Odigie from Nigeria represented MARKETS, a USAID-funded project and a key resource for the struggling agricultural community of Nigeria. In the wake of religious, political and economic disputes, MARKETS connects farmers to the resources they need to thrive in the top commodities in the region: cassava, cowpea, fisheries, maize, rice, sesame and sorghum.  “We want to make farmers see agriculture as a business,” says Odigie, “Some of them do it as a hobby, some of them do it because they don’t have a choice.”

Odigie explained how MARKETS provides pest-resistant, high-yield seed, quality fertilizer and a network of support for farmers to create a sense of community with other local growers. This self-reliance allows farmers to contribute to the economy while also improving living conditions for their families.

“Before our intervention, the average yield was less than 1.8 tons per hectare of rice production. But with the right agronomic practice, with access to the right seed, fertilizer and some level of credit,” says Odigie, “the average at the end of the year, their productivity increased to yield over four tons/hectare. Most of them are now going to send their children to school. Most of them are able to build better houses.”

The CSRS panelists also discussed the toll that livestock illness and disease can take on agricultural reconstruction efforts. For farmers whose livelihoods depend on their livestock, the loss of poultry and cattle can mean financial ruin. Because many new viruses are transboundary, they are easy to spread through importing and exporting, not only endangering livestock, but also humans. In response to the avian influenza outbreak in Asia, the Food and Agricultural Organization of the United Nations (FAO) took measures to remove diseased birds from farms.

“The disease control measure that was utilized to control avian influenza was extensive bird culling. We went there to Southeast Asia and we mitigated the problem,” says Dr. Sigfrido Burgos of FAO. “But for the people, this meant food. For families that are living below the poverty line [a dollar a day or less per person] – if you kill a bird, it represents two dollars,” he added.

Burgos explained that the efforts to contain avian influenza and other emerging diseases in Southeast Asia were difficult because safety precautions were often overlooked by small farmers unable to shoulder the financial burden. Knowing that, FAO took a survey and found that most Asian consumers were interested in purchasing local poultry, and would be willing to pay slightly more at the market to buy certified birds.

Shifting the cost to the demand side would enable small farmers to take the necessary safety precautions to prevent the spread of transboundary diseases without losing money. “We wanted to develop something that was demand-side driven,” said Burgos. “We wanted to leverage the market in order to derive some measures that could be agreeable.”

Through the CSRS Agriculture workshop, members of various government, military and humanitarian organizations were able to bring together ideas for how to best help regions recovering from conflict to build up their economy through agriculture. Conversations centered around relief efforts and sensitivity to cultural practices, as well as the financial burdens on smaller farmers who are faced with a loss of livelihood from conflict.

For some communities, conflict can ravage what was once a successful agricultural region and turn it into a barren battlefield. In the case of ACDI/VOCA, Cathy Phiri shared the struggles of the communities along the region known as the “grain basket” of Kenya. In 2008, post-election violence erupted in the region that was once fertile and rich in maize production and livestock. When the population fled to Uganda, many left behind valuable livestock and crops. ACDI/VOCA had been in the region when the violence erupted, working with farmers to improve maize production. Aid workers were also forced to flee for their lives.

“In the post-election violence, the impact was 180,000 people in the Rift Valley fled their homes, 1,200 people died … And this was only a two-month period,” said Phiri. “There was a loss of 225,000 metric tons of maize yield. And some 10,000 hectares of sugar cane were burned.” Following the conflict, the area began the monumental task of rebuilding what was once a successful growing region.

As the workshop progressed, stories and practices emerged that allowed attendees to explore agricultural practices that might not have been immediately obvious before. Calita Woods, a graduate student at the Johns Hopkins School for Advanced International Studies, attended the workshop to help strengthen her understanding of global agricultural practices to better prepare for her future. “I wanted to learn about the intersections between food security after conflict and the implementation of agricultural programs in conflict afflicted areas.” She explained. “It has been really good being here. For me, things like this always help me to make connections and to use information that I already learned, a topic that I researched for school, and bring it home to the real world application.”