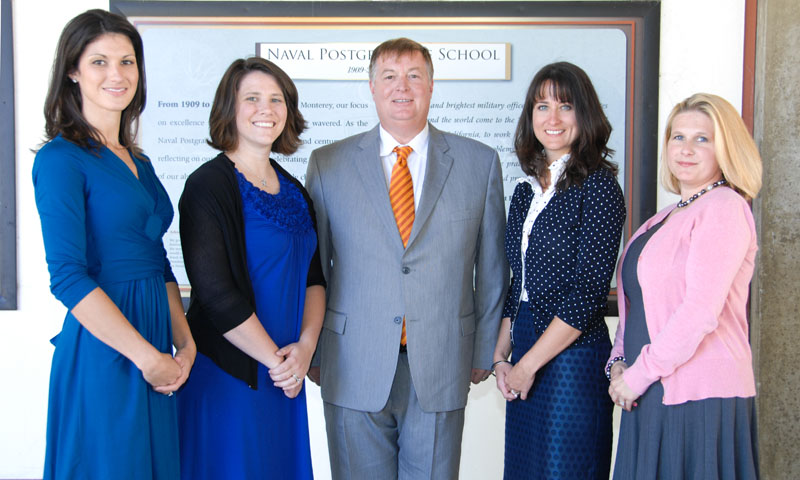 Students from the first graduating cohort of the distance learning human systems integration degree program are pictured prior to commencement ceremonies in late September. The inaugural cohort included civilians from the Departments of the Navy and Marine Corps, a Navy officer, and a contractor working with the Department of Defense.

When the Naval Postgraduate School graduated its first cohort of students in the distance learning Master of Human Systems Integration (HSI) degree program this past quarter, it was not the first time an HSI graduate had crossed the stage in King Auditorium. Resident degree programs, and graduate certificates, in HSI have been on campus for a number of years, and underscore the critical importance of the human in man-machine interaction.

"You've heard of the expression 'The human in the loop?'" posed Dr. Nita Miller Shattuck, an expert in optimal performance and system design. "The Department of Defense and other federal agencies are increasingly recognizing that the human is the loop … That people are critical components in any complex system, and that their capabilities and limitations need to be researched, documented and integrated if the system as a whole is to achieve optimal performance."

The HSI program is focused on humans as a significant priority in systems design and acquisition. Given the understanding that people are critical to system development, the degree provides students with the knowledge to optimize total system performance.

“The DL Master of Human Systems Integration program began in the fall of 2011,” said Shattuck. “It was created at the request of our resident master’s in HSI curriculum sponsor.”

This first cohort was comprised of students from multiple military branches … a Navy officer, four Department of the Navy civilians and two Marine Corps civilians. In addition, Deborah Swain, this cohort’s distinguished graduate, is a contractor with DOD.

“We merge all the domains of human engineering to ensure that we’re designing for the human from every facet of the design, rather than trying to implement the human to hardware’s design,” she said. “In acquisition programs it ensures that you include the person up front.”

The program consists of several courses in systems engineering, acquisition, survivability and much more taken over the span of two years, and is limited to 30 students per year.

“The program helped us understand the government side of HSI,” Swain emphasized. “When you’re receiving information from a program, you understand where it’s coming from and how much power you have to actually respond to the government when it comes to making changes to a contract. Communication opens up from the contracting side up through DOD and the military.”

Mike Ferguson, a Department of the Navy civilian working out of the Washington Navy Yard, also graduated with this initial cohort.

“In my particular field of submarines, it’s a system of systems … So, we’re looking at dual systems themselves and how they interface with other systems,” said Ferguson. “We’re also looking at redundancy, so in some sense, you would think that human systems integration is simply a section of system engineering.”

The cohort, though not physically in the same classroom like typical students, still interacted as though there wasn’t any distance between them.

“It was a lot like having a gym buddy,” said Swain. “We motivated each other to get the work done and we helped support each other along the way. It was nice to get to meet with everyone in person at graduation because you already feel like you know each other so well.”

Ferguson appreciated the distance learning option that the HSI program offered, especially with his core responsibilities as a DON civilian.

“If you travel, it allows you to get work done as long as the connectivity worked,” he said. “I’ve worked on coursework out of Japan, a few times out of Hawaii, and that made things a lot easier when it came to my job,” he said.

“It gave me an opportunity I wouldn’t have had otherwise,” added Kathy Ferguson, a DON civilian also at the Washington Navy Yard. “There was no way I would have been able to come out here and get a degree. I’m very thankful for the distance learning opportunity.”