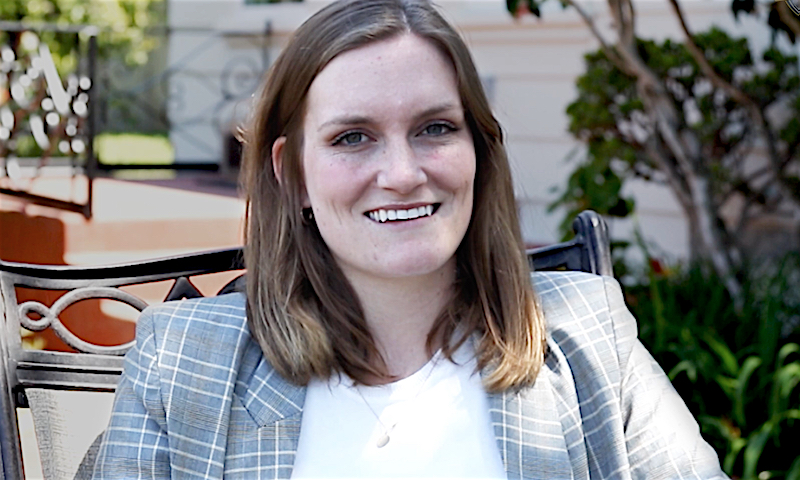 Inside the Graduate School of Business and Public Policy (GSBPP) at the Naval Postgraduate School (NPS), Noni Jones is an administrative whiz. By day, the modest intern with a kind disposition deftly navigates the Defense Travel System, the military’s behemothic travel organization, to greatly ease the burden on university faculty.

Yet with Jones, there is more than meets the eye. Outside of NPS, she is a graduate student at the nearby Middlebury Institute of International Studies (MIIS), where she prepares for a future of deftly defeating a new generation of cyber criminals and money-laundering masterminds.

“My specialization is the nexus between financial crimes and cybersecurity,” she said. “I’m really interested in the economics of illicit trade and how that affects everything from national security to quality of life and loss of industry. When it comes to data protection and economic espionage, it’s just like the Wild West out there and is so incredibly intriguing.”

Jones’ passions were revealed to the world in March when she and three other MIIS students banded together to react to a devastating cyber attack on the United States on the scale of 9/11 or a ‘Cyber Pearl Harbor,’ a notional scenario presented at the Atlantic Council’s intense Cyber 9/12 Strategy Challenge competition in Washington, D.C.

The MIIS team placed second - only behind the Air Force Academy – out of 47 teams from such esteemed universities as Brown, Columbia, Duke, Georgetown, Stanford, Tufts and the other service academies.

“That competition was fierce!” Jones recounted. “First, we had to write a policy memo and present it, then go on to the next round, 10 hours overnight. We literally didn’t sleep at all.”

“The scenario kept changing as one moment you learn the Russians are involved, then its Hezbollah operating out of Venezuela; how do you react to that?” she continued. “A lot of it was focused on the interconnectivity of government agencies and how you would use a particular agency to employ X, Y or Z.”

Yet the MIIS team persisted through the epic encounter and emerged as one of the best. Jones chalks up their success to the expertise of her all-women team, which they dubbed “MIISattribution 2.0.”

“To be able to bring our vastly different skills together cohesively and not want to kill each other at four o’clock in the morning was really great,” she said. “Things didn’t always go perfectly, but it was just water off the duck’s back: we just kept moving, kept tracking, and I think that reflected really well on us.”

When asked how she acquired her particular powers, Jones did not blink.

“The Naval Postgraduate School!” she declared. “I feel like it’s this crown jewel of Monterey, like I’m part of something that’s actually producing something really cool.”

Jones has interned at NPS for the last two years, but her NPS roots date all the way back to her childhood. Her father, an Army pilot, attended NPS as an aerospace engineering graduate student in the 90s and would often bring her to school.

“It was an insanely beautiful campus,” she mused, recalling the first time she stepped foot onto NPS. “Looking out over the garden when the setting sun hits it, just had this … glint to it; it took my breath away.”

Since then, Jones traveled far and wide as a self-professed “military kid,” moving through the Marshall Islands, Washington, D.C., San Diego, and then San Francisco State University, where she studied international relations.

After completing her undergraduate degree, she then simultaneously enrolled in MIIS and the federal government's Pathways internship program to begin work at NPS’ GSBPP.

“I’m essentially a travel clerk, but I’m getting the opportunity to learn how the government works and how to operate within it, hopefully to work in public service in the future,” Jones noted. “I’m so glad I’m here; I feel like I’m part of this greater community.”

The creative, innovative and pragmatic ties that bind the NPS community together have awakened in Jones a sense of purpose and an awareness of her own capabilities, she said.

For example, knowing her affinity for cryptocurrency, NPS professors regularly pop by her office with a book to loan her or to engage in insightful conversations about blockchains. The meaningful impact this has had on Jones cannot be overstated.

And Jones is just getting started. She has an internship lined up this summer as an anti-money laundering specialist with a major investment banking firm ahead of her Spring 2020 graduation from MIIS. And she will do so armed with the knowledge, skills and abilities earned through her hard work and engagement with the NPS community.

“I’ve just made so many connections with people at NPS who I feel are really excited to help me get off the ground,” she said.