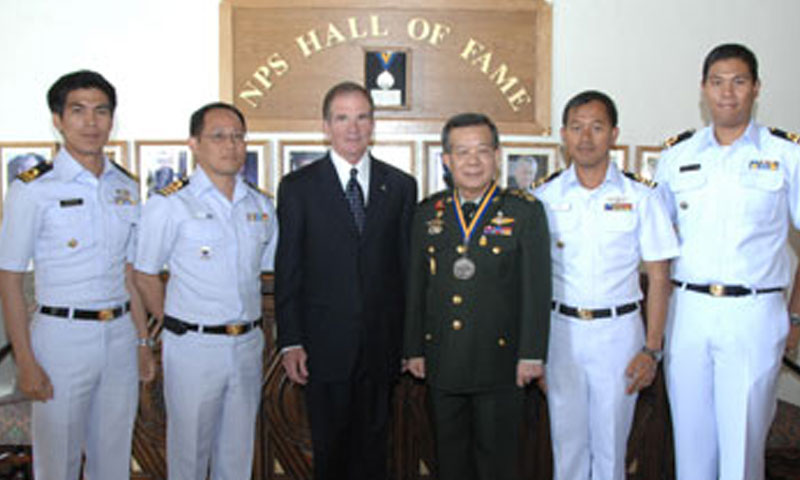 The Naval Postgraduate School welcomed General Apichart Penkitti, Permanent Secretary of Defence of the Thai Ministry of Defence, into the university’s Hall of Fame, placing him in a distinguished group with 11 other NPS alumni whose photos line the wall in Herrmann Hall. The inductees, which include Chairman of the Joint Chiefs of Staff Adm. Mike Mullen, and former Marine Corps Commandant retired Gen. Michael Hagee, have all made significant contributions to the NPS community, the U.S. military, and the global defense structure.

“General Penkitti’s 38-year military career with the Royal Thai Armed Forces includes myriad noteworthy accomplishments,” said NPS President Dan Oliver. “However, there is a common thread in all of them … an unyielding dedication to the welfare and quality of life of the People of Thailand.

“General Penkitti is an ideal leader, and I believe his nation is very fortunate that he serves in his current position of Permanent Secretary of Defense,” he continued.

Penkitti was selected for the honor based on his years of service as a military officer in Thailand, and his work as an advocate for military partnerships with the U.S. He received his degree in Mechanical Engineering in 1976 from NPS.

“I am profoundly honored and grateful for this privilege that has been bestowed upon me,” said Penkitti. “It is a great pride for the Ministry of Defence of the Kingdom of Thailand as well as myself and my family.”

Penkitti expressed his gratitude for the faculty and classmates who supported him through his education. One of those people was his thesis advisor Matt Kelleher, whom he warmly embraced after receiving his award. Kelleher said that he noticed potential in Penkitti back in 1976 when he was still a student working on his thesis project on heat transfer in natural convection.

“He definitely had the potential back then,” noted Kelleher. “But you never know to what level a student is going to rise. But I suspected he was going to rise to the top.”

The diverse population and solid foundation in research at NPS contribute to a strong global defense community, Penkitti noted.  He encouraged current students, including three officers from Thailand, to value their time and experiences at NPS.

“The United States Naval Postgraduate School for me is a source of great pride, and I hope that there will come a time for you to return to this place and feel the same way that I do.”

For the Thai students, it was rewarding to see such a distinguished Thai leader honored for his military and academic achievements. Lt. j.g. Pongsakorn Sommai, an Engineering student set to graduate in September, explained that there will always be a need for strong leaders in Thailand. Penkitti serves as an example for those aspiring to have influential military careers, and to strengthen ties with the U.S. joint forces. 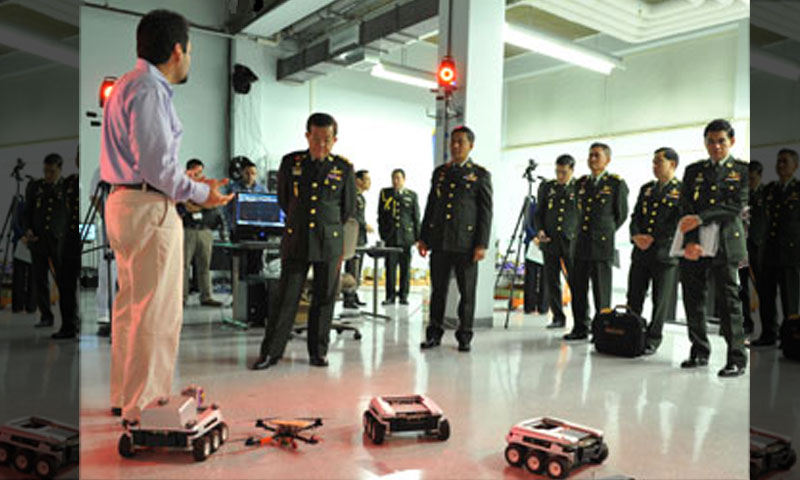 General Apichart Penkitti, Permanent Secretary of Defence of Thailand, tours the Autonomous Systems labs in Halligan Hall following his induction into the NPS Hall of Fame on July 30.

“It’s great to know that one who came before me had such success in his career and was inducted into the NPS Hall of Fame,” said Sommai.

During his visit, Penkitti was accompanied by several delegates from Thailand, including General Chartree Tatti, Director General of the Defense Budget Department, and Lt. Gen. Paichayon Khatancharoen, Deputy Director General of the Office of Policy and Planning within the Ministry of Defence.  Following the induction ceremony, the group took a tour of the campus, visiting the Space Systems and Autonomous Systems labs for demonstrations of research being done on campus. Penkitti noted that through relevant research and comprehensive curriculum, NPS will continue to make invaluable contributions to the global defense enterprise. Through the continued support of distinguished alumni like Penkitti, NPS will no doubt continue to see military leaders emerge and influence change.

“The footprint of our university continues to grow with the success of our alumni, and I firmly believe that we are only just beginning,” said Oliver. “Our graduates are occupying top levels of leadership throughout the world and this is a trend that will only continue … General Apichart Penkitti is an exemplary officer and General, and more than worthy to stand beside all of our hall of fame alumni.”