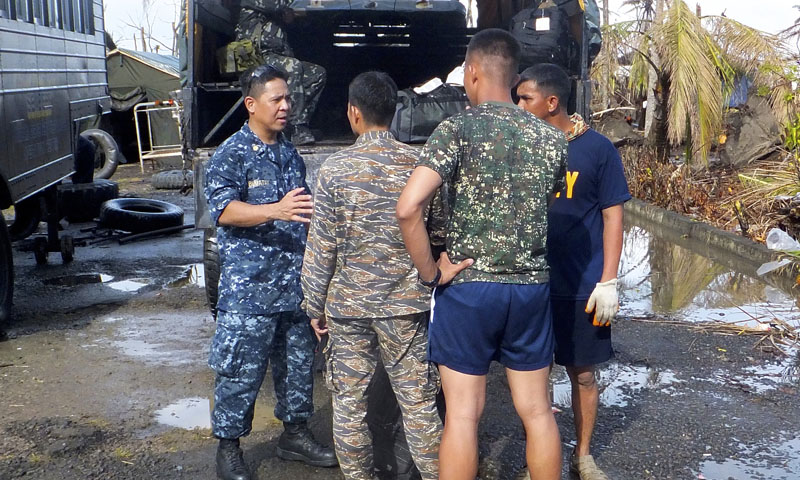 NPS student Lt. Cmdr. Marc Bumatay works with local service members and volunteers during the NPS Hastily Formed Networks deployment to the Philippines in support of Operation Damayan. Bumatay, a native Filipino, volunteered for the operation through a longtime tradition of communal spirit and cooperation among Filipinos known as “Bayanihan.”

The military means a lot of things to different people, but to Lt. Cmdr. Anthony Bumatay, it is the call to “Bayanihan.”

“Filipinos have an ethos called ‘Bayanihan.’ It’s where the whole village comes to the rescue of a resident who may be in dire need of assistance,” said Bumatay.

Soon after, Bumatay volunteered to become a member of the HFN group, affording him the opportunity to answer the call to Bayanihan.

“I joined the Hastily Formed Networks Team during the winter quarter last year,” said Bumatay, who recalled his own experience as a disaster victim himself during the 1991 Philippine eruption of Mt. Pinatubo.

“It was a painful and traumatic experience for many of us in the affected areas. We lost our home and most of our possessions due to the volcano's destructive power,” he said. “I know what it feels like to be internally displaced and to lose everything.”

Bumatay said his drive to volunteer was an easy decision, and that sentiment was put to the test when the HFN group deployed to the Central Philippines in support of disaster recovery efforts in the wake of Typhoon Haiyan, Nov. 18.

Haiyan is on record as the deadliest typhoon in Philippine history. More than 6,000 people lost their lives after the storm made landfall and the region’s entire infrastructure was decimated.

“Transportation on the ground was scarce and very expensive inside of the disaster area. We had to use physical money because the entire economic system was disabled,” said Steckler. “Additionally, we had a variety of cultural and language issues, and that’s where Lt. Cmdr. Bumatay proved invaluable to the success of this operation.”

“When you engage in humanitarian operations overseas, the first obstacles to overcome are cultural and language barriers,” added Bumatay. “I was fortunate to be able to speak the language fluently. I understood the culture, and more importantly, my professional relationships and contacts within the country helped us coordinate efforts.”

A former Communications Officer serving on the aircraft carrier USS Carl Vinson (CVN-70), Bumatay also leveraged his abilities to establish a reliable communications link between the multinational command center (MNCC) in Cebu and personnel operating in the disaster areas.

“If you can't communicate, you can't operate," said Bumatay. “The Philippines lacked [satellite communications] capability and this was a communications gap that our team was able to fix immediately.

After a successful humanitarian mission to his homeland, Bumatay still maintains a great sense of Bayanihan.

“Filipinos believe in the communal spirit inside of us that makes seemingly impossible feats possible through the power of unity and cooperation,” said Bumatay. “I was on the receiving end of ‘Bayanihan’ 23 years ago. Without other people coming to me and my family’s aid, recovery would have been extremely hard.

“Going back to the Philippines as part of NPS' disaster response provided me an opportunity to return the favor,” continued Bumatay. “It was the right thing to do, U.S. military personnel and the international community may not have been aware of it, but what we all accomplished evoked the 'Bayanihan' spirit and I know the people of the Philippines are eternally grateful.”