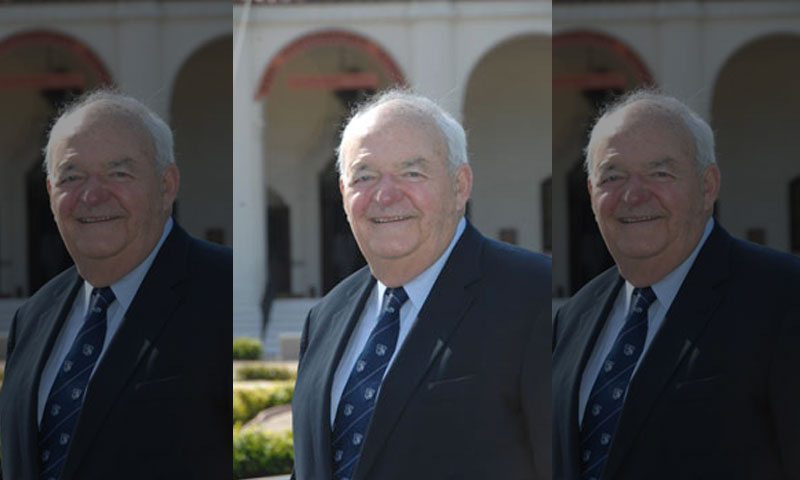 The Honorable Thomas C. Reed presents a lecture to NPS students, staff and faculty on arms proliferation and nuclear security on June 8 in ME Auditorium. Former Secretary of the Air Force and author of multiple books on political history, Reed offered an extensive look at the nuclear capabilities of nations around the world. He warned that nuclear proliferation can and should be stopped.

In a deliberate and captivating lecture to NPS students, staff and faculty, former Secretary of the Air Force The Honorable Thomas C. Reed delved into the history of nuclear proliferation across the globe.

“The reason I wanted to talk to you today is to encourage that nuclear proliferation can be stopped,” said Reed. “It can be stopped by internal political debate; by external persuasion, very forceful carrots and sticks, military force.”

His detailed knowledge of dates, locations and key players in the arena of nuclear capabilities was as impressive as his resume. Reed earned his bachelor’s degree in mechanical engineering from Cornell University, where he graduated top of his class and went on to work for the Air Force Ballistic Missile Division. After earning his graduate degree from the University of Southern California, Reed joined Lawrence Livermore National Laboratory as a designer for thermonuclear devices. Following his time at Livermore, Reed started and ran his own business making superconductors.

His experience in the field of arms proliferation and nuclear security was on his side in 1976 when he was selected as the 11th Secretary of the Air Force, after creating a worldwide military command and control system as the Director of Information Systems for the Pentagon in 1974. Reed worked closely with President Reagan to bring an end to the Cold War.

During his lecture with the NPS community, sponsored by the Dudley Knox Library and the Monterey Bay Chapter of the Armed Forces Communications and Electronics Association (AFCEA), Reed recalled the history of nuclear capabilities and the current politics of nuclear arms around the world. He shared his extensive knowledge on the nuclear proliferation program of every country known to have tapped into the technology, and expressed concern that the consequences of a nuclear attack would be unparalleled. 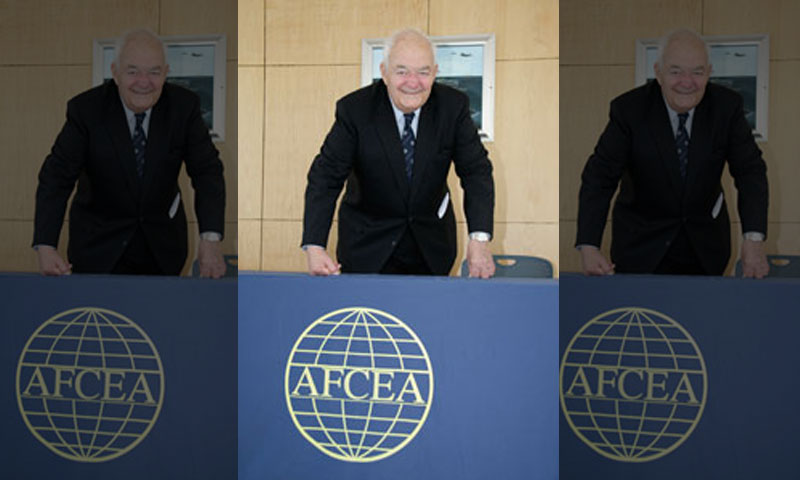 In a lecture sponsored by the Monterey Chapter of AFCEA, The Honorable Thomas C. Reed presented the NPS community with a nuclear proliferation discussion and book signing. Reed was the 11th Secretary of the Air Force and worked closely with President Reagan to end the Cold War.

“We need to think through our response to a nuclear terrorist event. Thinking through our response doesn’t just mean cleaning it up. It means, what are you going to do if a nuke goes off somewhere? Even if it’s in the middle of the desert in the U.S.,” noted Reed. “We really need to think through the consequences of a nuclear attack on the U.S. Fifty years ago John Kennedy feared 15 or 20 nuclear states, there are only 9. That was really the good news that over a dozen have backed off. And backing off can be done, which of course is what is left for your generation.”

As a widely known expert on the topic, Reed has published two books about political history, “The Nuclear Express: A Political History of the Bomb and its Proliferation” and “At the Abyss: An Insider’s History of the Cold War,” which he signed following the presentation.

Reed also received an award of his own at the evening AFCEA meeting where NPS student Air Force Maj. Heath Frye presented Reed with a special AF Cyber Command pin in honor of his service.

“Secretary Reed is a pioneer in the field of science and engineering who went on to lead our Air Force, then help President Reagan win the cold war,” said Frye. “Recently, the Air Force changed its focus, recoding Communications and Information officers from support to operations. Part of this recoding eliminated our support badge and created the Cyber Operation Wings, similar to what a pilot or navigator would wear. I gave these wings to Secretary Reed to denote his contribution through several decades which gave our leaders in Washington insight into how cyber operations can be similar to kinetic operations, both producing physical results.”