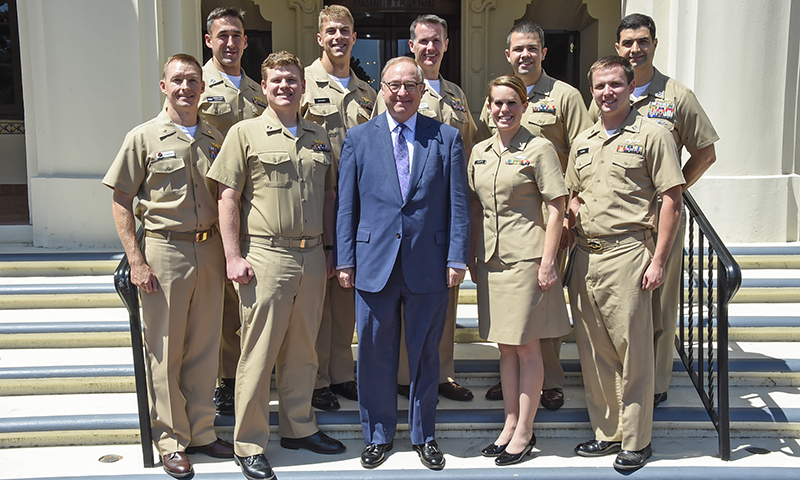 Director of the Chief of Naval Operations Strategic Studies Group (CNO SSG) retired Vice Adm. James P. Wisecup, center, is pictured, Aug. 24, with the recently-selected NPS students who will become CNO SSG Director Fellows. The SSG provides an opportunity for Navy officers to work directly for the CNO on some of the biggest issues facing the Navy.

A select group of seven Naval Postgraduate School students will soon be working directly for the Chief of Naval Operations (CNO) on some of the biggest issues facing the Navy thanks to their selection to this year’s CNO Strategic Studies Group.

Retired Vice Adm. James Wisecup is the CNO SSG Director, and traveled to NPS to interview several candidates, along with NPS President retired Vice Adm. Ronald A. Route and Dean of Students Capt. Matthew Vandersluis. Wisecup, a former CNO Fellow himself, describes the “spark” that he was looking for in SSG candidates.

“For me as the Director of the SSG, I want people who aren’t afraid to stick their nose into a problem, say this is a problem, and this is how we can solve it,” explained Wisecup. “In the end it would be hard for me to lay out a laundry list of qualities, which is part of the reason that I travel out here to meet these people myself. I can meet with them, President Route and the faculty who help us make these decisions.”

Wisecup says he is a firm believer in both the educational and professional value that comes from being an SSG Director Fellow.

“The fellows from NPS will be working with senior officers who have been successful in the military for 25 years,” said Wisecup. “They will have direct access to them on a daily basis, many of which come from different communities. They learn the differences that come from their communities and you realize there are many different ways to approach a problem.”

In last year’s SSG, the Fellows were tasked with researching alternate recruitment methods.

“My thesis topic is directly based on work we did for SSG35,” said past Director Fellow Lt. Leslie Ward. “My thesis is the first step in using social media accounts to target people for recruitment instead of waiting for potential recruits to walk into a recruiting station.”

Each SSG group is given a problem along with the resources to research and innovate how to solve it.

“They have almost unlimited ability to go on behalf of the chief of the Navy to talk to the nation’s experts and discuss issues on whatever the topic is,” said Wisecup. “These young officers are going to have the opportunity to talk to leading authors and researchers, heads of companies, and leading figures in science and industry.”

One of the selectees for this year’s SSG is Lt. Andres Otero, studying in NPS’ Department of Systems Engineering. He described the impact he is hoping to have on the Navy and how being a Director Fellow will have an impact on his career.

“I think it’s a great opportunity to be able to apply real time engineering in a process where the military generally lags,” said Otero. “This experience will replace every elevator conversation for the rest of my career. No one is going to ask me about what I did on the Enterprise as a nuke, they are going to ask me about CNO SSG.”