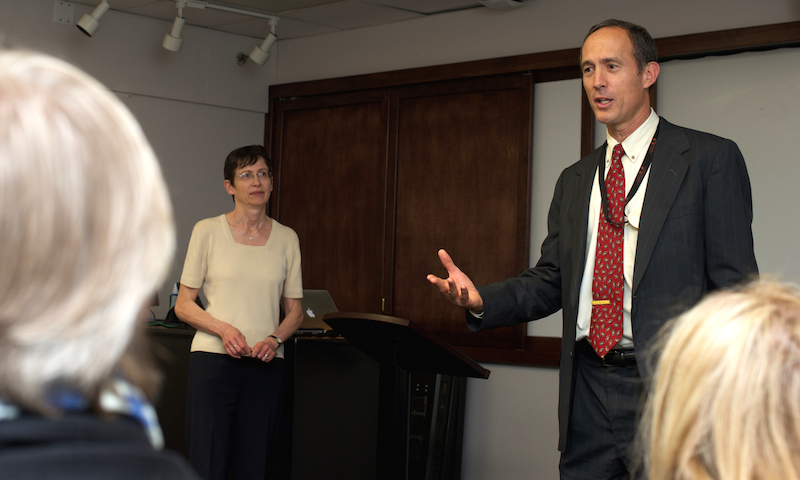 Space Systems Academic Group (SSAG) Professor James H. Newman officially assumed the position of Naval Postgraduate School Acting Provost, Oct. 5. As he steps into his new role on campus, he noted his first order of business is to continue the efforts of former university Provost Dr. Douglas A. Hensler, who retired from the institution in early October to spend more time with his family.

“My first responsibility is to continue Provost Hensler’s work as Provost and Academic Dean, in particular, to maintain the academic standards and accreditation at NPS,” Newman said. “There is much the Provost is expected to do, but at the core of this responsibility is supporting the education of our Navy and Marine Corps officers, and their joint service and international colleagues, especially in our current times of fairly stringent fiscal and budgetary constraints.”

While Newman is known on campus as one of NPS’ resident astronauts – he logged four flights into space aboard the Space Shuttles, spending 43 days in orbit – Newman’s career with NASA also included several management positions, the last one being NASA’s Director of Human Spaceflight Program, Russia, in which capacity he served in Moscow from 2003 to 2006.  Academics, however, has been his singular focus since he joined NPS as a NASA Visiting Professor in 2006, fully transferring from NASA to NPS in 2008 as a Professor in Space Systems.

As he embarks upon his new responsibilities, Newman says he is learning rapidly about the demands of the position of Provost, and will rely on his diverse experience on campus to meet them.

“President Route made it clear that he expects me to fulfill the position of Acting Provost for the immediate future, as he executes his plan for a comprehensive search for a permanent Provost,” he said.

“I have been at NPS for nearly 10 years now, and have been involved with the Faculty Council for the last five or six years, first with the Budget Committee and the Executive Board, and most recently as elected Faculty Chair,” he continued. “This experience has helped broaden my exposure to the entire campus, and the many disciplines our impressive faculty represent. I will rely on this experience and the new relationships to come, as we continue to execute our NPS mission.”

Newman has been an enthusiastic teacher and researcher on campus in his role as Professor and Associate Chair of the SSAG especially in the fields of small satellites and orbital mechanics. While his new responsibilities of Acting Provost will dominate his time, he does still intend to continue some teaching and research in space systems.

“While Acting Provost, I intend to keep up with the Space Systems program here at NPS,” Newman said. “My teaching and applied research in the fields of very small satellites is important to me and valuable for the Navy, and I will continue to work with thesis students and the research in the lab whenever possible.