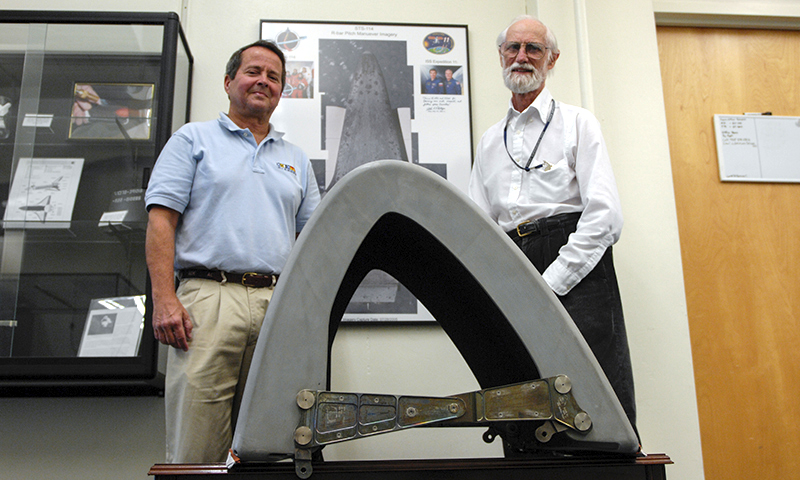 Former astronaut and National Reconnaissance Office Chair Professor retired Navy Capt. Daniel Bursch, left, and Space Systems Academic Group (SSAG) Chair Dr. Rudy Panholzer, right, stand with a recently-acquired piece of the leading edge of a space shuttle wing, Aug. 3. The piece, one of only a few that can be viewed outside a museum, will soon be included in SSAG’s Space for Space display in Bullard Hall.

The Naval Postgraduate School’s Space Systems Academic Group (SSAG) recently acquired a piece of the leading edge of a wing from one of NASA’s Space Transportation System orbiter, also known as a space shuttle. The piece, one of only a few that can be viewed outside a museum, will soon join what is becoming an impressive collection of memorabilia honoring the university’s legacy in space operations and exploration.

“What we have is RCC panel number 11 from the right side of the leading edge of a wing from a shuttle similar to the Columbia,” said former astronaut and National Reconnaissance Office Chair Professor retired Navy Capt. Daniel Bursch. “The leading edge of the wing and the nose are made to take upwards of 3,000 degrees Fahrenheit.”

The wing edge acquired by NPS is from an unlaunched duplicate space shuttle very similar in design to that of the Space Shuttle Columbia. In fact, if it were from the Columbia, it would be located very near the piece that NASA experts say led to the Columbia disaster in February of 2003.

With NPS alumnus Cmdr. William J. McCool on board, a suitcase-sized piece of foam is believed to have dislodged and struck panel number eight on the shuttle’s left side during takeoff. Upon reentry, the subsequent damage allowed hot atmospheric gases to penetrate the internal wing structure, leading to devastating, tragic consequences.

This newest artifact from the space shuttle era is one of several pieces of memorabilia acquired by SSAG in hopes of honoring the university’s lengthy legacy in space and the men and women who have shaped it. NPS boasts more than 40 graduates that have gone on to NASA’s astronaut program.

But space-travelers-as-graduates is far from NPS’ only contribution to DOD operations in space. Countless students have completed their studies in space systems operations or engineering, and have gone on to be leaders, project managers and decision makers, enabling DOD to execute its space mission.

Panholzer, who has served as chair for the SSAG for 29 years and is a former Dean of the Graduate School of Engineering and Applied Sciences at NPS, says student contributions come just about every quarter.

“I have a tendency to look at our students as colleagues based on their experience and background,” said Panholzer. “Students experience a problem in the fleet that they would like to work on, so they find a professor who is available and interested, and their thesis can be that topic.”

Panholzer and Bursch point to the countless advancements in small satellites, or CubeSats, led by SSAG students and faculty as one such area of high impact.

“There has recently been a lot of attention paid to small satellites and to their capabilities,” said Bursch. “[The U.S. has] historically built very large and capable satellites. Now we are looking at what if one of these large ones is no longer available? Being able to recover communications through small and easily ‘launchable’ satellites may be available to us through the research done here at NPS.”