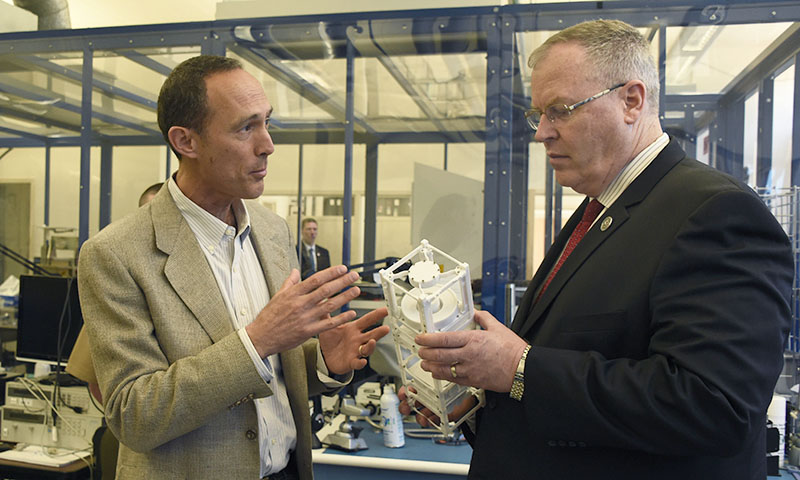 Deputy Secretary of Defense Robert O. Work, right, discusses the university’s latest efforts in CubeSat research with NPS Space Systems Academic Group Professor Jim Newman, left, in the Small Satellite Test and Development Laboratory during a campus visit, June 19. Through a long-standing research effort in small satellites, Newman, along with NPS graduates Cmdr. William Crane and Paul Oppenheimer, and Associate Professor Marcello Romano were recently issued a patent for a novel release actuator, the Micro-coupling Active Release Mechanism, that may one day be used aboard satellites and other spacecraft.

Naval Postgraduate School (NPS) alumnus Cmdr. William Crane along with NPS Professor Jim Newman, NPS Associate Professor Marcello Romano and NPS alumnus Paul Oppenheimer, an engineer with Naval Research Laboratories, were recently issued a patent for a novel release actuator, the Micro-coupling Active Release Mechanism, that may one day be used aboard satellites and other spacecraft.

“SMA is not a naturally occurring substance. It is made of nearly equal parts nickel and titanium,” explained Crane. “The easiest way to think about it is ‘metal shrink wrap.’ Normally, heated metal expands, but SMAs do the opposite, they shrink.”

The release mechanism works likes this: a cylinder made of an SMA in its inert state is inserted into a hardened steel hub. The outer diameter of the shaft is bigger than the hole in the steel hub and when forced together under high pressure, an “interference joint” is created.

The interference joint concept has been used for over a century in the construction of gears.

“When making a gear, the gear is heated so that it expands and the hole in its center gets bigger, then a shaft is placed into the hole. When the gear cools, the shaft is trapped, shrink fit … versus forcing a shaft into a hole, force fit,” explained Crane.

But while the interference joint is not a new concept, Crane’s incorporation of SMAs into the process has taken a tried-and-true method and turned it on its head. When heat is applied to an interference joint made with SMA, the SMA contracts rather than expands, and the resulting loss of diameter in the SMA shaft allows a previously force fit SMA tube to be released with minimal force.

“The process can be used to develop any number of coupling devices. We first patented the concept, then added provisions relative to its various uses and possible configurations,” said Crane. “When I figured out that this is something that could be used in a coupling device for small satellites, it was a real ‘ah ha’ moment.”

The properties of SMAs vary dependent upon their particular metallic make up and whether they expand or retract is dependent upon the stimuli to which they are subjected. The SMA used by Crane and his colleagues, like most SMAs, has the ability to not only contract when heated, but to return to its “memory shape” when it cools, ensuring that the release mechanism can be used repeatedly.

According to Newman, one of the patented mechanism’s strengths is its simplicity.

Oppenheimer worked with Crane on the release mechanism while studying at NPS.

“I was a student at the same time as Cmdr. Crane. I had experience looking at the same SMA, but I was using it for a different application. My experience with the SMA and my professional background in engineering devices of this nature allowed me to work with Cmdr. Crane as he developed the release actuator leading to this patent,” he said.

Oppenheimer sees potential for the patent in the growing field of cube satellites, or CubeSats, small, inexpensive satellites whose versatility and low price tag have opened up a slew of satellite deployment options.

“One of the things that has always been lacking in CubeSats has been a robust, mechanical release device. The things that we use in regular spacecraft do not scale down to the appropriate size for a CubeSat,” said Oppenheimer.

“Other processes can cause up to 20-Gs of impulse force … 20-Gs on a small satellite can be devastating. But with our process very minimal force is necessary,” added Crane.

Oppenheimer also noted that other low-G processes have been less than desirable.

“People have been tying fishing wire around resisters [to create low-g release mechanisms for CubeSats]. NASA wasn't very happy that they were holding things down with fishing line,” explained Oppenheimer. “This was a novel approach to solving [the low-G problem] … it fits the form factor, the size and shape necessary for a CubeSat.”

Both Oppenheimer and Newman see numerous commercial applications for the patent.

“I definitely think there is a market for this. I don't know of any competition that can perform at this level. There is no comparable market for this class of actuator. If you need a high force, low volume actuator, I know of no other device that is in the same class,” said Oppenheimer.

“The invention has applications in new and existing Navy, DOD and commercial satellite systems where dependable release mechanisms are needed,” added Newman. “The invention shows promise as a zero-shock, non-explosive actuator that is secure when exposed to heavy loads, yet reliably actuates upon command.”

Crane has graduated from NPS and returned to the fleet, but like many NPS graduates, the research that he conducted as part of his graduate education may one day contribute to the future of both defense and civilian applications in space operations.