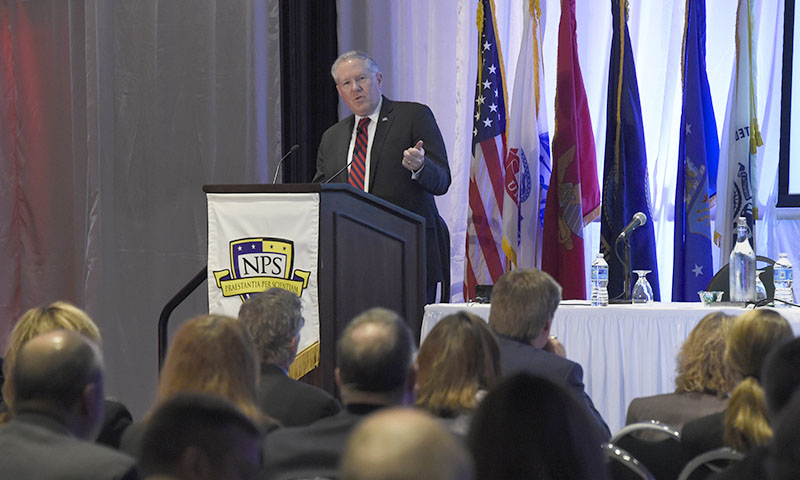 The Honorable Frank Kendall, Under Secretary of Defense for Acquisition, Technology and Logistics, addresses attendees at the Naval Postgraduate School’s 12th Annual Acquisition Research Symposium, May 13. The annual symposium brings together acquisitions professionals from around the world to discuss the latest in research and policy.

The Naval Postgraduate School (NPS) welcomed a who’s who list of the nation’s leading acquisition professionals to the Graduate School of Business and Public Policy’s (GSBPP) 12th Annual Acquisition Research Symposium, May 13-14. The annual symposium brings together acquisition leaders and experts from around the world to discuss the latest developments in acquisition research and policy.

“The way you make progress in acquisition is not by big, flashy programs, but by gradual improvements on multiple fronts over time,” said Kendall. “I think the trains are moving in the right direction.”

Kendall also said that he would give the current Department of Defense (DOD) acquisition program a “B+ or an A-.”

“I give us that grade because we win the super bowl every year,” said Kendall. “We have a remarkably capable force … that gets the job done.”

Assistant Secretary of the Navy Sean J. Stackley kicked of the second day of the symposium by speaking about areas that he believes pose a threat to the acquisition system – rising costs, increasingly technologically-savvy adversaries, and the Budget Control Act.

“I am compelled to question the notion that acquisition is broken if it is true that ours is the strongest Navy in the world,” said Stackley. “This stuff doesn’t happen by accident. It takes talent.”

Stackley’s point is a critical one to the acquisition community, who see their function as a critical partner in national security … after all, without acquisition, a force would be wholly unequipped on the battlefield. Former Under Secretary of Defense for Acquisition, Technology and Logistics, and one of Kendall’s predecessors, Dr. Jacques Gansler, who currently serves as the director of the University of Maryland’s Center for Public Policy and Private Enterprise, described the acquisition process in laymen’s terms.

“[It’s] what you buy, how you buy it, who you buy from, who does the buying and how you support what you bought,” explained Gansler.

NPS Professor of Practice, retired Rear Adm. James B. Greene, is the chair of NPS’ Acquisition Research Program. He has been intimately involved in the acquisition process for decades and believes that NPS students are the core of acquisition workforce of the future.

“Developing critical thinking skills in our future acquisition workforce, that's what we do here at NPS,” said Greene. “The Acquisition Research Program [at NPS] has been ongoing for 15 years now. It provides a research outlet for looking at the defense department’s business practices, policies and procedures.

“The amount of research we have done has really provided a knowledge base for our policy makers. It is something policy makers can go to … so that they don’t repeat the mistakes of the past,” he continued.

Greene and fellow GSBPP Professor Keith Snider have been the driving force behind NPS’ annual Acquisition Research Symposium. Many of the papers presented at the symposium are the result of student/faculty research, which the NPS Acquisition Research Program has funded over the previous year. 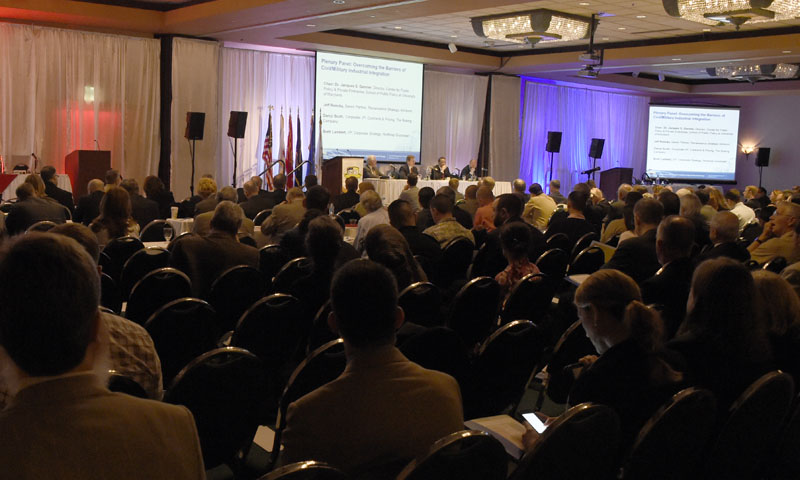 “Other symposiums or conferences that you go to have a very large ‘trade show’ component to them, that is not the case with our symposium,” he continued. “This is a meeting of practitioners and scholars in defense acquisition and it provides them with an opportunity to talk about the direction of the department.”

The symposium also featured panels of acquisition experts from industry including, amongst others, representatives from the Boeing Corporation, Siemens Corporation and Lockheed Martin. Throughout the event students and industry officials sat side-by-side with senior defense acquisition officials and NPS sponsored researchers who offered independent, often divergent, views on the state of the defense department’s acquisition program, but always with an eye toward improving processes.

“We have a crisis right now in the sense that our national security strategy has been technological superior, [but] how can we maintain superiority while congress is slashing the budget?” Gansler asked.

“We need to be efficient and effective, and right now we are not being as efficient and effective as we could be,” said Gansler, who contends that the defense acquisition program, and the U.S. Congress, can learn a lot from industry. “Some of that is due to regulations and requirements, the people that write these rules fail to understand the value of profit.”

To illustrate his point, Gansler pointed to the 186,000 pages of federal regulations that govern the acquisition process, 20 pages of which, according to Gansler, give the specific requirements for purchasing of all things, fruitcake.

“There is also a special 16-page requirement for purchasing hot chocolate,” added Gansler. While the examples are in jest, Gansler says they illustrate the need for the government to spend equal effort examining, and more importantly, adopting commercial, common sense approaches to acquisition.

“In the Packard commission, we compared commercial semiconductors to mil-spec [military specification] semiconductors. The commercial conductors were an order of magnitude lower in cost, an order of magnitude higher in reliability, and more advanced than the state of the art. Why don't we buy them?” asked Gansler. “Because they don't support the 186,000 pages of federal regulation.”

Gansler went on to emphasize the importance of innovation as well, not only from a technology perspective, but “innovation from a process perspective a well,” he stressed.

“Why don't we combine the building of commercial and military equipment in the same plant? We would save more time and money. Why not buy a commercial plane and put some [military] sensors on it?,” he asked.

Another example, Gansler noted, can be seen with JDAMs, or Joint Direct Attack Munitions – essentially guidance kits to convert ‘dumb’ munitions to ‘smart’ munitions. “JDAMs cost $68,000 each, but two commercial companies could have built the same for $18,000 each and their specs were more reliable and more accurate [than the government’s]. Why not use them?” Gansler asked.

“There is going to be resistance to change. But, it makes sense to do these things,” he stressed. “We need some leadership to make these changes.”

Still, Dr. Nancy Spruill, Director, Acquisition Resources and Analysis Under Secretary Kendall’s office, believes that progress is being made. She points to a defense acquisition strategy championed over the past several years known as Better Buying Power 2.0 to support her admonition.

Better Buying Power, the updated Better Buying Power 2.0, and now 3.0, are attempts to implement best practices and improve the DOD’s buying power while improving industry productivity in an effort to “provide an affordable, value-added military capability to the warfighter.”

“If you look at Better Buying Power 2.0, a big part of it is thinking. One of the things that Mr. Kendall says is ‘think.’ If people see a better way of doing things they should speak up and tell us about it,” said Spruill.

For Spruill, that means thinking hard about affordability, cost and the encroachment of bureaucracy.

“In my office, we look at what something should cost … we let the independent cost estimators do their job and then we think about how we can do it better [from a cost perspective]. I am also involved in how we can reduce bureaucracy … looking at bureaucracy and beating it down is something that I focus on,” she said.

While attendees from the latest acquisition research symposium are still winding down from travel to the West Coast, Greene and his colleagues at NPS are already planning ahead for the next iteration. And if all goes as planned, a new batch of students will be ready to rub elbows with senior acquisition officials from around the world as NPS continues to conduct research aimed at improving the DOD’s ability to procure and maintain cutting-edge systems.