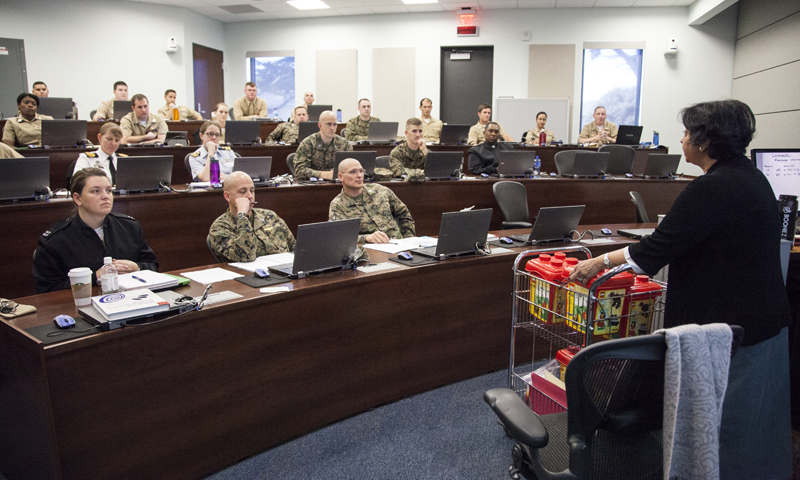 In recent years, the U.S. Navy has recognized the critical role of humanitarian aid and disaster relief (HADR) operations. The Navy’s “Cooperative Strategy for 21st Century Seapower” describes stability operations as a core U.S. military mission, and humanitarian assistance and disaster response as one of six expanded core capabilities for the Navy, Marine Corps and Coast Guard.

With the increased importance given to disaster relief operations, Navy leaders are turning to the Naval Postgraduate School (NPS) to solve some of its most complex HADR problems.

“I was looking for a service-oriented military topic when Hurricane Katrina hit in 2005,” said Apte. “Like many academics, Katrina inspired me to look into HADR research topics.”

Apte, who is an operations management expert with an extensive mathematics background, approaches her analyses of HADR operations from an optimization point of view. And she quickly realized that NPS had an important contribution to make on what have become commonplace missions for commanding officers around the fleet.

Fellow logistics strategist Yoho developed a passion for improving HADR operations after being exposed to Apte’s work, and watching the devastation caused by the Haiti earthquake.

“Naval HADR operations have broad implications beyond war that demonstrate the generosity of the U.S,” said Yoho. “When the earthquake in Haiti happened, I realized that I needed to bring HADR research into my classroom.

“I spent the first 10 minutes of each class I taught speaking about Haiti and providing operations management methods to analyze the problems,” continued Yoho. “For example, we looked at Haiti’s single runway and started using queuing calculations to see how long it would take supplies to arrive. After that experience, I was all-in.”

Both Apte and Yoho were also influenced by their students’ experiences conducting HADR operations, with many expressing frustration with the disaster relief status quo.

“One of my students, Lt. Cameron Ingram, described responding to a disaster in Bangladesh while serving aboard a destroyer. His ship sat 25 miles off the coast, unable to conduct operations, because it was not able to enter the shallow harbor closest to where the disaster occurred,” said Apte.

A business school may not seem like a natural fit in conducting HADR research, but Apte insists that GSBPP’s acquisition, financial management and logistics orientated faculty and student body possess the ideal mix of academic and operational expertise necessary to tackle HADR challenges.

“We have the necessary faculty with the expertise to make it work,” said Apte. “We look at processes and at weakness within those processes, that sort of education lends itself naturally to looking at HADR problems.”

“A lot of our background in operations and logistics management deals with process management and we tend to think in terms of processes. We have to ask, when do these processes start, when do they end, what is the capacity, where are the bottlenecks, when do you have to hand off to another organization and how do you mitigate quality costs?” added Yoho.

And while the logistics and supply chains that support HADR operations are similar to those that are used to support both industry and other DOD operations, they do require considerable foresight and planning - luxuries that are rarely afforded to disaster relief professionals.

“HADR logistics necessitate a response supply chain, and these supply chains are very difficult to manage,” explained Apte. “There are critical time windows that must be met and a great need for collaboration amongst a diverse array of players ranging from government agencies to military and regional actors.”

“When conducting HADR operations we have to look at priorities. For example, people need water more than food, so how do we get the water in first? We would prefer to avoid a situation where we just push items forward but sometimes that is necessary if we do not have clear demand signals and priorities clearly indicated,” added Yoho.

“The idea was to help the Navy to plan for disasters in the future with the focus on costs,” said Ures. “The DOD does not set aside funds in the expectation of war, disaster or other unexpected catastrophes, obligation of those funds is contingent on the event actually occurring.”

Ures looked at the costs associated with everything from hospital ships to flights in and around disaster centers. His analysis drew upon case studies involving the 2004 Indian Ocean Tsunami, which costs the U.S. Navy $63.8 million, the 2010 Haiti earthquake, which cost $155 million, and the 2010 Pakistan floods, which cost $22 million.

With costs like these, Ures felt that it was necessary to look at the manner in which HADR budgets are forecast and to develop priorities that matched needs against capabilities. He identified three areas in particular where the Navy could better employ HADR assets.

“The U.S. navy should focus on accurate forecasting of the required level of services for helicopter vertical lift capability, ship platforms that facilitate that service, and hospital ships. Getting these three functions right will better utilize the Navy’s unique core competencies,” said Ures.

He also looked at the role of information and the degree to which increased coordination maximizes the ability of relief professionals to serve devastated areas.

“The best way to maximize the capabilities that currently exist will be through improved information sharing … applying new technologies from the fields of human-terrain-mapping and crowdsourcing will allow the Navy to plug into the already substantial aid networks,” said Ures. “Sharing information that allows the Navy to deliver the right aid at the right time will do more to maximize scarce resources.”

NPS student and faculty research into HADR operations has caught the attention of policy makers throughout the fleet.  NPS Professor of Practice and Acquisitions Chair retired Rear Adm. James Greene has been working with Navy leadership in the Pentagon and around the fleet to match Navy study requirements against NPS student researchers.

“The JHSV is a catamaran with a lot of space that was designed to be reconfigured to meet specific mission requirements. Rear Adm. Lewis reached out to conduct an analysis of the JHSV usage in HADR operations,” said Greene.

“Our hope is that these ships will contribute to HADR and that they will be able to be reconfigured in the future to solve mission problems that have not even emerged or been imagined without having to build a new class of ships to deal with the threat,” said Greene.

HADR research efforts at NPS are revealing. The mid- to senior-level military students that make up the majority of NPS’ unique student body bring a degree of operational and real-world experience to the classroom that would be difficult to replicate in a civilian graduate institution and whose impact is readily apparent in GSBPP’s HADR research initiatives.