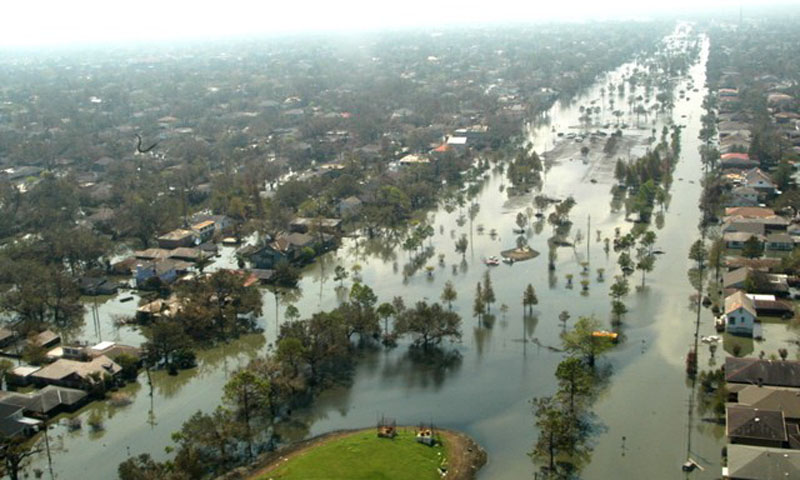 NPS students and faculty deploy to the Central Philippines to provide relief following Tyhpoon Haiyan, but it’s on campus where the bulk of university efforts to improve HADR operations happen every day.

At approximately 4:30 a.m. on Friday, November 8, Typhoon Haiyan first introduced its power to the modest municipality of Guiuan in the Eastern Samar province of the Philippines. Minutes later, nearly every single one of its 50,000 men, women and children had nothing.

By the end of the day, Haiyan had met a broad swath of the central Philippines, and it had left incomprehensible devastation across the Southeast Asia nation … thousands had died, millions were homeless, and billions in damage had left the country in ruin.

Natural disasters, and the severity of damage caused by them, are on the rise. For the United States Armed Forces, and the Navy in particular, large-scale humanitarian assistance and disaster relief operations, or HADR, are already a primary warfighting capability.

Operation Damayan, the HADR operation in response to Haiyan’s devastation, was a massive, multinational, joint service event with thousands of military personnel, the USS George Washington (CVN-73) and her escort ships, and several tons of relief supplies. This is certainly not a new capability for Sailors and Marines in the U.S. Pacific Command area of responsibility, where more than 20 major HADR operations across the rim have been executed in less than that many years.

The bottom line, operating forward means many things for American power projection and immediacy in response to any and all threats … But it also means the U.S. is ready to respond when needed, period. And that is a powerful enabler to developing long-term partnerships with our allies and friends throughout the Pacific, and the world.

For this reason, and certainly others, former Chief of Naval Operations retired Adm. Gary Roughead and his counterparts of the maritime services described stability operations, and humanitarian assistance and disaster response, as core missions and capabilities for the Navy, Marine Corps and Coast Guard. And today’s service chiefs, Combatant Commanders, and senior defense leaders in the Pentagon haven’t altered that course since.

When Typhoon Haiyan struck late last year, the unfolding scenario was one that NPS Hastily Formed Networks (HFN) Research Group Director Brian Steckler, a Lecturer in the Department of Information Sciences, had seen before. Steckler has taken teams of students to the aftermaths of Hurricane Katrina, the earthquake in Haiti, and the 2005 tsunami in southeast Asia, among others.

View the February 2014 issue of In Review to learn more about NPS student research into Humanitarian Assistance and Disaster Relief.

Steckler’s research focuses on the rapid deployment of communications capabilities when every infrastructure needed to make them happen is destroyed.

“When you think of what’s most needed in an emergency like this, water, food, shelter and medical supplies are what usually come to mind,” said Steckler. “But emergency communications should be at the top of the list, because without them, you can’t coordinate the others and can’t operate.”

“The communications link is critical, we cannot coordinate if we can’t communicate,” echoed NPS student Marine Corps Maj. Travis Beeson of Versailles, Ohio. “A major complication in a situation like this is aid distribution – some areas do not get enough assistance and others get too much.”

Students focus on the technologies in the classroom and in their theses – concepts of network communications, alternative energy development on the front lines, etc. But they also gain a strong sense of satisfaction in knowing their military education is providing real value that goes beyond the halls of academia.

“The Hastily Formed Networks group is not just in it for the academic value. We have deployed to other major disasters where we have provided real support to people in desperate need,” said Beeson, who was actually in the Philippines shortly before the typhoon to establish a baseline assessment of the communications infrastructure in support of a thesis he is writing about communications in disaster relief operations.

Lt. Cmdr. Anthony Bumatay is a former Communications Officer on board the aircraft carrier USS Carl Vinson (CVN-70). But as a native Filipino (see sidebar), his communications capabilities proved to help the team in more ways than one.

“When you engage in humanitarian operations overseas, the first obstacles to overcome are cultural and language barriers,” said Bumatay, who established a reliable communications link between the multinational command center (MNCC) in Cebu, and personnel operating in disaster areas.

“I was fortunate to be able to speak the language fluently. I understood the culture, and more importantly, my professional relationships and contacts within the country helped us coordinate efforts,” he added.

Meanwhile, back on the university’s main campus in Monterey, Calif., dozens of students and faculty across several curricula are charging forward on a wide range of theses projects analyzing every aspect of HADR operations imaginable, from command and control to supply chain logistics to emergency response management.

“I was looking for a service-oriented military topic when Hurricane Katrina hit in 2005,” said Apte. “Like many academics, Katrina inspired me to look into HADR research topics.”

Apte, who is an operations management expert with an extensive mathematics background, approaches her analyses of HADR operations from an optimization point of view. And she quickly realized that NPS had an important contribution to make on these common missions for commanding officers around the fleet.

Fellow logistics strategist Yoho developed a passion for improving HADR operations after being exposed to Apte’s work, and watching the devastation caused by the Haiti earthquake.

“Naval HADR operations have broad implications beyond war that demonstrate the generosity of the U.S,” said Yoho. “When the earthquake in Haiti happened, I realized that I needed to bring HADR research into my classroom.

“I spent the first 10 minutes of each class I taught speaking about Haiti and providing operations management methods to analyze the problems,” continued Yoho. “For example, we looked at Haiti’s single runway and started using queuing calculations to see how long it would take supplies to arrive. After that experience, I was all-in.” 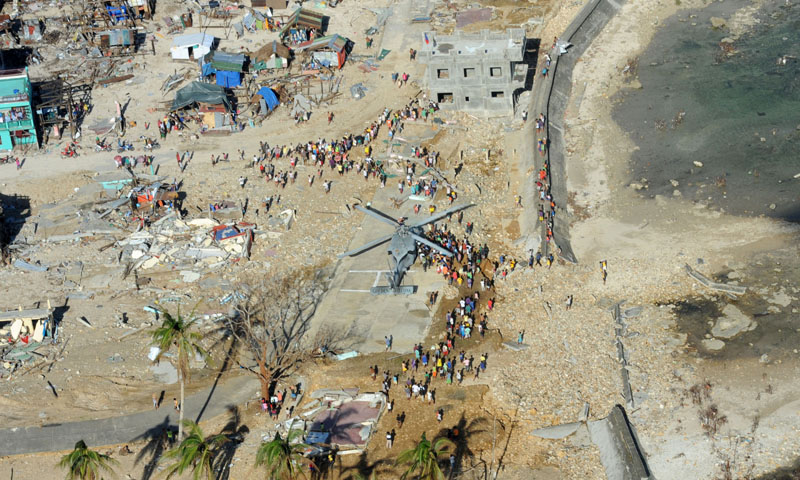 Philippine citizens gather around an MH-60S Sea Hawk helicopter from the Golden Falcons of Helicopter Sea Combat Squadron 12 as it delivers relief supplies in support of Operation Damayan. The George Washington Carrier Strike Group supported the 3rd Marine Expeditionary Brigade to assist the Philippine government in response to the aftermath of Super Typhoon Haiyan in the Republic of the Pilippines.

A business school may not seem like a natural fit in conducting HADR research, but Apte insists that GSBPP’s acquisition, financial management and logistics orientated faculty and student body possess the ideal mix of academic and operational expertise necessary to tackle HADR challenges.

“We have the necessary faculty with the expertise to make it work,” said Apte. “We look at processes and at weakness within those processes. That sort of education lends itself naturally to looking at HADR problems.”

“A lot of our background in operations and logistics management deals with process management and we tend to think in terms of processes. We have to ask, when do these processes start, when do they end, what is the capacity, where are the bottlenecks, when do you have to hand off to another organization and how do you mitigate quality costs?” added Yoho.

And while the logistics and supply chains that support HADR operations are similar to those that are used to support both industry and other DOD operations, they do require considerable foresight and planning - luxuries that are rarely afforded to disaster relief professionals.

“HADR logistics necessitate a response supply chain, and these supply chains are very difficult to manage,” explained Apte. “There are critical time windows that must be met and a great need for collaboration amongst a diverse array of players ranging from government agencies to military and regional actors.”

“When conducting HADR operations we have to look at priorities. For example, people need water more than food, so how do we get the water in first? We would prefer to avoid a situation where we just push items forward but sometimes that is necessary if we do not have clear demand signals and priorities clearly indicated,” added Yoho.

One of Apte’s students, Cmdr. Stephen Ures of Burbank, Calif. with the Navy Service Cost Agency, applied his NPS MBA to HADR operations by conducting an extensive cost analysis of recent relief operations.

“The idea was to help the Navy to plan for disasters in the future with the focus on costs,” said Ures. “The DOD does not set aside funds in the expectation of war, disaster or other unexpected catastrophes, obligation of those funds is contingent on the event actually occurring.”

Ures looked at the costs associated with everything from hospital ships to flights in and around disaster centers. His analysis drew upon case studies involving the 2004 Indian Ocean Tsunami, which costs the U.S. Navy $63.8 million, the 2010 Haiti earthquake, which cost $155 million, and the 2010 Pakistan floods, which cost $22 million.

With costs like these, Ures felt that it was necessary to look at the manner in which HADR budgets are forecast and to develop priorities that matched needs against capabilities. He identified three areas in particular where the Navy could better employ HADR assets.

“The U.S. navy should focus on accurate forecasting of the required level of services for helicopter vertical lift capability, ship platforms that facilitate that service, and hospital ships. Getting these three functions right will better utilize the Navy’s unique core competencies,” said Ures.

He also looked at the role of information and the degree to which increased coordination maximizes the ability of relief professionals to serve devastated areas.

“The best way to maximize the capabilities that currently exist will be through improved information sharing … applying new technologies from the fields of human-terrain-mapping and crowdsourcing will allow the Navy to plug into the already substantial aid networks,” said Ures. “Sharing information that allows the Navy to deliver the right aid at the right time will do more to maximize scarce resources.”

Student theses like Ures are far from unique … In fact, more than 40 theses covering all aspects of HADR operations have been completed at NPS over the past three years, representing a comprehensive resource for Task Force planners and commanding officers across the service.

And given the likelihood that the capabilities required across the HADR mission set will only increase, the Naval Postgraduate School is poised to leave a powerful mark on the Navy’s forward presence around the world.