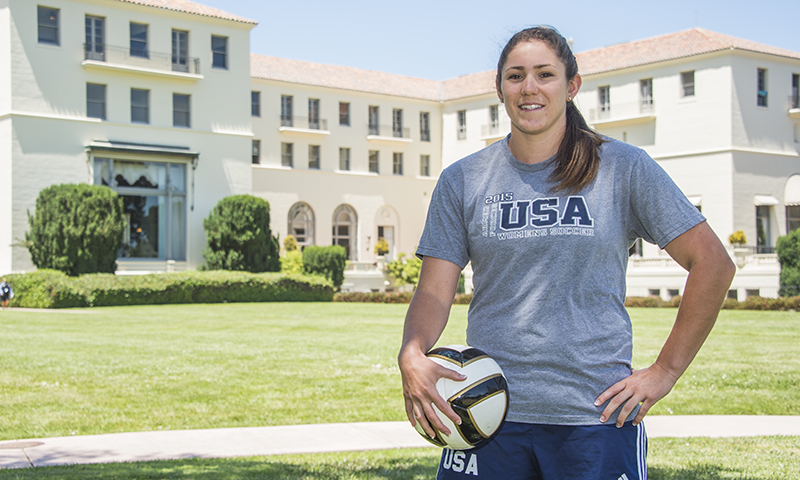 Before Marine Corps Capt. Kate Herren was a student in the Space Systems and Operations program at the Naval Postgraduate School (NPS), she competed at the highest levels of her sport with the U.S. Naval Academy and Armed Forces Woman’s Soccer teams.

For many, competitive sports provide a great outlet that teaches important lessons such as discipline, comradery, teamwork and determination. For Herren, a passion for sports has not only played a big role in preparing her for the rigor of her studies here at NPS, but also prepared her for her military career as a whole.

Born and raised in Auburn, Wash., Herren attended the United States Naval Academy where she played soccer for four years, becoming team captain senior year until she was commissioned as a second lieutenant in the Marine Crops in 2012.

“Athletics was an inner drive that I was kind of born with,” said Herren. “I am a very competitive person and growing up with an older brother, I always wanted to do what he was doing. If the boys were throwing the football, I wanted to throw it just as far. As I grew up, it became more serious and that drive really carried me through my career.”

According to Herren, her athletic ability runs in the family. Her father played baseball in college and her mother was a gymnast. Additionally, her brother played baseball professionally for the Texas Rangers in the minor leagues for five years before going back to college to play football, while her sister is National Collegiate Athletic Association (NCAA) Division III softball champion.

“One thing that really motivates me is that I have a really close-knit family and friends, and everyone is always so supportive,” said Herren. “A lot of my friends in the military with me are also getting up at five in the morning to work out and go to school. It isn’t just me that is trying to juggle my life, it is everyone that is close to me, and if they can do it so can I. If I am going to do something I am always going to do it to the best of my ability so I can wake up every morning and make a difference in a positive way.”

In 2015, Herren joined the Armed Forces Woman’s Soccer Team and competed in the 6th International Military Sports Council (CISM) World Games, which were hosted in Mungyeong, South Korea. The event was the largest military sports event ever held in South Korea with approximately 8,700 athletes from 110 countries competing in 24 sports.

“One thing I really loved about the CISM World Games is that it was an amazing opportunity to relate with so many men and woman in the military from other countries, and really come together over a common thing,” said Herren. “It was incredible that no matter where we came from, when it came to soccer we all spoke the same language. We ended up tying two games and losing one, but we were all proud of our efforts and what we accomplished there.”

During that time, Herren was stationed with the Marine Corps Air Station New River in Jacksonville, N.C., where she served as an air-traffic controller in support of operations with the 26th Marine Expeditionary Unit. Following the CISM games, she deployed to the 6th Fleet area of operations. During that time, she operated alongside military service members of Oman, Kuwait and Bahrain in several subject matter expert exchanges.

Following deployment, she again traveled with the Armed Forces Woman’s Soccer to compete in the 2016 Woman’s Military World Cup in France. She also began studying Space Systems and Operations at NPS. Herren says that her interest in the topic comes from her grandfather, whose service as a Navy pilot inspired her from a young age.

“Every kid’s dream when they are little is to be a NASA astronaut,” said Herren. “When I came here, I was worried that everyone is going to be better than me and I would get stuck, but everyone has come together to help one another. To me, that’s the amazing thing about our space program. Whenever someone has a flaw, there is someone there to pick you up.”

Along with her studies in space systems and soccer, Herren has also branched out into rugby and was invited to the Elite Athlete Training Center in Chula Vista, Calif., headquarters for the Women’s U.S. National Rugby Team, where she competed with the United State’s national rugby sevens team, The Eagles. Herren says this balance of sports and her studies have been a huge part in her success.

“They actually go together really well,” said Herren. “The cohort of what we have here at NPS is a great team and after class and practice we get together, we review our notes, we work on projects together, we make sure we all stay on top of our work and help each other out to make sure that we live up to the Marine Corps value of never leaving a man behind.”

Herren has one more year at NPS which will be dedicated towards her thesis. She is currently working on encryption on CubeSats (small satellites) with several professors, and hopes to write her thesis on bettering military communications with these small space systems.

“At the end of the day sometimes you forget that you are human, and so is everyone else,” said Herren. “Sometimes there is only so much you can do, and that is ok. But at the same time, all this has built me up to know how much I can handle, and I’ve realized how much the human body and mind can take and I know now what I am capable of. These last five years really have been an amazing experience.”