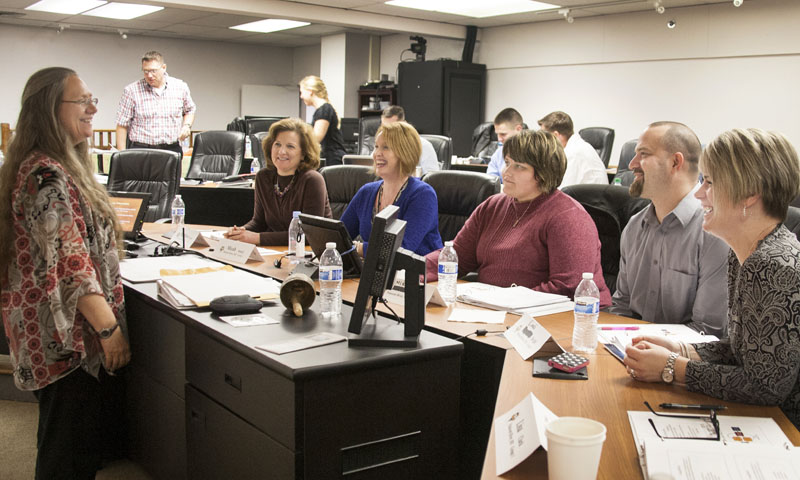 Graduate School of Business and Public Policy Associate Professor Deborah Gibbons introduces her teams management course to students from the Naval Supply Systems Command during a classroom break. The five, Adrianna Ward, Melody Small, Wendy Zimmerman, Daryll Kuhn and Stacey Fry, from left to right, are the first ever to be sponsored by their command for the two-year Executive Master in Business Administration (EMBA) program.

Adrianna Ward, Melody Small, Wendy Zimmerman, Daryll Kuhn and Stacey Fry, are the first ever to be sponsored by NAVSUP in Mechanicsburg, Pa., for the course. Four of the five new degree candidates are seasoned fiscal management professionals and have worked at NAVSUP for several years. Small has been with the organization for an impressive 27 years of service.

“I’ve worked at the Mechanicsburg Naval base for the Department of the Navy since 1987 and now I work at NAVSUP headquarters as a supervisor in the Office of the Comptroller. Having the opportunity to earn an EMBA is great,” said Small.

Kuhn has worked 13 years at the NAVSUP Business Systems Center in the Comptroller’s Office and is excited to use what he’s learned in just one week.

“I see the benefit of the teams management course to be immediate. I'm a team leader for four comptroller positions ranging from reimbursable work to labor analysis.  Although we may not exactly align to the definition of a team per our managing teams class during orientation week, there are many things that I’ve learned from that class which will hopefully help to be an effective team leader,” said Kuhn.

The EMBA course candidates have had to absorb much in just a few days. For some it's been years since being in an academic environment.

“I haven't had any formal classroom training since 1997 when I graduated college,” said Kuhn. “So the orientation week was great to give the brain a shock as to what is coming.”

Zimmerman has worked at NAVSUP headquarters for seven years and says he is also looking forward to getting back into the classroom.

“The last time I was in school was during my undergraduate program at Pennsylvania State University … nine years ago. I found it difficult to return to the routine of homework, quizzes and actively listening and focusing for long periods of time. However, the NPS professors and staff have been great so far about understanding that we have full-time jobs and lives outside of the EMBA program. I'm really looking forward to the next two years,” said Zimmerman.

Ward is an Information Technology Specialist and works in the NAVSUP Business Systems Center’s information support enterprise, and is the only non-financial management staff member of the group. However, she is excited to be participating in the first cohort from NAVSUP.

“I absolutely loved the management of teams class,” said Ward. “Professor Gibbons truly provided valuable insights on how to look at team relationships and extract the best from all members. I am so excited to have this opportunity and be an NPS student.”

The “Mechanicsburg 5,” as they have come to be known on campus, have already returned to their jobs at NAVSUP, and are eager to get started on their academic journey, which will end when they graduate in March of 2016.

NPS’ EMBA program is part of the Graduate School of Business and Public Policy’s (GSBPP) portfolio of unique defense-focused business curricula. GSBPP has the distinction of being one of the only institutions in the world to have its graduate management programs accredited by both the Association to Advance Collegiate Schools of Business (AACSB), and the National Association of School of Public Affairs and Administration (NASPAA).