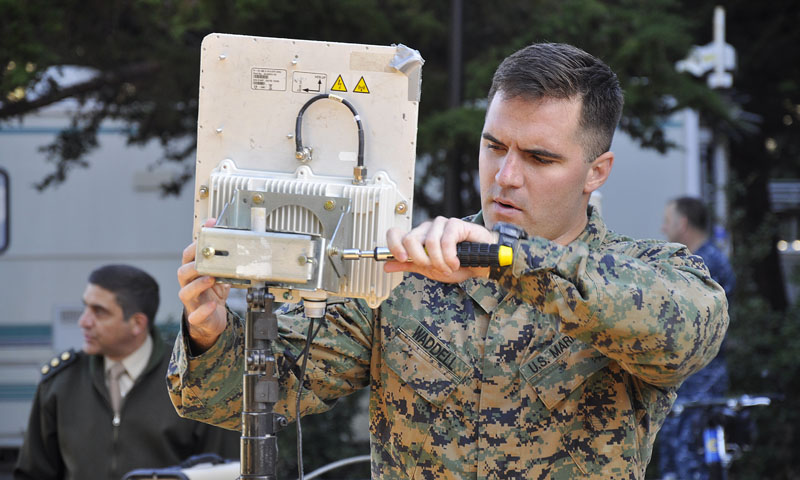 With the number of injured and dead continuing to rise, the need for communications and coordination between disparate non-governmental Organizations (NGOs), humanitarian assistance/disaster relief (HA/DR) professionals, and the Philippine government has taken on increased urgency.

HFN Research Group Director, and NPS Department of Information Sciences Lecturer Brian Steckler deployed to the region in advance of his student team to conduct early communications assessments. The majority of his team is now on the ground and preparing to join him in the Central Philippines.

“I am working with the Marine Corps Pacific Forces Experimentation Center in support of the Third Marine Battalion (3rd MEB). The 3rd MEB is in charge of the initial Marine response to Typhoon Haiyan,” said Steckler. “My first step will be to find out where they want to use our communications capabilities and to conduct an assessment to determine local communications needs.”

HFN teams equipped with satellite-enabled, handheld devices hope to be given the green light to conduct rapid Information and Communication Technology (ICT) assessments shortly. The devices will use an NPS Common Operational Research Environment Lab, or CORE Lab, developed application, dubbed Lighthouse, to aggregate data which will be sent to Maui’s Pacific Disaster Center (PDC) to be displayed and analyzed by the international early responder community conducting HA/DR operations in the Philippines and abroad.

NPS’ HFN team will be using the advanced communications tools at their disposal to create hastily formed networks while Rapid ICT Assessments Teams (RTAT) simultaneously conduct their own activities. If successful, HFN Team constructed networks will fill communications voids and allow for increased disaster relief coordination and emergency response to some of the storm ravaged nation’s most desperate locales.

“The communications link is critical, we cannot coordinate if we can’t communicate,” said NPS student and U.S. Marine Corps Maj. Travis Beeson of Versailles, Ohio. “We will be establishing emergency communications between critical HA/DR centers, hospitals and NGOs. 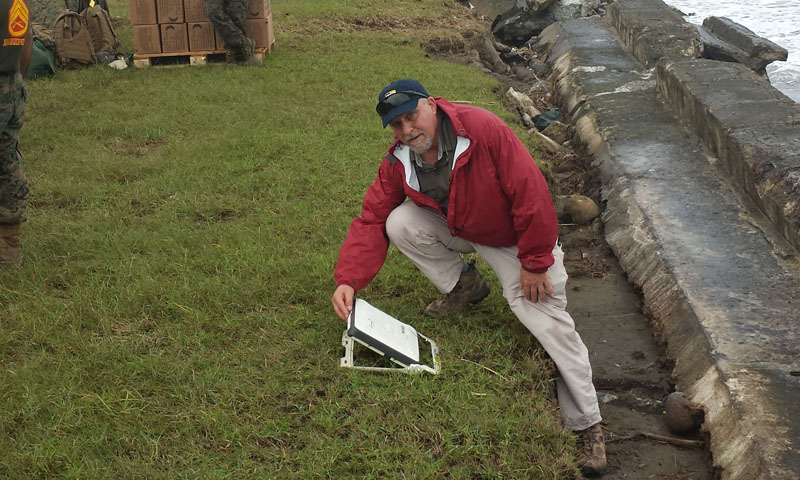 Onsite in the central Philippines in advance of the student team, NPS Department of Information Sciences Lecturer Brian Steckler begins initial assessments of communications capabilities to ensure the Hastily Formed Networks students head to the locations where they are needed most. Photo courtesy of Brian Steckler.

“A major complication in a situation like this is aid distribution – some areas do not get enough assistance and others get too much. We plan on helping to establish the communications infrastructure that will allow disaster relief professionals to get to the areas where aid is needed most,” continued Beeson.

Leveraging his ongoing research with a mobile satellite company, Steckler hopes to utilize the organization’s Broadband Global Area Networks (BGAN) service to make this sort of large-scale disaster relief coordination possible. BGAN devices, which are satellite terminals about the size of laptops, can be set up in five minutes to create a 100-meter Wi-Fi cloud connecting users to the Internet for instant e-mail, chat, web, voice and video communications.

Steckler also hopes to establish a series of networks utilizing the HFN Group’s meshed Wi-Fi components. Steckler used these devices previously during the Haiti earthquake response, the response to Hurricane Katrina, and in response to the 2004 South East Asian tsunami. The meshed networks can be used to offer near-immediate connectivity for hastily built airstrips, hospitals and command and control centers.

“I thank God for this opportunity to get out there. I’ve been to the Philippines before, and they are generally a happy and resilient population. Events like this really break your heart,” Beeson said. “I am excited to be a part of this international effort, to have the opportunity to work with the NGOs that are on the ground and to work with a major regional ally.”

While the HFN group’s primary mission is to support the education of military officers, Beeson notes that the group’s work also provides real value that goes beyond the halls of academia.

“The Hastily Formed Networks group is not just in it for the academic value. We have deployed to other major disasters where we have provided real support to people in desperate need,” said Beeson proudly. Ironically, Beeson was just recently in the Philippines to establish a baseline assessment of the Philippine communications infrastructure in support of a thesis he is writing about communications and disaster relief operations.

Capt. Kevin McMullen of Redding, Pa. is another NPS student deployed with the HFN group.

“I am happy to help out, and to have the opportunity to volunteer. I am a communications officer in the Marine Corps and I am used to setting up equipment in distressed locations,” said McMullen.

Argentine Army Col. Anibal Intini is the only international officer in the group. He came to NPS to study Command, Control, Communications, Computers and Intelligence (C4I).

“There are a lot of people with a lot of needs and this is a great chance to help … We are going to deploy the communications system and keep it working to meet the needs of the NGOs that are working in the area,” said Intini. “I also hope to be able to do some communications systems maintenance on equipment that has been damaged by the storm.”