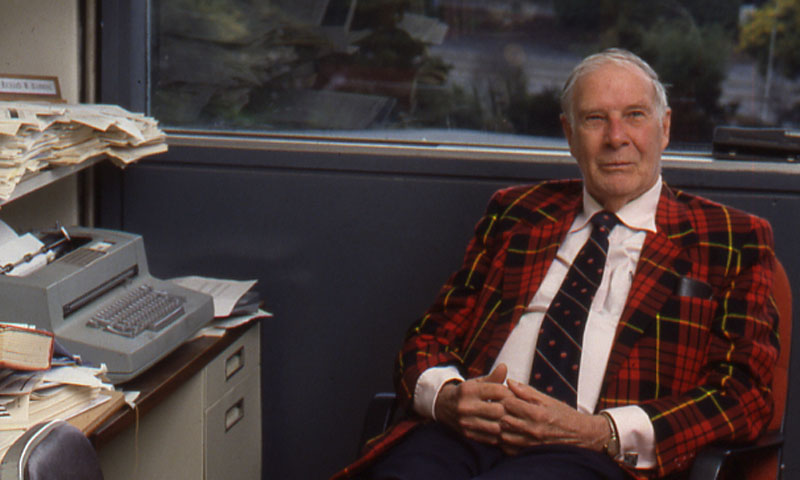 Naval Postgraduate School (NPS) Professor Richard W. Hamming is pictured in his NPS office, circa 1980s. Hamming taught at NPS for 21 years after working on the Manhattan Project and a successful career at Bell Telephone, where he wrote a series of self-correcting codes, known popularly as the Hamming Codes that are still in use today.

“The purpose of computing is insight, not numbers,” once noted renowned mathematician and former Naval Postgraduate School (NPS) Professor Richard W. Hamming. For the man who set aside a lifetime of groundbreaking discoveries for the love of teaching, at a self-imposed $1 per year salary, it would prove to be a prophetic statement indeed.

Hamming held his final lecture at NPS in December of 1997, some 17 years ago, but his presence is as identifiable on campus as the vibrant red plaid sport coat he frequently donned to draw attention … “Because great ideas require an audience,” he would say.

Hamming’s name is front and center each year, when the university honors its best teacher with the Richard W. Hamming Award for Teaching, and its top researcher with the Hamming Interdisciplinary Achievement Award. And in Ingersoll Hall, his namesake supercomputer, “The Hamming,” continues to support the student and faculty researchers that rely upon it.

Internationally, Hamming may best be known for his self-correcting error codes, the Hamming Codes, which changed the game in computing with regard to the transmission of data. But at NPS, Hamming was best known as a teacher who helped his students learn how to be insightful. His course, “’The Art of Doing Science and Engineering: Learning to Learn,” affectionately known as “Hamming on Hamming,” was always full and was broadcast to prominent labs throughout the world.

In the classroom, Hamming was quick to go against tradition and was known to ruffle more than a few feathers. But though he was at times eccentric, he was clearly beloved by his students and associates. His varied idiosyncrasies were celebrated rather than derided. An illustrative example that poked fun at his love of chocolate is revealing. He was once gifted with a bit of calligraphy on which was written, “Good teachers get apples, great teachers get chocolate.”

He insisted throughout his career that his aim was to inspire – to push the boundaries of what was possible at the time. He sought to illicit excitement in his students, and was critical of the status quo.

“The way mathematics is currently taught it is exceedingly dull,” Hamminq said in a piece by Edmund Robertson capturing Hamming’s views on education. “In the calculus book we are currently using on my campus, I found no single problem whose answer I felt the student would care about! The problems in the text have the dignity of solving a crossword puzzle – hard to be sure, but the result is of no significance in life,” Robertson wrote, quoting Hamming.

In a piece authored by Hamming himself in 1987, he offered further insight into his teaching methodology.

“In teaching my classes, I try to smuggle in a little of what it is to do great work – to inspire a few students into greatness. I have always observed that if you do not work on important problems, you are not likely to do important work. Most so called scientists spend all their lives working on ‘safe’ problems,” wrote Hamming.

“He was a deeply influential on me,” said Brutzman. “He used to say, ‘If becoming better is important, it must be worth 10 percent of my time.’ And he would live up to this maxim by spending Friday afternoons thinking great thoughts and learning about how other people thought,” Brutzman recalled.

Firmly believing that Hamming’s lectures are as relevant today as they were when first offered, Brutzman is leading an effort to re-launch Hamming‘s course to distance learning students.

“Hamming’s capstone course … intended to instill a ‘style of thinking’ that would enhance one's ability to function as a problem solver of complex technical issues,” explained Brutzman.

“He related many research collaborations, discoveries, inventions and achievements of his own … these presentations provided objective analysis about the thought processes and reasoning that took place as Dr. Hamming, his associates, and other major thinkers, in computer science and electronics progressed through the grand challenges of science and engineering in the 20th century,” Brutzman continued.

“[Hamming’s codes] laid the foundation for several breakthroughs in computing and information sciences. Contemporary researchers continue to extend the theory and to make practical uses of these codes as the information age unfolds,” said Sanders.

NPS colleague Herschel H. Loomis and former Under Secretary of the Navy David S. Potter, in a writing for the National Academy of Engineering, reproduced a citation granted to Hamming by the Franklin Institute that described Hamming’s contributions to computer science in this area.

“Hamming’s achievement enormously improved the practical application of early computers by substantially increasing their reliability. But it is even more remarkable that many modern computers still use Hamming’s techniques to correct errors in main memory,” they wrote. 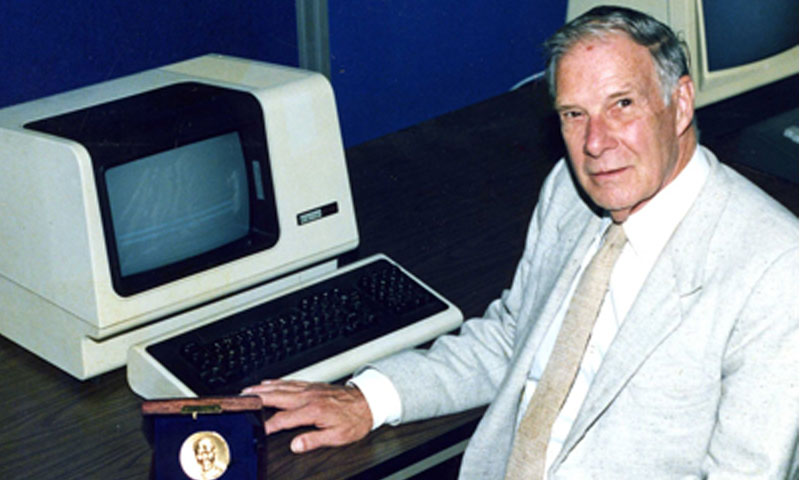 Hamming is pictured with the IEEE Hamming Medal in an NPS laboratory following the award’s establishment in 1986. In addition to being its first recipient, Hamming was presented with several other honors and awards, including ACM’s prestigious Turing Award, and was elected to the National Academy of Engineering.

“Although modern computers have very reliable fundamental components, the huge number of such components, e.g. the bits in a computer’s main memory, means that the probability of an erroneous result would be significant without Hamming Codes and similar codes that Hamming inspired. It is not an exaggeration to say that modern graphical computing which requires large main memories, would be impractical without Hamming’s invention,” they continued.

Hamming also played significant roles in major U.S. breakthroughs in applied defense research, none more notable than his brief stint with the Manhattan Project. Hamming joined the effort in 1945, where he ran the IBM computers solving detailed equations for the physicists. The magnitude of the research was not lost on Hamming, as evidenced by this insightful passage taken from his, “Mathematics on a Distant Planet.”

“At Los Alamos ... we were designing atomic bombs. Shortly before the first field test … a man asked me to check some arithmetic he had done, and I agreed, thinking to fob it off on some subordinate. When I asked what it was, he said, ‘It is the probability that the test bomb will ignite the whole atmosphere.’ I decided I would check it myself!

“The next day when he came for the answers I remarked to him, ‘The arithmetic was apparently correct but I do not know about the formulas for the capture cross sections for oxygen and nitrogen – after all, there could be no experiments at the needed energy levels.’ He replied, like a physicist talking to a mathematician, that he wanted me to check the arithmetic not the physics, and left. I said to myself, ‘What have you done, Hamming, you are involved in risking all of life that is known in the universe, and you do not know much of an essential part?’” Hamming is pictured with the IEEE Hamming Medal in an NPS laboratory following the award’s establishment in 1986. In addition to being its first recipient, Hamming was presented with several other honors and awards, including ACM’s prestigious Turing Award, and was elected to the National Academy of Engineering.

Hamming’s duration on the Manhattan Project would last only a year, at which time he accepted a position with Bell Telephone, where he developed his most enduring contributions to computing over three prosperous decades. It was here he would develop the Hamming Codes, the Hamming Distance and several other breakthroughs in advanced coding and programming.

But at NPS, he will always be remembered as a gifted educator – a professor who desired more than anything else to inspire future generations to “think great thoughts.” He wanted others to experience the thrill of scientific discovery, something he once described as “better than wine, women and song put together.”

Hamming had an obvious passion for teaching, and thoroughly enjoyed working with NPS’ unique student body. In fact, it would seem even leaving NPS would be something Hamming preferred to move on from … he completed his final lecture at NPS in mid December, and unexpectedly passed away just three weeks later.

Today, Hamming’s legacy continues on across campus through the work of those who have earned awards bearing his name, through the research enabled by his namesake supercomputer, and through his signature course soon to be brought back to life.