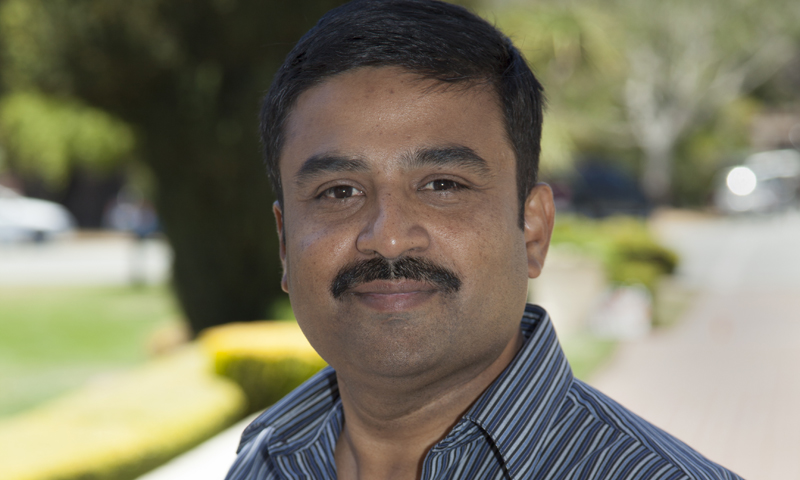 Each quarter, the Naval Postgraduate School honors a select international student for excellence in both academics and research. This past quarter, the honor, entitled the Outstanding Academic Achievement Award for International Students, went to Pakistani Air Force Wing Commander Lt. Col. Kashif Jamal (KJ) Khan, a graduate of the university’s defense analysis program.

His thesis, “Cutting the Links Between Drugs and Terrorists: Countering Major Terrorist-Financing Means,” tackles a critical topic in counterterrorism and counterinsurgency, focusing on the involvement of terrorist groups in drug trafficking as a source of income. A condensed version of the thesis has been accepted for publication in the August 2013 issue of the Combating Terrorism Exchange (CTX) quarterly journal.

As a Wing Commander and a fighter pilot in the Pakistani Air Force, Khan is one of 3,000 pilots in his country, and has flown U.S., Chinese and French aircraft. Pakistan operates 400 combat aircraft as well as various transport and training aircraft.

Khan explains that he was pleasantly surprised when he was chosen to come to NPS.

“I had only heard about NPS before coming here through some of my seniors, but I had no idea how wonderful it was going to be. The quality time with my children and spouse were quite excellent,” said Khan.

The first in his family to serve in the Pakistani military, Khan says he has a deep appreciation for what he has learned while at NPS, and holds its faculty in high regard.

“My stay here at NPS has provided me experience and an enrichment of thought, which will always be a part of my professional and personal life,” he said. “I am sure the knowledge gained here will be a personal asset and a force multiplier for my service.

“I am looking forward to applying the knowledge gained here in my future assignments,” Khan continued. “I have learned many things at NPS, and am convinced that Pakistan should benefit maximum from them. It’s all the more important given the fast changing nature of war, and the marginalization of the conventional domain of warfare,” said Khan.

Khan’s future will include opportunities to teach and mentor future Pakistan Air Force personnel, a responsibility he should excel at given the qualities recalled by his faculty during class.

“Not only was KJ the best student that I had in the decision theory/game theory course, he was always willing to help other students and add insights to the course material. It was a pleasure to meet and work with KJ,” said Dr. Frank Giordano.

Associate Professor Dr. Michael Freeman, who evaluated Khan’s thesis for the award, recalled the same qualities in Khan’s ability to connect with others. “He was clearly one of the intellectual leaders of his cohort. Several times, I heard from his classmates that they wish they could have interacted more with KJ on projects and exercises to learn more from him,” said Freeman.

Senior Lecturer George Lober added that Khan was a remarkably intelligent, humble and self-directed scholar with a contagious sense of humor. “It has been an honor and a pleasure to know him,” he added.

A 20-year veteran of the Air Force, Khan says he has been stationed at many different Pakistan Air Force bases, including Air Headquarters. Khan’s hometown is Lahore, the capital of the Pakistani province of Punjab and the second largest city in the country.