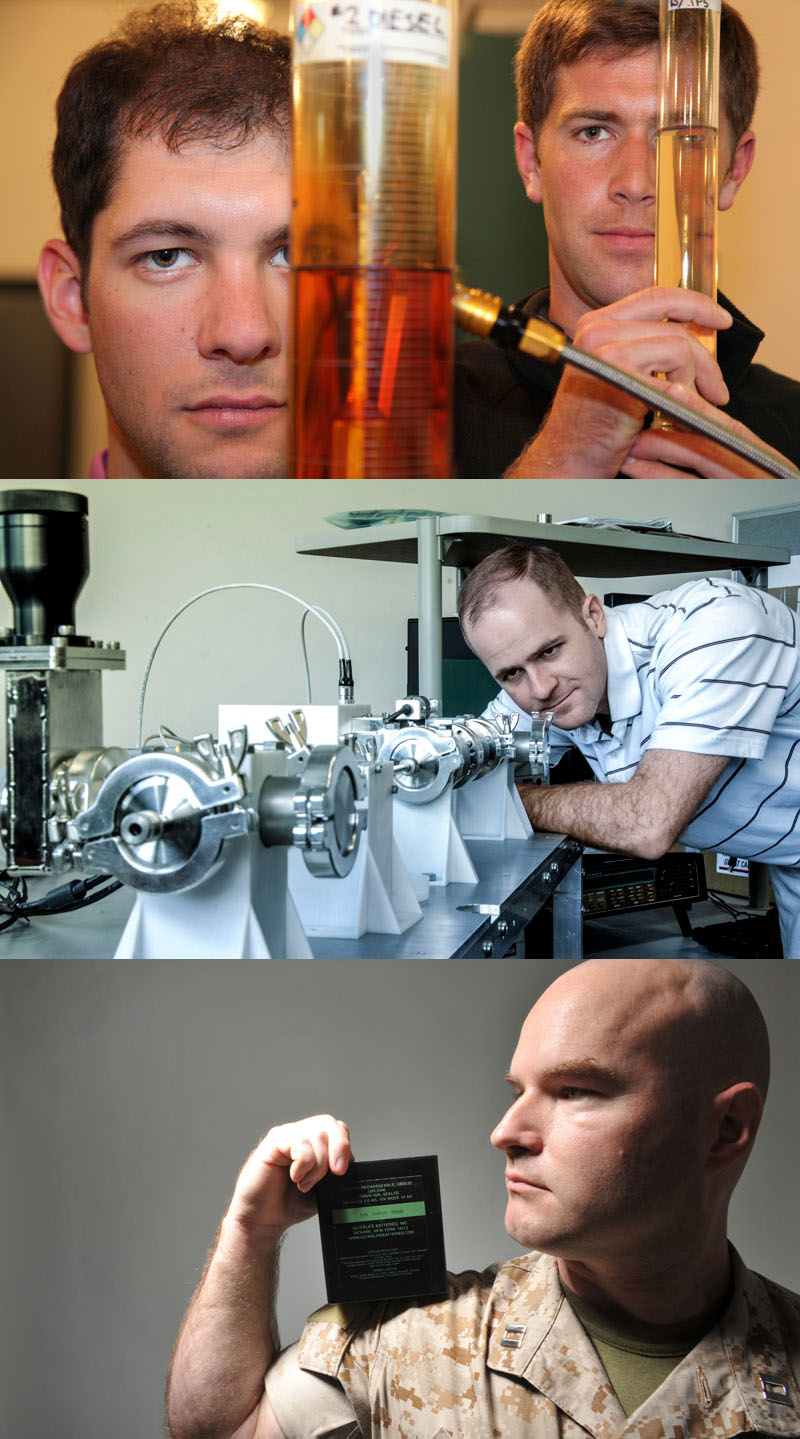 The numbers are staggering.

The U.S. Department of Defense is the single largest consumer of petroleum fuels on the planet, burning up more than $17 billion in FY11 on … gas. While aircraft are by far the thirstiest of DOD’s assets, the chain of procuring and delivering that fuel, regardless of what’s using it, is ripe for exploitation by the enemy.

It’s a tragic lesson that has been forcibly learned on the hot sands of the Middle East, where convoy after convoy, largely consisting of fuel trucks, is targeted for attack. And it is the resulting cost in lives that has truly cast a bright light on this glaring vulnerability.

A 2011 study determined that one out of every eight Soldiers wounded or killed in Iraq between 2003 and 2007 was attacked while guarding fuel’s supply chain. Similar studies in Afghanistan note that for every 40–50 resupply convoys, one Marine is going to be wounded or die. The statistics are undeniably unacceptable, and the services have vehemently claimed an end to the fossil fuel reliance of the past.

“Dependence on fossil fuels also makes the Navy vulnerable to price volatility in the global oil market. Every time the price of a barrel of oil goes up a dollar, it costs the Navy $30 million in additional fuel costs. It is one of our military’s chief vulnerabilities,” said Secretary of the Navy Ray Mabus.

“Because we pay for those increases from our Operations and Maintenance accounts, price spikes can result in less steaming, flying and training for our Sailors and Marines,” Mabus continued. “We must include alternative means of powering the fleet because energy efficiencies and alternative energy will improve combat effectiveness.”

The Navy has never shied away from attacking vulnerability through innovation and determination. When legendary Adm. Hyman G. Rickover, then a captain, led the development of naval nuclear propulsion, it was wrought with criticism from the inner defense circles of the late 1940s and ‘50s, considered too dangerous and too expensive. But the results of the Navy’s determination are undeniable, with 80 Navy vessels now powered by nuclear propulsion including every aircraft carrier since Big E, the USS Enterprise (CVN-65), was commissioned on November 25, 1961.

Mabus turned to a seasoned leader in the implementation of large-scale energy efficiency initiatives in Deputy Assistant Secretary of the Navy for Energy, Mr. Thomas Hicks, to play a lead role in developing an implementation strategy for a series of aggressive efficiency and energy independence goals.

“As we look at energy, we see it as a strategic and national security vulnerability. The energy investments we’re making both afloat and ashore are really vital to national security,” Hicks stressed. “This effort is really about increasing our combat capability, improving our mission effectiveness, and reducing our dependence on volatile fuel markets and increasingly brittle electric grids.”

Both Mabus and Hicks emphasize that their efforts are not about a single solution or technology … More so, it’s about a cultural revolution that completely changes the way their services’ view energy in every capacity — every operation, every procurement, every base, every Sailor.

View the April 2013 issue of the In Review to explore the "Power Play" info-graphic and learn more about the SECNAV's energy goals and how NPS student research and education is playing a lead role in reaching them.

“We view culture change as that untapped gold mine of efficiency, cost savings and resource efficiency that we can really take advantage of through a dedicated effort,” said Hicks.

“One of the first important steps is happening right there at the Naval Postgraduate School where you’re creating curriculum for the future leaders of the Navy and Marine Corps to become well-versed in energy security, technology, policy, and how they are all intertwined together,” he added.

“The Navy’s partnership with Naval Postgraduate School (NPS) helps prepare our future leaders to integrate energy efficiencies and alternative energy into strategy and operations, which will strengthen our energy security,” Mabus said.

The educational programs Mabus and Hicks refer to are a collection of four existing NPS degrees — operations analysis, electrical engineering, financial management and mechanical engineering — modified to include a specialized track of energy courses on top of their regular coursework. Cohorts of students have already made their way through the curricula, with the first energy students graduating this past March.

In addition, the university has also developed an energy certificate program that has been well received for students outside of the energy cohort, and an executive education program due to kick off this summer for more senior officers. And for students, faculty and staff across the entire campus, a near-weekly lecture series brings energy innovators onto campus to share their own success stories. Collectively, the components all add up to what the institution has coined the Defense Energy program.

And according to retired Navy Cmdr. Mary Sims, Associate Provost who helped develop the program, the effort provides an opportunity for officers at every level to participate in the educational process — something required for true cultural change.

“The Secretary wants to see culture change at the highest levels of the Navy,” Sims said. “There’s an ethos that travels throughout any organization that has a certain set of ideals, concepts, and priorities. SECNAV’s goal, and our goal, is that energy becomes a part of that creed.

“If we are successful in leading that culture change, then energy becomes a part of every consideration the Navy has,” she added. “It’s not something you’ll need to introduce or ensure people are doing, it simply becomes natural.”

The message is being delivered loud and clear to students in the program, who actively attend the weekly energy seminars organized by mechanical and aerospace engineering Visiting Professor Joe Farmer. Two of this past February’s key speakers are playing top leadership roles within the operational units charged with making the Navy and Marine Corps more energy independent.

Navy Energy Coordination Office Director Capt. James Goudreau, and Marine Corps Expeditionary Energy Office (E2O) Director Col. Bob “Brutus” Charette, delivered very different lectures in late February to the contingent of students in the energy program, in addition to interested faculty and students from across campus. But the core of their discussions, and their goals, are quite similar.

While Goudreau waxed intelligently on energy conservation and innovation, he was also quite emphatic that his passions for conservation were driven not by environmental or political concerns, but rather by a desire to maintain the Navy’s ability to accomplish its most critical wartime missions.

“As a military we must prevail in combat, there is no other reason we put on a uniform each day,” he said. “Energy translates into warfighting capability now and it translates in the future … We are having this discussion now, putting scarce resources into this endeavor, because we want to win the fight.”

“We’re seeding the future out here. The seeds we plant here are going to be the plants that grow in the future, and we want them to grow with energy in mind,” added Charette. “That’s why we have this thesis support program … With students here at NPS, we can get not only a great thesis product, we get the product and the person.”

The “product” Charette notes is an integral component to any graduate education program — research. Student, faculty studies into energy-related topics have flourished on campus for decades. One of the school’s more notable projects — steaming on convex hulls, a fuel-optimization planner that has achieved significant savings — was initially developed by retired Navy Capt. Jeff Kline and some of his professors while he was a operations research student at NPS in the early ‘90s.

And the same level of impact is expected to be seen in a more current project, the Replenishment at Sea Planner (RASP), that is poised to save the Navy millions by optimizing when and where ships undergo replenishment. NPS research partners at the Military Sealift Command and U.S. 5th Fleet are currently implementing RASP, and officials are expecting strong results.

Both projects, and countless in between, are indicative of a long-standing priority at the university, notes NPS Department of Operations Research (OR) Chair, Dr. Rob Dell, whose department includes the operations analysis (OA), and the OA energy variant curricula.

“In the OR department, I don’t see us doing anything dramatically different. We do have a new program of study, but are essentially revamping existing courses,” explained Dell. “The reality is, we’ve always been interested in the efficient use of resources; we’ve always had logisticians who care about that.”

Dr. Knox Millsaps, Chairman of the NPS Department of Mechanical and Aerospace Engineering, agrees that energy is fundamentally grounded within his department’s core disciplines as well.

“Energy is kind of heart and soul to mechanical engineering. In some sense, there isn’t much we needed to do to ramp up education and research in this area because we’ve been doing it all along,” he noted.

But Millsaps is quick to add that recent investments in modern functional materials science have led to a tremendous payoff in the university’s ability to support a rapidly expanding portfolio of student-driven, energy-related research. From highly-efficient, semi-solid flow cell batteries, to the evaluation of biofuels for drop-in Navy replacements, to sci-fi inspired carbon nanotubes for ion propulsion systems, the university’s cutting-edge research program in energy-related topics is very active.

And it is growing … Millsaps adds that cross-campus collaboration on several research efforts is helping bring additional projects to the institution. ESTEP, the Energy Systems Technology Evaluation Program, is a multi-year effort funded by the Office of Naval Research to evaluate alternative energy tech technologies for both operational and facility use.

Millsaps and operations research Professor Dan Nussbaum are leading the ESTEP effort, which is largely enabled by faculty collaboration. Ensuring that partnering continues, campus leaders are poised to announce the creation of the Energy Academic Group, chaired by Nussbaum, to create a consistent vehicle for campus partnerships.

“There’s a lot of relevant research going on across campus, and we want to be sure we have a good hand on what we’re exploring in total,” Nussbaum said. “I think we have an opportunity to continue expanding this program … Within the spectrum of human capital, while we’re educating the Navy and Marine Corps, we’re missing the other services from the mix.”

In the immediate, it’s the impact on the Navy and Marine Corps human capital that is most responsive to the Secretary’s cultural change challenge, and thus, is NPS’ most critical contribution.

“While I have seen a quantum change in the Navy’s prioritization of energy, what we provide to our students is awareness, tools to use, measurement techniques, and the ability to analyze,” said Millsaps. “Ultimately, our most important product will always be our students. They are the ones who are going to go out and be the leaders of the future Navy, who will manage the change. And they are what we should be most proud of.”