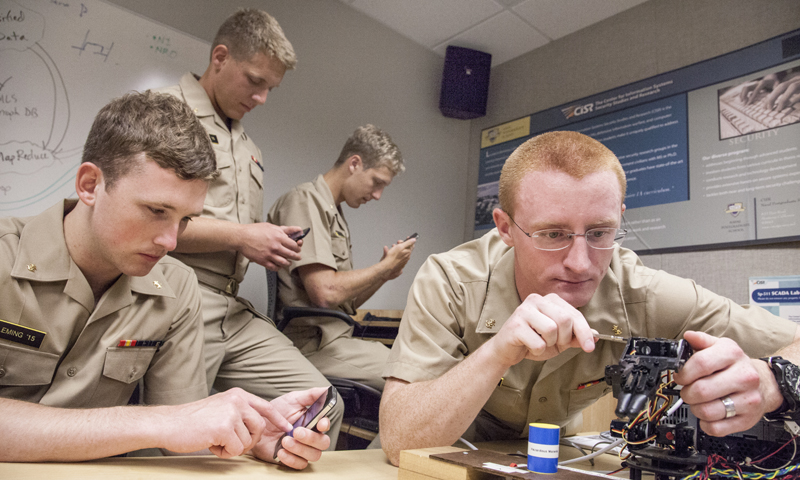 A small cadre of midshipmen from the U.S. Naval Academy in Annapolis are wrapping-up a weeks-long internship with Naval Postgraduate School Cyber Academic Group (CAG) faculty, June 18. Sponsored by the National Reconnaissance Office, the interns traveled to the West Coast during their school’s summer break to get hands-on experience in software engineering, cloud computing and computer-controlled systems.

Midshipmen Aaron Fleming, Kyle Hawkins, Ethan Genco and Victor Bowen are all computer science students at the academy, and each were assigned specific tasks to incorporate what they have already learned upon arrival in Monterey. At the same time, faculty challenged the interns to learn computer coding language and objects that deal with cyber security and smartphone application development – work they would not ordinarily be doing during their studies back in Annapolis.

“Aaron and Victor are conducting research that they normally wouldn’t be working on at the academy,” said CAG Chair Dr. Cynthia Irvine. They have been challenged, and the outcome has been a unique contribution to NPS’ research in cyber security because of their fresh sets of eyes to a problem, she added.

With Irvine’s mentorship and oversight, two of the four midshipmen are working with computer science Associate Professor Craig Martell in ongoing biometrics research, while the other two are working with research associate Thuy Nguyen on cloud computing and systems security.

Bowen, who hails from Valley Center, Calif., and the son of a Marine, has been working with a robotic arm that was part of a master's thesis project from a previous NPS student. He is using the tool to learn about Supervisory Control and Data Acquisition, or SCADA, systems.

“After getting it working and understanding it, I was sent hardware from the Naval Sea Systems Command, used on Navy ships, to begin understanding and then building up the new hardware for future thesis work,” said Bowen. Through the exercise, Bowen’s overall goal is to analyze and understand the essentials of security in SCADA systems.

Bowen noted that he is contemplating becoming an Information Warfare Officer in the Navy or to follow in his father’s footsteps and choose the Marine Corps.

Fleming, a computer science/information technology double major at the academy, is also working solo on a specific mission.

“I am working on a project relating to cloud computing which focuses on the idea of having multiple security levels of data on the same cloud,” he said. Fleming is developing a test suite to check the different capabilities of security-enhanced Linux to make sure that the multi-level security policies are being enforced.

“This will ensure that a user, and the process running at the unclassified level, cannot read data at the top secret level, and so on,” added Fleming.

From Newport Beach, Calif., Fleming says he is very interested in the cyber areas of the Navy. “ I would love to go into the field of information warfare (IW),” he said. After graduating from the Academy, he says he may choose to become a Surface Warfare Officer (SWO) and later make a lateral transfer to the IW community.

The other two interns, Hawkins and Genco, are working with Martell on the creation of Android apps using a framework called Funf.

“This framework helps app developers create apps that collect data from the built in sensors and probes on Android cell phones, such as GPS, the accelerometer, the gyroscope, etc.,” says Hawkins. “Hopefully, our apps will contribute to the research being conducted by Prof. Martel.”

Martell is quick to add that their efforts will indeed be of direct benefit to the future graduate studies of NPS students.

“The work that Ethan and Kyle are doing has a direct effect on our research. The apps they write in Funf will be directly usable by NPS students in my lab to conduct higher-level biometric-authentication experiments. At the same time, they are getting hands-on experience in both programming Android phones and in experimental design,” said Martell.

Midshipman Kyle Hawkins is from Lonetree, Colo., and Ethan Genco is from River Falls, Wis.