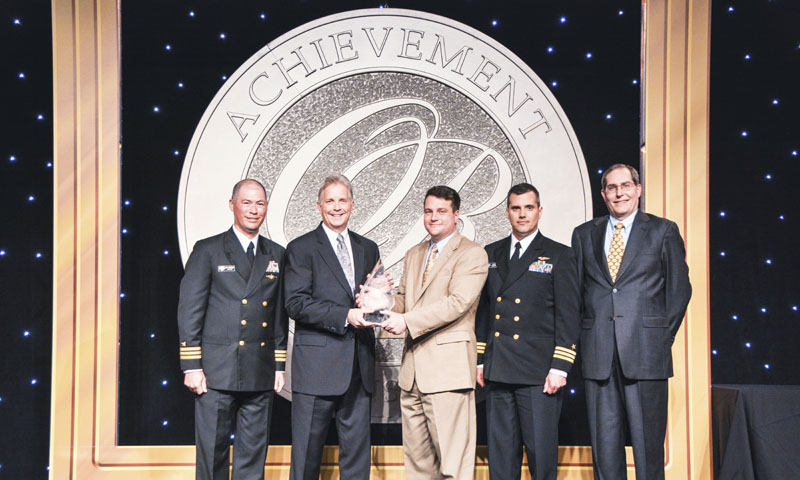 The Naval Postgraduate School’s (NPS) Department of Operations Research (OR) was awarded the 2013 UPS George D. Smith Prize by the Institute for Operations Research and the Management Sciences (INFORMS) in a nod to the first OR degree program in the United States.

The distinguished award is presented by INFORMS to an institution that demonstrates the “effective and innovative preparation of students to be good practitioners of operations research, management science or analytics.” NPS’ selection was announced at the INFORMS 2013 Franz Edelman Awards Gala on April 8 in San Antonio, Texas.

“It’s an honor to be recognized as an exceptional program. Certainly what we strive to do is produce exceptional practitioners of operations research who graduate from our program and go on to make a difference in their militaries, both in the U.S. as well as around the world,” explained NPS OR department Chairman Dr. Rob Dell. “The idea behind the prize is to ensure that the best practices for universities are acknowledged and an opportunity to share best practices provided so other programs can learn and improve.”

As part of the nomination packet, the NPS OR department highlighted some of the best practices that make the university’s program successful.  Among them, Dell noted, are the exceptional people who make up the NPS community.

“One of the things that I think really strengthens our program is our military faculty. We have a wonderful military faculty who come to us after having served a couple of tours outside, as practitioners, and they get to come back as faculty and make an impact on our students in a very direct way,” said Dell. “We also have our OR civilian faculty who obtain a significant portion of their salaries through reimbursable research. That keeps us woven into the fabric of what the DOD needs to have solved. We, the military and civilian faculty, get to bring those problems back to our classrooms.”

While the faculty are critical to the success of the program, there is a strong consensus among the OR faculty that the caliber of students who come through the program sets it apart from other academic institutions.

“By far, the students make the department. They are smart, mature, and hard-working,” said OR Assistant Professor Michael Atkinson, who has taught decision theory and computational methods at NPS. “Most of all they bring operational insight and experience that students of other institutions cannot match. Often, they are the ones proposing research topics to us based on their own experience, rather than the other way around. These connections last after graduation, with many alumni contacting us to collaborate on tackling challenges they face when they return to the fleet.”

Atkinson is just one of many within the OR department who understands the value in teaching operations research practices to men and women who already have significant leadership skills and often a background in the application of the concepts being taught. NPS OR military faculty member Cmdr. Walt DeGrange has had the dual perspective of time as both a student and faculty member at NPS. He graduated from the OR department in 2005, and returned in 2011 to teach in the department. He sees every day the fresh ideas and perspectives that the students bring to the classroom.

“One of the things that sets us apart is the leadership aspect,” said DeGrange. “That’s inherent in our students.  Other programs have to address questions of how to teach leadership … Our students have leadership skills before they get here.”

The students who enter the OR department already have an idea of some of the challenges facing the Soldiers, Sailors, Airmen and Marines around the world. This understanding often translates into applicable research through their thesis work.

“The thesis is an essential part of producing a good practitioner,” explained Dell. “It’s really about making sure that students are working on those projects that are relevant to the military. And by the nature of our students, it’s hard not to do that. They really do work on problems that are going to have an impact.”

Dell noted that the purpose of acknowledging the best practices of exemplary OR programs around the world is to help guide other universities with new or growing operations research departments. While universities can’t necessarily change the student population, which, at NPS, is largely U.S. and international military, there are other factors that can be emulated. Applied research, for example, is a cornerstone of NPS’ OR academics.

Some of the department’s research projects and assets were outlined in the department’s nomination packet for the Smith Prize. Among them is a study exploring the optimal sleep schedule for sailors at sea, a Replenishment at Sea Planner, theater ballistic missile defense, and steaming on convex hulls. Many of the department’s graduates will serve as leaders and decisions makers within their communities following graduation, making their understanding of operations research even more valuable.

“As a department, we focus on our students' operations research competency because in their line of business, lives depend on ‘getting it right’ like in no other business,” read the team’s nomination packet. “The problems they are expected to solve are not academic exercises, nor is the cost of getting it wrong restricted to just the corporate bottom line.”

The Smith Prize, now in its second year and awarded by INFORMS, is named in honor of the late Chief Executive Officer for UPS, a strong supporter of operations research. The award is intended to support the collaboration between industry and academia to further OR practices.