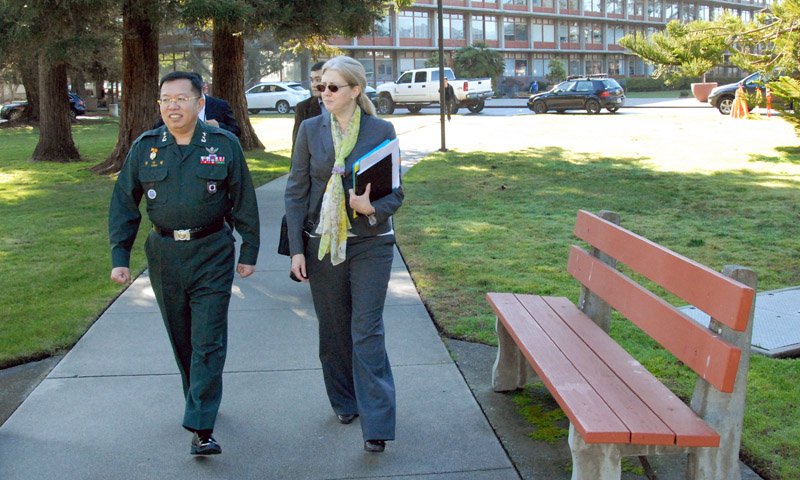 Specifically, Chun is keenly interested in a program developed by Assistant Professor Karen Guttieri that offers graduate-level certificates in civil affairs to service members from a variety of professional disciplines.

“I learned of Dr. Guttieri’s course and felt that it was important to operations on the Korean peninsula,” said Chun. “NPS is greatly respected in Korea because of the high quality of education that it provides.”

“I am excited to have a dialogue with Maj. Gen. Chun because the ROK Army has done some very important work with its provincial reconstruction teams,” said Guttieri. “There is a lot that we can learn from them.”

The ROK Army’s interest in civil affairs stems from a desire to curtail potential humanitarian pitfalls should the two Koreas eventually reunite. Chun hopes that academic work that focuses on the two Koreas will be a part of the NPS program.

ROK civil affairs programs are centered on the potential need to treat large numbers of displaced and malnourished North Korean citizens and with transitioning the North Korean government from military to civilian control.

“The U.S. government would be in support of the South Korean government should a war break out on the Korean peninsula,” said Guttieri. “We need to understand the Korean position ourselves so that we can prepare for every eventuality.”

Chun points to his native South Korea as an example of what American power can achieve when reconstruction and civil affairs are done correctly.

“South Korea is a shining example of what Americans can achieve,” said Chun. “Korea has evolved before my eyes and I attribute much of that growth to the support and protection of the American Army,” said Chun.

Chun draws a clear line between what his nation has achieved under the umbrella of American protection and what has occurred in the North under its oppressive Stalinist regime. He describes a North Korea wherein the majority are controlled by an elite few – personal freedoms are nearly non-existent and the U.S and South Korea are archenemies of progress.

“In a given year, two to three thousand North Koreans defect, half of them blend into capitalist society, the other half have a hard time,” said Chun. “Freedom can be very frightening. They know that the South Koreans live well, but they are not eager for unification because they believe that they will be enslaved by the South.”

When describing American influence in Korea and around the world, Chun offered an unusual example.

“Every American should watch the Spiderman trilogy at least nine times,” said Chun. “Spiderman teaches us that ‘with great power, comes great responsibility,’ and that once attained, power is not something easily set aside. That is a lesson that Americans should understand.”

Chun is obviously familiar with the U.S. and American culture. He is the son of a Korean diplomat and spent much of his youth in New York where his mother was posted. He speaks English without a detectable accent and, as evidenced above, his observations are riddled with references to American pop culture.

In addition to meeting with Guttieri, Chun also met with acting NPS Provost. Dr. O. Douglas Moses to discuss the progress of ROK Army students studying at NPS and to encourage ROK student participation in academics, particularly in the area of cybersecurity, in order to thwart North Korean cyber-attacks.

“The North Koreans select a hundred 14-year-old students per year and train them to be cyber warriors, even now the battle is on-going,” said Chun.

Moses noted that ROK students are deeply entrenched in NPS academics and lauded their contribution to the university. “Having Korean students in our classes enriches us, we need to hear Korean perspectives,” said Moses.

Finally, Chun met students from the ROK Army in a private luncheon where he listened to student concerns and answered questions.

“I need to go back and tell my superiors that this is the place that they must visit,” remarked Chun before saying farewell to NPS students and faculty.