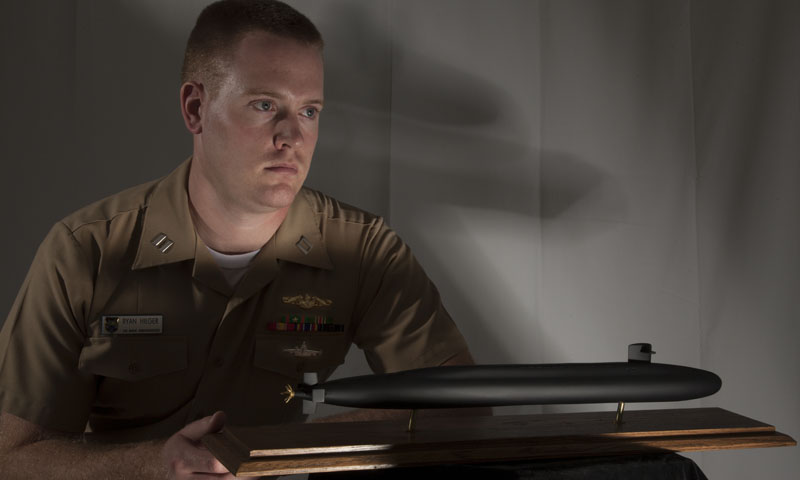 NPS Computer Science student Lt. Ryan Hilger has taken his interest in social science to the fleet, helping generate conversation around issues important to sailors – such as submarine repair procedures and time afforded for graduate education.

When Naval Postgraduate School Mechanical Engineering student Lt. Ryan Hilger sees a need for change, he turns to his background in social science to engage people in conversation around the issue. It was this passion that inspired his paper, “Spurring Innovation at the Deckplate Level in the Submarine Force,” and earned him the Naval Submarine League's Fleet Literary Award for Best Article by an Active Duty Author. It also inspired him to speak up for those officers who aren’t afforded duty time to pursue their education.

During his last sea tour, Hilger and his crew found themselves frustrated by the red tape that prevented them from repairing their own systems and getting back out to sea. Often, minor issues went unresolved until the repair could be worked into the maintenance facility's schedule.

“We had multiple problems onboard, and it’s not that we didn’t know how to fix them. We had sailors who knew exactly what the problem was,” said Hilger. “They knew how they could fix it, but they were legally unable to touch the system because it would go to the shipyard or back to the manufacturer for repair. So there was a lot of frustration. And when I got here to NPS, I finally had a chance to think about it, and think how would I solve this problem.”

He saw opportunities for the Navy to rely more on the expertise of the sailors, and allow them to first at least attempt to fix the systems that their lives often depend on. Hilger proposed necessary safeguards to ensure the systems could not be irreparably harmed by any attempts to repair them. He saw the ability to repair their own boat when possible as an opportunity for the crew to take ownership of the craft they spend so much time aboard.

“You kind of get the ability to return the ownership of the submarine to the crew,” Hilger noted. “We are the ones who have to go fight and potentially die in it. I’d rather have the boat that I have done my utmost to get ready to go to sea and do what it needs to do, than be handicapped because I can’t touch the system and now I really need it to work.”

It’s nothing new for Hilger to be involved in community dialogue beyond the campus gates. He also penned a piece for the U.S. Naval Institute’s “Proceedings” magazine, looking at the value of education for Navy leaders, and how education might play a role in helping prepare well-rounded moral and ethical leaders.

“When I say ‘education,’ I mean graduate education, joint professional military education and general Navy-specific professional education,” explained Hilger. “How do we train our officers? How do we help them develop into better leaders, managers and tacticians?”

Hilger recognizes the value of his time at NPS, and has laid out a plan to take full advantage of the academic opportunities available on campus. Since he started his studies in January of 2012, he has already completed his Joint Professional Military Education, and is earning both an Undersea Warfare (USW) Certificate and a Regional Security Studies Certificate on top of his master’s degree. With submariners making up such a small percent of the larger student population, Hilger looks forward to returning to the fleet and applying his USW knowledge in his day-to-day work, and sharing what he has learned with his crew.

“The submarine community is very focused on anti-submarine warfare,” Hilger explained. “So that involves a lot of acoustic tracking, sonar equations, signal processing, and learning about the ocean enough to recognize how to best place yourself in it to achieve your objective.

“So having this graduate understanding and underpinning makes me better able to understand the procedures and understand how I can better employ my ship to achieve what I want,” he added. “It’s the difference between knowing that shadow zones exist, and knowing why a shadow zone exists, and what I can do to get out of it if I need to. Or to be able to share what I’ve learned with a junior officer who is in qualifications.”