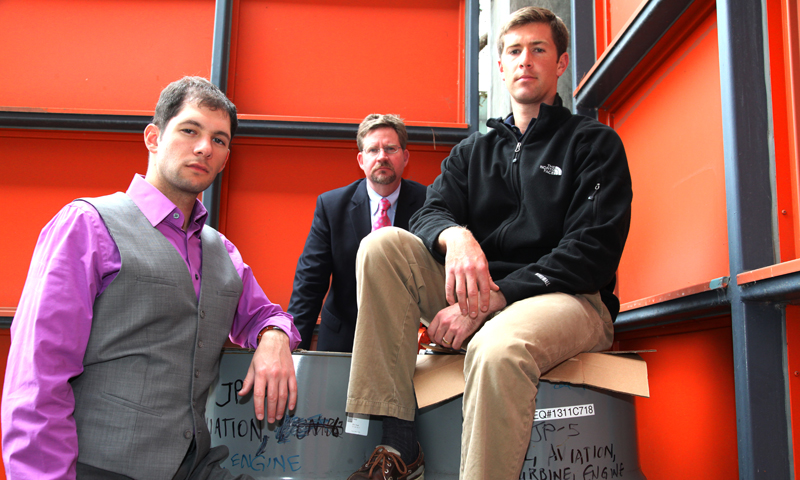 As the largest consumer of fuel in the United States, the Department of Defense has recognized the need to reduce its own dependence on foreign oil, and explore cheaper, safer alternatives. In support of those efforts, Secretary of the Navy Ray Mabus announced in 2009 a number of energy initiatives for the Navy, culminating in, among other things, a 50 percent reduction in petroleum-based fuel consumption in the fleet by 2020.

A team of researchers at the Naval Postgraduate School, in collaboration with various other research institutions – including the Office of Naval Research, the U.S. Naval Academy and the University of Wisconsin – are applying their experience in combustion to help the Navy meet Mabus’ goals.

NPS Mechanical and Aerospace Engineering (MAE) Associate Professor Dr. Christopher Brophy, and MAE Professor and Chairman Dr. Knox Millsaps, are working to help the Navy understand how alternative fuels will perform in existing gas turbine and diesel engines. The goal is to seamlessly transition to the biofuel blends without having to change any of the engines’ components.

“The Naval Postgraduate School’s part in this is really helping with certification, to give the Navy confidence through fundamental measurements that the fuels look, smell and taste the same, so to speak,” Millsaps explained. “These fuels should have the form, fit and function to serve as direct drop-in replacements. They don’t want to modify any of the systems to accommodate these fuels.

“Our research focuses on the fundamental combustion and engine-use part of the fuels, and not the production of them. Once it’s in an engine, does it physically spray the same as a regular fuel? Does it burn the same? Does it have the same emissions characteristics? We have seen that biofuels actually tend to burn cleaner,” he added. “Petroleum-based fuels have some contaminants – high sulfur, and trace metals like vanadium, for example, and gas turbine blades have thermal barrier coatings that hate vanadium. These biofuels, since they are essentially built from the ground up, don’t have as many contaminants, and in some sense, they burn a lot cleaner than conventional petroleum-based fuels.”

The NPS team is testing the combustion of the alternatives to the Navy’s current JP-5 and F-76 fuels – algae-based, hydro-reformed diesel (HRD), and camelina-based, hydro-reformed jet (HRJ) fuel blends. The 50/50 blends would incorporate half of the petroleum-based fuels currently being used, and half of either the algae or camelina fuels. The blending of the fuels will make the transition easier on the engines, and help the Navy reduce the amount of petroleum-based fuels needed to run the fleet.

“We know you can’t go 100 percent biofuel because, in aviation or ground-based systems, existing seals rely on particular ingredients found in conventional petroleum fuels which causes them to swell and provide proper sealing,” explained Brophy. “If you put them in biofuel, they tend to swell only a fraction of what is expected. Liquids contained within the engine are kept in by seals around a piston or a shaft, and if the seal is not expanding as expected, they leak. This has resulted in aircraft returning with significant leaks, so it’s a big problem. 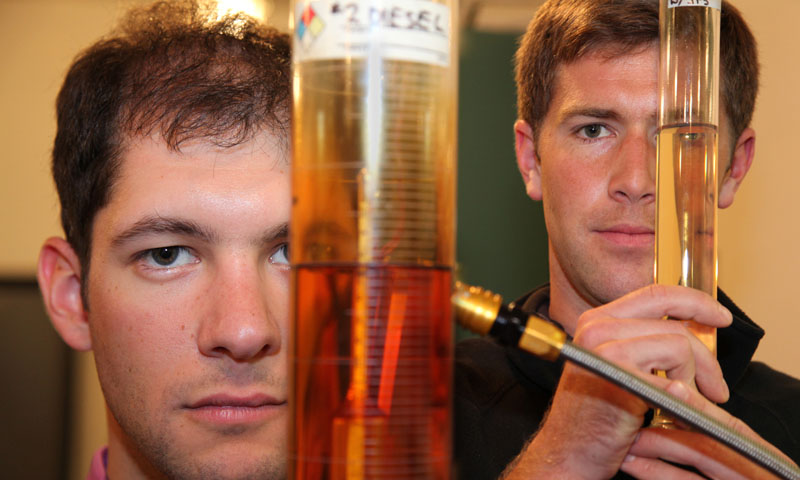 “The question was how much biofuel can the engines handle, and 50/50 worked,” he explained. “But can you do 70/30?  We don’t really know the demarcation line between what fraction of biofuel you can run, but 50/50 is what the Navy has selected to date because we know it works.”

One of the challenges with biofuels is that the scarcity of the product makes it more expensive than the fuels the Navy currently uses. To harvest algae and camelina, a member of the mustard family, in quantities large enough to fuel the fleet is a challenge, and one that has driven up the cost of production for the biofuels. For the three-day Great Green Fleet Exercise that took place during the 23rd Rim of the Pacific Exercise in July, the Navy purchased 450,000 gallons of biofuel to run the blend in two destroyers and several dozen planes for two to three days.

The cost per barrel of the biofuels led to questions on the Great Green Fleet exercise at a time when the defense department’s expenses are being scrutinized. Mabus addressed them in the Navy’s “Currents” magazine, explaining the importance of finding alternatives to fossil fuels.

“Throughout the Navy’s history, we have pioneered the way we fueled the fleet. In the 1850s, we moved from sail to coal. In the early 20th Century, we left coal to transition to oil and we led the way to nuclear power in the 1950s,” Mabus wrote. “At the time of each energy transformation, there were doubters and naysayers who said trading a known source of energy for an unknown one was too risky and too costly. But the Navy pursued innovation because it improved the capability of the fleet and made us better warfighters.

“The critics were wrong then, and they are wrong today,” he continued. “The U.S. military, time and time again, has led in the introduction of new technologies, including the Internet, Global Positioning System, and flat-screen televisions. In each case, we pursued innovation because it strengthened our national security and our capability as a military.”

Petersen is a part-time student while stationed at the nearby Point Pinos Lighthouse. The NOAA Corps, the smallest uniformed service in the country, is responsible for the operation of research ships and aircraft. Petersen was immediately drawn to biofuels as a topic for his thesis research, and sees energy independence as an important step for energy security.

“This research will not only greatly benefit the Navy but our entire nation. About 60 percent of the oil used in the U.S. is imported. The Navy values energy as a strategic resource and it is fundamental for its mission,” Petersen explained. “Supplementing our use of conventional fossil fuels with renewable fuels will significantly increase our energy independence and energy security. In addition to the tactical benefits, there are many environmental benefits that renewable fuels have over the use of fossil fuels. As an NOAA Corps officer, I am proud to be working on a project that will have a positive impact, not only on the Navy, but on our nation and the global environment overall.”

Paz will be exploring the combustion performance of bio-derived synthetic fuels in his thesis, and noted that the value of biofuels extend beyond the desire for the U.S. to be independent of foreign oil.

“As petroleum becomes less cost effective to refine into usable grades of fuel for bulk military, and ultimately governmental or even industrial use, the need for alternatives will become apparent,” said Paz. “It is not just a question of ‘energy independence’ for the United States – I think the U.S. will always require resources from non-domestic sources – it is whether the world market can be sustained by current known reserves. These bio-derived fuels will be a drop-in replacement for fossil fuels, allowing us to continue to use the same internal-combustion-centric infrastructure currently in place until something better is developed.”