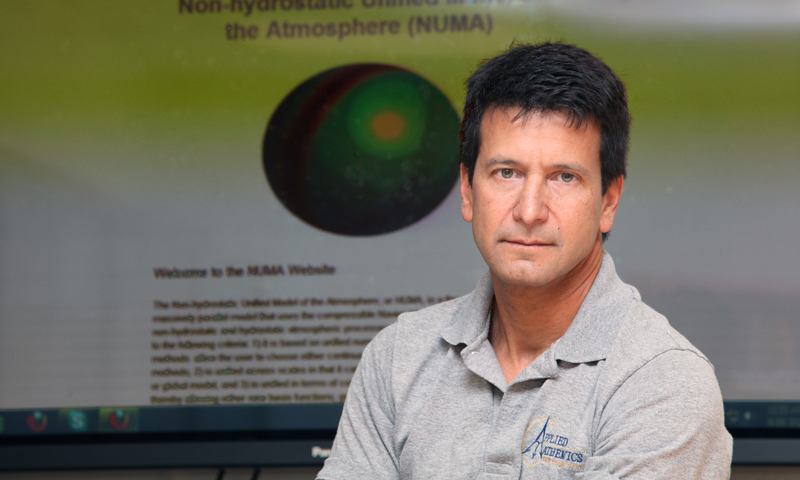 NPS Professor of Applied Mathematics Dr. Frank Giraldo has spent the last three years leading a team of researchers and students in the ground-up development of an all-new scalable, adaptive global weather prediction model, the Nonhydrostatic Unified Model of the Atmosphere, which the Navy has selected as a candidate for use as the multi-agency global model.

With a fleet constantly on the move, and a commitment to securing the world’s waterways, it’s no wonder the U.S. Navy relies on highly-accurate weather prediction models to operate safely and efficiently. For that, the Office of Naval Research has turned to NPS Applied Mathematics Professor Frank Giraldo and his team of researchers, students and interns who have worked tirelessly for the last three years to provide what could be the best possible model for weather prediction yet.

Giraldo’s hard work has paid off, as the Navy has put up his Nonhydrostatic Unified Model of the Atmosphere (NUMA) as a candidate for use as the multi-agency global model. If selected, the model would then be used by, among others, the U.S. Air Force, Department of Energy, and National Oceanic and Atmospheric Administration. The agencies clearly have stringent requirements for what the adopted model must be able to do, and the decision will likely not be made until around the time the project is slated for completion in 2020.

“I think the idea is that every agency wants to have a hand in the decision, so they all put forth a model that they think has the best chance of being adopted,” said Giraldo. “So I have to say, having our model chosen as the U.S. agency model, I think it would just be too much to ask for. I’m just happy that the Navy wants to use the model for their operations. And that’s my number one concern, to be sure that I deliver on the job that I was asked to do.”

Giraldo’s model draws on existing mathematical Galerkin methods, but uses them in an innovative way, ultimately developing a model that runs longer than current ones available – something former Chief Meteorologist and Oceanographer of Navy Rear Adm. David Titley has stated is a service priority.

As Giraldo explained, the model will aim to run “from 30 seconds to 30 days.” Traditional large-scale weather models run up to seven days on average. It’s a large order to fill, but one that Giraldo is confident in.

“Within our applied mathematicians group, we are primarily theoretical. But we also are applied enough that we are very hands-on,” said Giraldo. “And we actually develop these codes ourselves, we don’t just do theorems and let someone else build them. So the idea is that we test all of the things that we would like our model to have. We expect it to have high accuracy, to be very precise, and that it will do extremely well on current and future generation computer architectures. We test to make sure that our models really exploit these architectures fully, and we have shown that they in fact do. We have seen that they are as accurate as we believed theoretically, which is not an easy task.”

To put the model to the test, NPS has partnered with the nearby Naval Research Laboratory (NRL), where expert researchers familiar with the desired meteorological outputs examine the model in extraordinary detail.

“We have partnered with the NRL because they are meteorologists and atmospheric scientists,” Giraldo continued. “They know what the output should be. We actually give them access to our codes and they test to see things … Does it really predict the right pressure in the atmosphere? When you put in the moisture in the atmosphere, does it really rain where it’s supposed to? We don’t handle those kinds of tests here at NPS.”

Saša Gaberšek, a Meteorologist for the NRL Marine Meteorology Division, is one of the researchers ensuring Giraldo’s methods yield the desired results. He is developing test scenarios to run through the NUMA model.

“The tests are designed to highlight weather-related phenomena in nature which should be accurately depicted by NUMA,” Gaberšek explained. “I am also expanding current capabilities of NUMA by incorporating additional descriptions of physical processes that occur in nature into the model. For example, originally there were no clouds or rain in NUMA. We added a part of the code that describes how clouds are formed and, if conditions are right, how the precipitation in the form of rain is created. We then thoroughly tested the new version of NUMA by simulating an idealized squall line [a long-lived, convective storm].”

Along the way in the three-year development process thus far, there have been a number of students and NRC postdoctoral fellows involved in the research. U.S. Army Lt. Col. Joseph Lindquist, a 2010 Ph.D. graduate, now serves as the Senior Operations Research Analyst at the Center for Army Analysis. As part of his dissertation, Lindquist was involved in theoretical research for NUMA.

“My work demonstrated how to apply a special class of boundary conditions to efficiently solve some of the equations that Frank and the team used in the project,” said Lindquist. “The boundary conditions that we developed and applied had never been solved using element-based Galerkin methods – a highly accurate and efficient way to solve a set of equations that cannot be solved analytically. I had a part in quantifying the increase in accuracy of the model, using the improved numerical methods.”

Giraldo has been incredibly pleased with student participation and input, but explained that the Applied Mathematics department is still small, and always looking for others who might be interested in exploring NUMA for their thesis work. The team will be diligently working on the research for the next several years, hoping that the program will be exactly what the Navy is looking for. Anything more than that, Giraldo said, will be the icing on the cake.

“I am proud of this model because it is something I have been working on for a long time,” Giraldo said. “And when I say working on it, I mean from the ground up. In designing the mathematical principles behind the model, we use these cutting-edge techniques that we have developed here at NPS.”