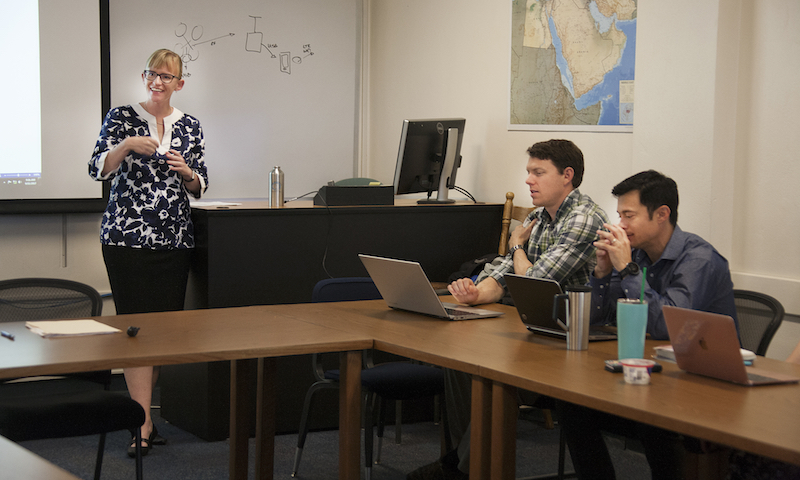 NPS Department of Defense Analysis Associate Professor Heather Gregg is the recipient of the 2017 Richard W. Hamming Annual Faculty Award for Achievement in Teaching, recognizing her exceptional work in the classroom as well as her support of NPS students through thesis supervision.

“Dr. Gregg has continually distinguished herself in the classroom since coming to NPS. She has developed several unique classes for the DA curriculum, including ‘The Rise of Religious Violence’ and ‘Culture and Influence,’ both of which are topics of importance to DA students,” wrote University Provost and Academic Dean Dr. Steven R. Lerman in a campus-wide message announcing Gregg’s selection.

“Her courses are consistently ranked among the top classes in the DA Department. Dr. Gregg has also taught numerous small, specialized seminars, including a seminar on the creation of human domain as the sixth domain of warfighting, which led to a peer-reviewed journal article written in collaboration with seven Defense Analysis students,” Lerman added.

Now in her 11th year teaching at NPS, Gregg says she is surprised and humbled by her selection.

“I am so truly honored to win this award, teaching is such a privilege at NPS,” Gregg said. “It has been so wonderful to work with all of the students over the past decade, I have learned so much from them. The classroom environment at NPS has been so dynamic. The students are tough but they are interesting, fascinating, dedicated and hard-working, and I’m just really honored to receive this award and I do this on their behalf.”

In addition to Gregg’s experience on campus, she has also traveled to several regions of conflict including Palestine and the West Bank, and the former Yugoslavia. She considers being able to reach back to her students who have redeployed just as important as having them in the classroom.

“One of the most exciting things about teaching at NPS is being able to work with officers who have returned to areas of operation like Afghanistan and Iraq, and who have the greatest of understanding of the problem and how to be more effective in the battlespace. Following their NPS education, I’ve been privileged enough to keep in touch with students over time and learn what they have been working on and how NPS has positively affected their careers as officers,” she added.

The award, named after NPS professor emeritus Dr. Richard W. Hamming, highlights one faculty member annually that demonstrates a commitment to outstanding teaching, excellence in thesis supervision, and strength of contribution to NPS students beyond the classroom. Hamming's dedication to teaching and research are well known, specifically in the mathematics, computer science and telecommunications fields of study. Hamming taught at NPS as an adjunct professor from 1976 to 1997.