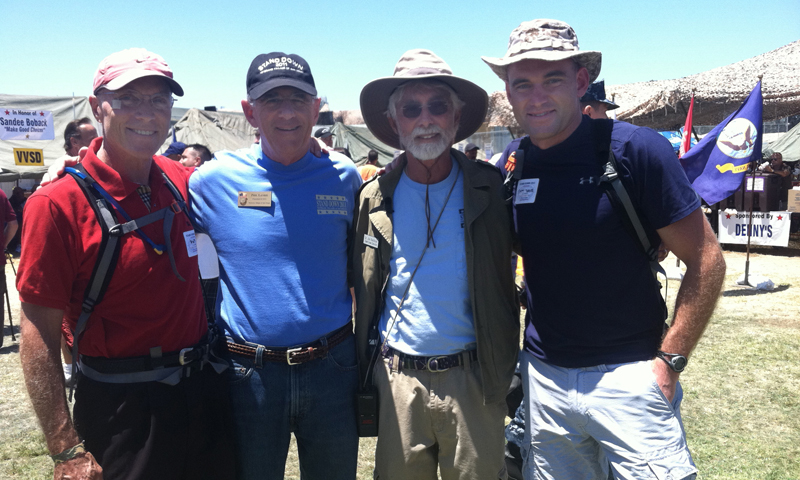 Abraham Lincoln long ago charged the nation with the duty to “care for him who shall have borne the battle, and for his widow and his orphan.” NPS Operations Research (OR) student Marine Corps Maj. David Coté has tried to do just that in his seven years of work as a volunteer with the Veteran’s Village of San Diego (VVSD), a non-profit organization dedicated to helping homeless veterans access the resources and assistance they need to get back on their feet.

Upon learning about data analysis and modeling in his OR curriculum at NPS, Coté found a way to apply his studies to the cause that had long been close to his heart. Come graduation in December, Coté’s master’s thesis research will have produced a tangible model for helping treatment providers identify homeless veterans most at risk for early exit from a treatment program.

After seeing firsthand the struggles of homeless veterans struggling with chemical dependency, Coté centered his thesis work on developing a mathematical model for predicting treatment retention and program completion for veterans participating in an addiction treatment program.

Upon checking into the VVSD for assistance, veterans are asked, among other things, if they have any chemical dependency for which they need treatment. They are also asked a series of questions outlined by the Department of Housing and Urban Development, noting demographic information such as age, combat era and mental health history.

Coté analyzed three years worth of data to develop a scoring card that he calls the Service Member Attrition Risk Tool (SMART) Card, which allows treatment providers at VVSD to score incoming veterans based on demographic factors, such as age and the number of years the individual has been homeless, to identify and interpret the risk factors of premature discharge. He hopes that such detection of high-risk veterans will allow the appropriate resources to be made available to help them succeed in treatment.

“This research study is terrific and already helping in significant ways. We can now make targeted interventions, improve treatment outcomes and reduce treatment episodes for our veterans,” said VVSD President and Chief Executive Officer Phil Landis. “With this analysis we see an improved pathway for homeless veterans; a path that leads to self-sustainable independence and a meaningful life … I wish we had this study five years ago.”

The SMART card will allow for staff to recognize during in-processing paperwork whether certain individuals may be at high risk of not completing their treatment programs. Often, those with chemical dependencies make several attempts at treatment before succeeding. For some, it’s a matter of getting a more tailored treatment plan within their first 150 days. 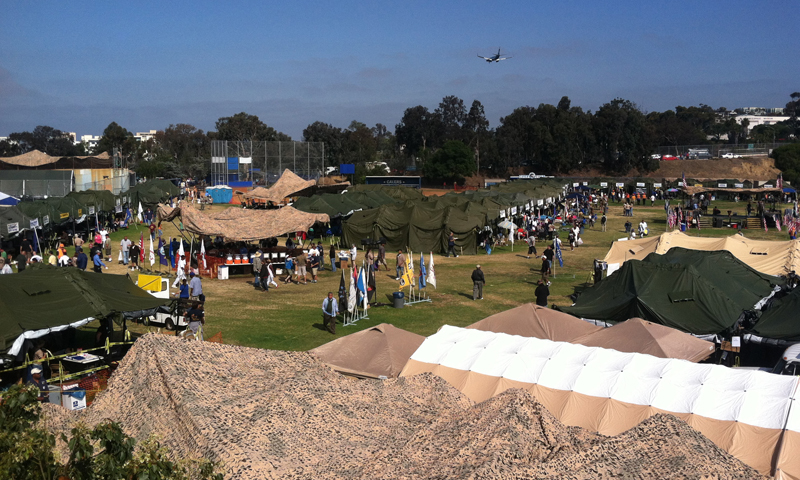 The Veterans Village Stand Down is an annual three-day ‘camp’ where homeless veterans are given food, medical attention, clothing, and assistance with finding jobs and housing.

“The treatment providers at VVSD don’t have the statistical software that I used here at NPS. They don’t have the regression analysis tools,” Coté explained. “These folks are running a non-profit organization, and doing the best they can with what they have. So what do I want to do? I’ve got to boil it down and make it a basic tool that’s easy to use.

“So I put it on a card, with simple questions. I hand out the SMART card to case providers, and they can use it with next to no training. It doesn’t require statistical software, and it reflects the probability of failure that I calculated analytically,” he added. “And here is another important finding. My scoring scheme maps to the analytical probabilities with a 99 percent correlation. It’s not perfect, but it’s pretty close.“

After seven years as a volunteer at the VVSD’s annual Stand Down event, a three-day ‘camp’ of sorts where homeless veterans are given food, medical attention, clothing, and assistance with finding jobs and housing, Coté has become personal friends with some of the veterans so desperately in need of assistance. He saw the same pride and determination in them that military service had instilled decades earlier, but many were simply in need of a little help. For Coté, the quote from Abraham Lincoln could not have been more resounding.

“Within our military, our people are our most precious asset. More important than ships, planes and rifles – we must know our veterans, know their needs and try to determine the best way to meet those needs,” said Coté. “While homeless veterans need access to secure housing, and viable employment, each veteran has his or her own unique set of circumstances that we must consider.

Coté saw his role in helping homeless veterans not only as a personal responsibility, but as a professional one as well. He saw his tour at NPS as an opportunity to use the resources available to him to help support the work being done through VVSD. Coté’s 12 years in the Marine Corps helps fuel his sense of duty to his fellow service members, a responsibility that he sees as lasting well beyond the time one leaves the service.

“On any given night there are approximately 75,000 homeless veterans on the streets,” said Coté. “I believe that effective leadership requires courage, consistency, competence, and compassion and helping homeless veterans and getting to the left of this problem is the right thing to do.”

Having been given the opportunity to study at NPS, Coté has become a strong proponent of education for military service members. He believes education has the potential to help veterans prepare for life after their service. Although the veterans that Coté encounters through his volunteer service have already been dealt a rough hand, he sees education as the way to “get to the left of the problem” and prevent future generations of veterans from ending up in similar circumstances.

“Like the tremendous educational opportunity afforded to me at NPS, I believe we should try to prepare all veterans not just for war, but also for life,” Coté explained. “They each answered the call to serve. I want to make education a mission and ensure that every veteran is prepared for life in and out of uniform.

“I believe education will help to reduce the veteran homeless numbers. Education brings dignity, security, confidence and increased opportunity. My mission as a Marine, academic and advocate is to widen the circle of opportunity for all veterans including those that are homeless.”