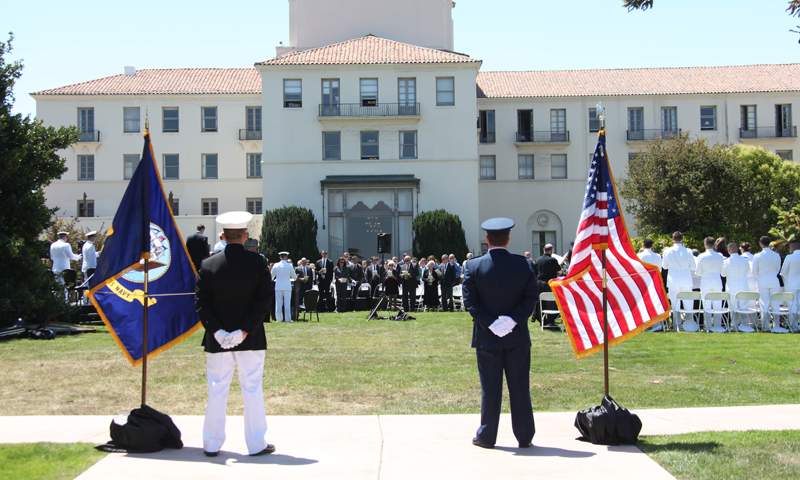 Several hundred members of the Naval Postgraduate School community joined family and close friends of Capt. Alan “Dex” Poindexter for a memorial ceremony, Aug. 10, in honor of the university’s late dean of students. An accomplished Navy pilot and veteran astronaut, Poindexter passed away in a tragic accident in Florida, July 1.

The Naval Postgraduate School community gathered on August 10 to pay their final respects to a man who committed his life to his family and country.

Several hundred people, including his family and close friends, attended the afternoon ceremony to honor the late Capt. Alan “Dex” Poindexter, the university’s dean of students and executive director of programs. Poindexter’s life was tragically cut short in an accident off the coast of Pensacola, Fla., July 1. He was 50.

Poindexter was a 1995 aeronautical engineering graduate of the Naval Postgraduate School, and enjoyed a decades-long career as a Naval pilot, and later, a NASA astronaut. He returned to NPS in 2011 to serve as the dean, a role that enabled him to serve as a mentor and leader to countless students who passed through his office daily.

As hundreds gathered on the lawn of the university’s Herrmann Hall, the memorial service opened with the presentation of colors and an invocation by Chaplain Louis Rosa, followed by readings by some of Poindexter’s close friends and colleagues. NPS President Dan Oliver spoke about the beloved dean’s exemplary character and invaluable impact on the campus community.

“Dex was a man of impeccable character and a true leader and mentor in every way imaginable. As dean of students, he was sincerely committed to the success of our students with a persistent and passionate desire to support and guide their efforts,” Oliver said. “He was comfortable talking motorcycles or hitting the bike path with a group of students one day, an then guiding a student through life’s difficult challenges one on one in his office the next.

“While Dex was tragically taken from us much too soon, he was a wonderful example of how much difference one person can make, and his absence continues profoundly to reinforce that lesson,” Oliver concluded. “Captain Alan Poindexter was, is, and always will be, a true, undeniable and very real American hero.”

Remarks were also offered by Poindexter’s lifelong friend and fellow pilot, Air National Guard Lt. Col. Lang Sias. Sias spoke about the beginning of his friendship with Poindexter, who he met during flight training in 1987. Sias described Poindexter as a man fiercely committed to his family, and one of the most dependable and capable men he had ever known. Sias thanked Lisa Poindexter for her role in helping Alan become the man who is now cherished by so many.

“Dex’s world revolved, first and foremost, around his family,” Sias recalled of his initial time spent with Poindexter. “He proudly introduced his beautiful wife Lisa, who Alan confided was not only the love of his life, but the one who years earlier had rescued him, a long-haired and rebellious Alan, from a wayward path, thus making possible all of the great things that he had achieved … Thank you Lisa for steering him in a direction where he could be part of our lives.

“Dex’s world also meant excellence in everything,” he added. “To say that those of us who served with him were his peers would be an exercise in wishful thinking.”

Following the Eulogy by Air Force Col. James P. Dutton Jr., the pilot of the STS-131 mission that Poindexter commanded, a missing man formation was flown overhead by the VX-9 Vampires, the Navy’s Air Test & Evaluation Squadron, immediately followed by a 21-Gun Salute and the sounding of “Taps.”

Poindexter will be laid in his final resting place at Arlington National Cemetery on November 13. He is survived by his wife Lisa, and his sons Zachary and Samuel.