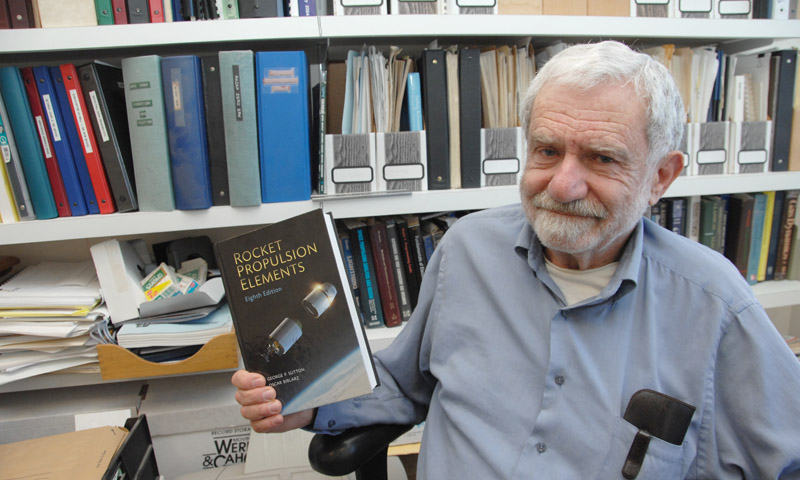 NPS Emeritus Professor Dr. Oscar Biblarz displays the "Rocket Propulsion Elements," 8th Edition, a text he co-authored with George P. Sutton, who has been publishing the work since 1949.

Emeritus Professor Dr. Oscar Biblarz of the Naval Postgraduate School’s Graduate School of Engineering and Applied Sciences has seen great things come of his book, "Rocket Propulsion Elements," 8th Edition, a text he joined in authoring with George P. Sutton, who has been publishing the work since 1949.

“Rocket Propulsion Elements" focuses on the fundamentals, essential technologies, and key design rationale of rocket propulsion, and offers a thorough introduction to basic principles of rocket propulsion for guided missiles, space flight and/or satellite flight. Since the first edition, the text has been used by over 75,000 students and professionals in nearly 37 countries, and according to the American Institute of Aeronautics and Astronautics, it is the longest living aerospace book continuously in print.

“This book appeals not only to academia, in universities, but also to industry, government labs, and rocket amateurs. It has a wide breadth of interest, and has been quite successful in all of these fields,” said Biblarz. “This book has been on the market for 60 years, but I’ve only been involved in the last two additions. I was fortunate to be asked by Dr. Sutton to collaborate on the seventh and eighth editions.”

Added Biblarz, “Its depth and breadth are completely unique, and also it’s the most up to date book on the topic – that says a few things about NPS. We’re not only users of such material, but we have that certain expertise and we are able to contribute to the scholarly body of knowledge on the subject.”

Depicted on the cover of “Rocket Propulsion Elements” is an illustration of the now famous SpaceX Dragon commercial spacecraft, and according to Biblarz, using the image of Dragon was a timely coincidence.

“Three years ago, luckily, we picked this artwork … because it had some of the detail that we wanted to show on the cover, but we didn’t know then they were going to be successful with their recent venture to the International Space Station,” noted Biblarz.

The text’s depiction of Dragon, the spacecraft that won the NASA contract to provide a commercial replacement for the cargo transport function of the Space Shuttle and recently docked with the International Space Station, is not Biblarz’ only tie to SpaceX CEO and Chief Technology Officer Elon Musk. In a June 2012 “Time” magazine article, Musk is noted as keeping a small collection of texts on rockets – “Rocket Propulsion Elements” is amongst one of those few texts ready for quick reference at his desk.

Biblarz began teaching at NPS as an assistant professor in 1968, and is a member of AIAA, the American Physical Society, and Sigma Xi.