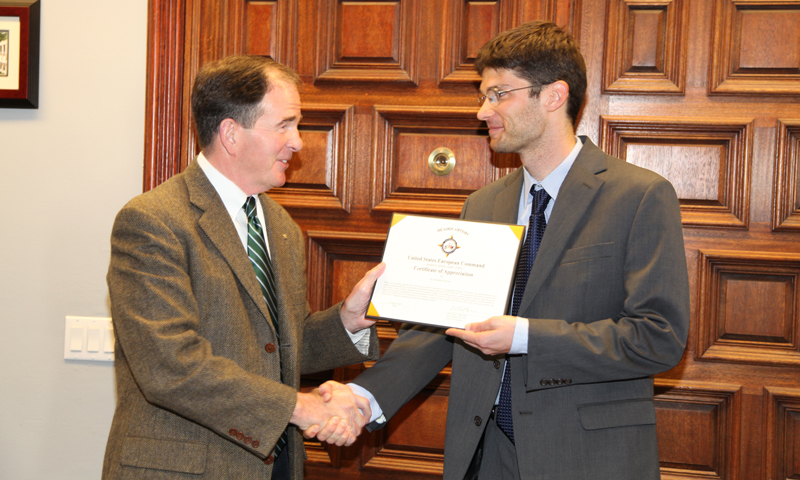 As the designated U.S. Partnership for Peace Training and Education Center (USPTC), the Naval Postgraduate School (NPS) develops programs with a focus on preventing conflict, establishing capabilities, and building capacity for the U.S. armed forces and international partners. In recognition of those efforts, Assistant Professor of Operations Research Dr. Ned Dimitrov, and recently graduated student Lt. Meredith Dozier, were both presented U.S. European Command (EUCOM) Certificates of Appreciation, June 25, for their outstanding work analyzing authorities and methods of transporting donated goods into the EUCOM area of responsibility (AOR).

Their research outlined the frequency and volume of space-available shipments within the European theatre, revealing potential means for improving goods transportation, and was instrumental in moving improvement processes forward.

NPS President Dan Oliver presented the certificate to Dimitrov, and praised his work in helping NPS fulfill its duties as the USPTC.

“We are here to honor a faculty member who has been recognized for the work he has done on a study initiated under our designation as the USPTC and in support of EUCOM's work to build friends and allies in Eastern Europe through humanitarian assistance programs,” Oliver said. “This project was the first comprehensive analysis of three DOD transport programs, their capabilities, and the operational and legal framework involved for increasing DOD's ability to ship humanitarian assistance cargo.  The EUCOM-sponsored project has had high visibility within DOD humanitarian assistance groups, and the results have been presented to more than 11 flag and general officers.”

Dimitrov’s achievements reflect the results of his first research project at NPS. Having received this assignment only two months into his term as an assistant professor, Dimitrov took full advantage of the opportunities the project presented to him. He is pleased that the success of the project will help further collaboration between NPS and EUCOM.

“It provided a great way of meeting a lot of people around DOD, not just at NPS, because I had to talk with people at EUCOM and from six different organizations around DOD,” said Dimitrov. “I got to understand a lot more about how things are structured and also a lot about the way these different groups interact with each other.  All the groups are loosely affiliated, but everyone is under their own command.

“If I was trying to do the exact same project outside of NPS, it wouldn’t have worked.  I could go to various military faculty at NPS, and they would be able to help connect me with the right people in DOD to get the data,” he continued. “My student, Meredith, spent a tremendous amount of time writing reports and getting data, and the USPTC Program Office liaison brought the project to NPS in the first place.  The NPS community provided such great support, and because of this project and the good experience EUCOM had, they are pitching more projects to the school.”

Among those projects is a study that will outline significant and major actors in the realm of disaster preparedness in the EUCOM AOR and how these actors are engaged in the region.  The study will also include recommendations for how EUCOM can fill existing gaps in the disaster preparedness cycle in the AOR.  This project is currently being completed by a team from the USPTC Program Office, in conjunction with NPS students, and with consultation provided by faculty from the Graduate School of Business and Public Policy.

Another EUCOM project currently underway includes a study that will provide recommendations on how EUCOM can encourage and facilitate NATO allies and partners to take a comprehensive approach to identifying and sourcing NATO’s future capability requirements, through initiatives such as Smart Defence and informed by access to NATO capability targets.  Currently working on this project are three Research Associate Professors of Information Science, Dr. Shelley Gallup, Dr. Ying Zhao, and Dr. Douglas MacKinnon.

Led by Associate Professor of Systems Engineering Dr. Gene Paulo, students and faculty in the systems engineering department also recently addressed two security interests for EUCOM.  According to Paulo, “One interest focused on a strategic assessment methodology that allows decision makers the means to determine how well these security interests are currently being addressed in their region.  The second provided the organizational processes and structures needed to counter trafficking of weapons, terrorists and narcotics.

“The three students involved began their research in September 2011 with a visit to EUCOM headquarters, and subsequently visited SOUTHCOM [U.S. Southern Command] as well,” Paulo added. “They also participated in a Military Operations Research Symposium on counter trafficking and interagency cooperation.  Their thesis efforts focused on the application of a systems engineering methodology and resulted in three masters level theses.

These projects, borne from the university’s Combatant Command outreach, enable NPS faculty and staff to assist EUCOM Commander Adm. James Stavridis and other Combatant Commanders in meeting their mission requirements and strategic objectives.

“Our mission here at the Naval Postgraduate School is to increase our national security through education and research; research which answers the challenging problems faced by our armed forces,” said Oliver. “With our faculty here at the school — faculty that represent a broad range of knowledge and expertise relevant to the complex issues involving national security — we are uniquely positioned to do exactly that.  But national security goes beyond the winning of conflicts once they've begun.  True security is forged in the development of friends and allies abroad, in the investments made to prevent conflicts, and, as we say in the Navy, by being a ‘global force for good.’

“NPS' designation by the State Department and recognition by NATO as the United States Partnership for Peace Training and Education Center allows us to leverage the full resources and knowledge resident at the Naval Postgraduate School towards the mission of conflict prevention by being a ‘global force for good,’” he added, “and I'm always pleased when we can support our Combatant Commands in that regard.”