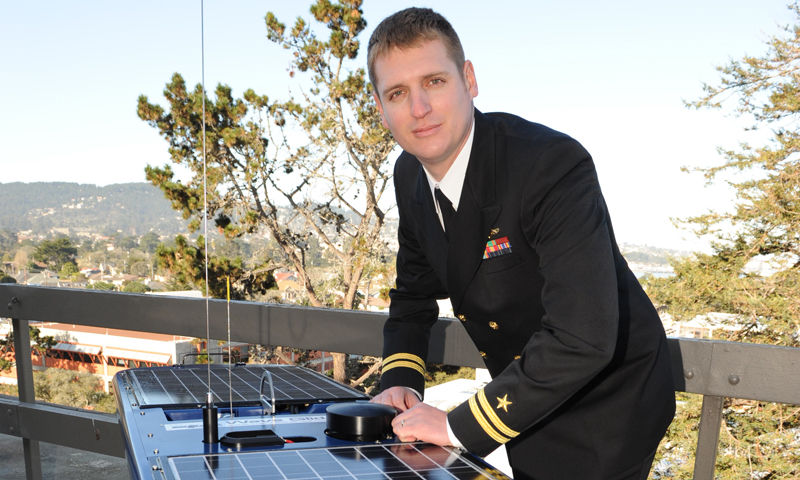 Lt. Tim Rochholz stands beside one of NPS’ two Wave Gliders, a key piece of equipment in Rochholz’s thesis research, which explores the potential of Wave Gliders to replace moored buoys in research and data collection for the U.S. Navy.

Undersea Warfare student Lt. Timothy Rochholz is exploring the research potential of a new wave-propelled unmanned surface vehicle which industry hopes can replace moored buoys for maritime surveillance. The company behind the systems, Liquid Robotics, recently deployed four units across the Pacific on an experimental data-gathering mission to Japan and Australia. Rochholz will utilize the data gathered in his thesis, tentatively titled “Wave Powered Unmanned Surface Vehicle Operation in the Open Ocean,” where he will explore the feasibility of using unmanned systems in place of the network of expensive, vulnerable moored research buoys.

The systems, called Wave Gliders, are wave propelled, and include a series of solar panels capable of powering the payload of sensors and tools for data collection. Rochholz expects to find that the gliders are well-equipped to handle long stints at sea, and copious amounts of data.

“Previous data suggests the vehicle can fulfill the role. We are just looking at a more robust data set over the whole Pacific Ocean,” explained Rochholz. “If they can replace moored buoys, they are a much cheaper alternative that can change positions and require less maintenance. Also, they add a certain clandestineness based on their ability to reposition to another area if there is a possible threat in the area. As far as research potential, just think of the cost savings if an agency could send a wave glider to an area to loiter and gather data, rather than a ship with people, fuel and supplies onboard.”

Rochholz explained how the data he is gathering from the systems deployed will be used in his thesis.  In November, four wave gliders left San Francisco Bay on what will be, according to Liquid Robotics, the longest distance covered by an unmanned ocean vehicle. The exercise is called PacX and during their nearly yearlong voyage, the Wave Gliders will transmit data that the company has made available to the public. This data is what Rochholz hopes to utilize to determine the reliability and durability of the unmanned vehicles to do jobs that had previously been reserved for manned vessels or expensive moored buoys.

“I am using the data on wave height, wind and sea state, and speed of the vehicle and course over ground to determine the exact operating characteristics,” said Rochholz. “If the vehicle can maintain course and speed over a range of sea states, then we can use it to basically do small circles around where a buoy would operate. The key is to determine the operating envelope for the vehicle and then we know where it can be deployed.”

The sensors onboard the Wave Gliders gather data on oxygen levels, water conductivity, temperature, depth, wave height and direction, air temperature, barometric pressure, wind speed and direction, and levels of chlorophyll-A and crude oil fluorescence. Wave Gliders can be fit with any number of different sensors and systems to gather various kinds of data.  The system is composed of a surfboard-size surface float, with a 7-meter long underwater tether attached to the submerged glider. The system is propelled by the motion of the waves, and can be steered remotely.

Rochholz’s thesis advisor, Dr. Tim Chung, noted that the Lieutenant’s research has potential to broaden the Navy’s use of unmanned systems – an objective outlined by Navy leadership for fiscal year 2012.

“One of the key issues with any type of naval mission is the ability to stay someplace persistently, and a lot of our focus has been predominantly in the aerial domain,” said Chung. “This is a great way to provide greater exposure for the role of unmanned surface vehicles and the types of missions that are of interest to the Navy in those domains.

“The Wave Gliders have additional capability, in terms of mobility, over moored buoys,” he added. “We would like to see them used in station keeping, but if needed, they can be relocated as a mission dictates. The other benefit is that there are a number of things you can do with this system – while it is station keeping – that a moored buoy wouldn’t necessarily be able to do. And there is definitely a desire to use systems that are solar and wave powered for longer endurance. So this is a step in the right direction.”