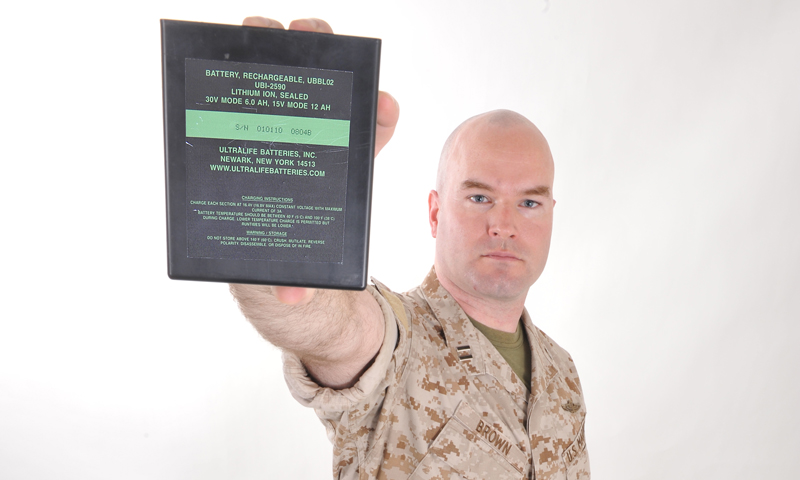 About a year ago, a Marine Corps Capt. walked into the office of Naval Postgraduate School Operations Research Professor Daniel Nussbaum claiming he had a great idea for his thesis. Capt. Darrell H. Brown would go on to describe a 2006 deployment with his battalion landing team to the Horn of Africa, and the operational constraint he felt of packing so many batteries, especially with new optics, tactical lights, cameras and various other electronics. His solution? Replace disposable batteries with rechargeable ones.

“Here we are with all of this gear that needs batteries and we are on a ship with very little embarkation space,” remarked Brown. “Why couldn’t we have a large charger where all of these batteries are stacked in racks on a stanchion and we plug it in?”

Brown set out to analyze the idea in great detail through his thesis for his master’s degree in management through NPS’ Graduate School of Business and Public Policy (GSBPP). It wasn’t a wholly new idea … In fact, a handful of previous GSBPP students had already begun studying the fully-burdened costs of batteries through their own theses. Brown wanted to continue this work, and to place a specific quantifiable cost savings on a potential change.

Brown, Nussbaum and co-advisor Professor Keenan Yoho began examining the specific battery requirements for a typical Marine Corps infantry battalion – what are the operational assets they use, how do they use them, and what are the batteries needed to support this. The team then analyzed the full costs of purchasing, delivering, using and disposing of rechargeable batteries vs. non-rechargeable through the full life cycle. In the end, when all of the numbers and costs are quantified, Brown had made quite a case to acquire rechargeable batteries along with chargers to go with them.

Nussbaum notes, “You are getting 20 to 100 batteries for the cost of one. The question is can you keep enough on hand and recharging so that there is always power available ... [This] is a concern for the infantry battalion.

“[Brown] was able to do the numbers, the modeling and write it down, and now it has to be brought up the Marine Corps chain to see if it can be implemented as policy,” Nussbaum added.

Brown’s work also discovered that the more batteries you need, and the longer a battalion is in the field, the more money could be saved – in other words, the more the battalion needed to use batteries, the faster that battalion would reach its battery cost break-even point.

When compared to non-rechargeable batteries, with the number of times that a rechargeable battery can be reused, Brown noted the recurring life cycle cost savings of purchasing, transportation and disposal costs is staggering.  He highlighted the BB-2590 battery as an example, a rechargeable replacement for the BA-5590 standard batteries used at a very high level in tactical radio communications equipment.

The 2590 battery is engineered to be re-used between 224 to 1,000 times, he noted. “But I spoke with the contractor who is running long-term life cycle studies of these batteries, constantly cycling them in various pieces of equipment, and these batteries have been used upwards of 1,200 or more times,” he added.

Brown’s analysis estimated that with these costs – and a battalion using about $14,000 in disposable batteries per day – increased investment costs in rechargeable units are recouped in about 19 days.  Any service using tactical radios can benefit every step along the resupply chain all the way to theater, without having to throw away depleted batteries and call back for new ones.

The impact on supply convoys, Brown added, is of note. It is well known that one of the significant sources of casualties in theater occurs in resupply convoys. Reports suggest that approximately one in eight convoys is attacked, and batteries alone can easily add on another vehicle to a supply convoy requiring two to four additional personnel. You can remove that entire vehicle and additional personnel, Brown said.

Brown bounced operational implementation scenarios off of subject matter experts and he was told that it might certainly work. And based upon his model, using rechargeable batteries can save an amount in the neighborhood of $15,000 per day, per infantry battalion, each using 182 batteries per day in operational scenarios.

Brown stressed that everyone uses batteries – military, DoD, as well as the general population – but when it is not seen as a significant cost driver in a budget, it tends to fall below the radar.  For any DoD entity who does use a lot of batteries, he noted, they should think about using rechargeable, as there is a tremendous push to reduce our cost of energy.

As far as next steps for the research on campus, co-advisor Nussbaum said, “Energy is hot, and batteries are just a piece of it.  The next piece needs to be institutionalizing these ideas and results as policy within the services … I am looking for thesis topics to follow on.”

Brown graduated in December 2011 after 18 months of study with a Master of Science in Management and transferred to Marine Corps Systems Command in Quantico, Va. where he says he hopes to apply some of his research.

“It’s a matter of getting the word out there more than anything,” he said.