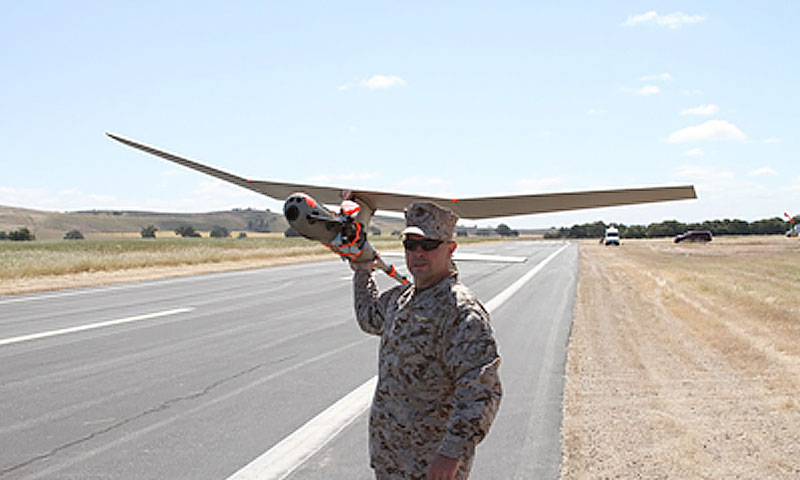 In recent years, the Department of Defense has increasingly integrated the use of Unmanned Air Systems (UAS) into a number of missions, from aerial surveillance to data collection. For men and women in theater, specially-designed UAS are lightweight, portable and capable of saving lives.

In the growing field of unmanned systems, NPS researchers continue to explore ways to maximize the efficiency and capabilities of UAS, and use them to give the warfighter a leg up over the adversary.

For Systems Engineering students, Marine Corps Captains Derek Snyder and Dino Cooper, the mission is to make a back-packable UAS a multi-dimensional tool, capable of fulfilling more than intelligence, surveillance and reconnaissance operations (ISR). Their research focuses on equipping the UAS with retrofitted, consumable kits that could assist in a variety of missions, from enemy tracking to carrying small arms to counter snipers.

“Concealment provides opportunities for adversaries to coordinate attacks,” explained Cooper. “New technologies must be utilized to improve the current ISR capabilities to ascertain combatants in unfamiliar environments. Effective systems to tag, track, locate and identify non-state adversaries must be developed and employed.”

Although both men have completed separate theses projects, they began to converge when Snyder realized that, although his intention was to develop a UAS small-arms kit, the same concept could be applied to delivering chemical tags, which paralleled Cooper’s project.

In both projects, the use of air vehicles to deliver taggants meant the warfighter can keep a safe distance from the adversary, and leave little trace of having ever been there – a component critical to many operations in theater.

“The goal is that the adversary won’t know that you’ve been there,” explained Snyder. “The airplane doesn’t touch the ground. There won’t be any footprints. You don’t want there to be any convoy activity, because whenever anyone goes out, there is a lot of activity and the adversary can see that. So, if a small, battery powered airplane delivers taggant, they really won’t know that it happened.”

Taggants can take many forms, so the delivery methods, particularly for combat scenarios, are generally not something that companies focus on during development. There, both students saw potential to adapt tools that the Armed Forces already have readily available – UAS – to deliver these taggants.

Cooper explored methods to quietly and safely deliver Perfluorocarbon Tracers (PFT) pellets, a form of taggant, from UAS. The chemical tags are odorless, colorless, and virtually undetectable without the appropriate equipment, but were light enough to be delivered by a RQ-11 Raven B. Cooper enlisted the help of his co-advisor, Mechanical and Aersopace Engineering Professor Dr. Kevin Jones, who built a prototype of the pocket delivery system to be attached to the Raven.

Once deployed, the Raven would release the payload, creating a boundary with the pellets that, if crossed, would mark an individual with the taggant, leaving little question that the person had been somewhere that they should not have been – such as setting a roadside IED or tampering with equipment. That taggant could then be detected at checkpoints or inspections using special detecting equipment. 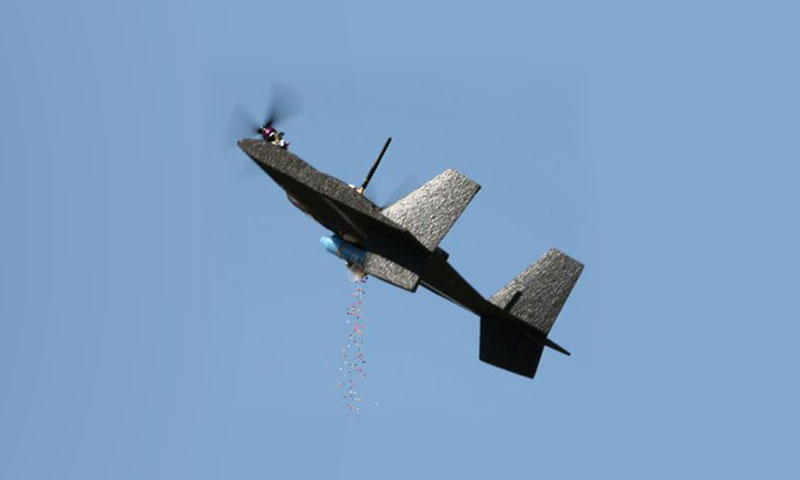 For Snyder’s thesis, testing included attaching a modified paintball gun to the UAS and testing its capabilities as a system for countering snipers. After hearing a story about a Navy SEAL who had lost two men, pinned down by enemy sniper fire, Snyder saw an opportunity for a SUAS to, at the very least, fire non-lethal rounds that would serve as a distraction to the adversary. Although his project only went as far as to deliver non-lethal force, he hopes that the lethal concept will be explored further by future students.

“Right now the smallest operational weaponized UAS is the Hunter, which is still around 2,000 lbs. and requires a protected runway for launch and recovery,” said Snyder. “No others are operational yet. So I wanted to see if there was a way to get something that had an ISR capability, the ability to be back packable, and could be affordably weaponized.”

After ironing out the logistics of getting a three-pound paintball gun down to a single pound, Snyder tested the attachment on the Quadrotor and Raven UAS. As the project progressed, he began to look at how his thesis intersected with Cooper’s.

“I think the main purpose for gaining autonomy is to have the ability to multi-task in situations where it is definitely needed,” explained Cooper. “There is always that situation where there is a convoy pinned down and you are trying to track down your adversary, which has the ability to blend right in to the environment.

“You need the ability to covertly fulfill your mission, to tag or to take out the sniper, and you need to be able to do this in such a way that you avoid collateral damage … the more collateral damage that you get, that’s more fuel for the adversary to kind of turn that against young men out there.”

One of the complexities of working with UAS is the number of restrictions placed on testing them. Because of airspace and safety regulations, they can only be tested in designated locations. Through NPS’ Field Experimentation Program, Directed by Information Sciences Professor Ray Buettner, both students were able to utilize the Tactical Network Testbed (TNT) at Camp Roberts, Calif., to test their projects in a controlled environment.

“If you didn’t have a place like Camp Roberts and TNT to go and test these things, you really are just stuck. I don’t know where else you could go,” Snyder said.

The combination of FX support and the expertise of NPS’ students and faculty helped Snyder and Cooper not only test their projects, but receive invaluable feedback on the applications of their designs.

“From the companies that develop these products, you’ve got engineers who are right out of school, never been in the military, and don’t have the experience to understand the real world applications,” explained Snyder. “And they are really begging for valuable feedback.

“We had Army operators provide feedback to us,” he continued. “I am a pilot but not a UAV guy, and these guys may not be UAV guys either, but they have been under enemy fire. So the feedback from active duty operators who have experience with things like this is huge for us.” 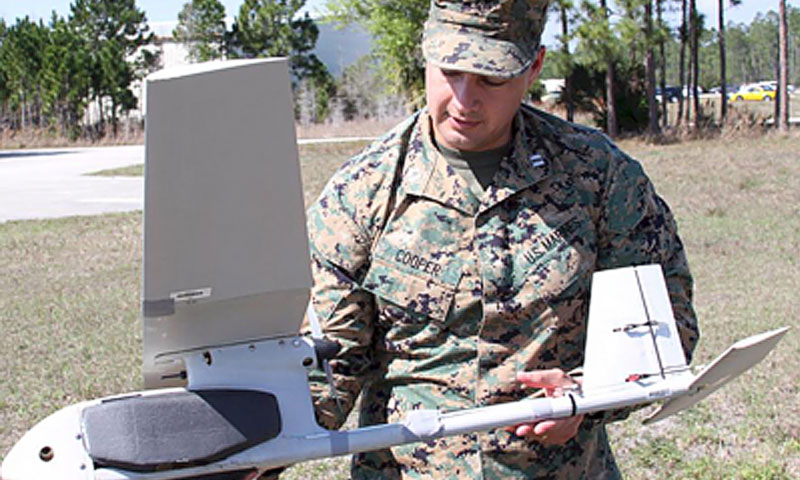 Buettner praised the efforts of both students, noting that their projects represent just a fraction of the valuable, hands-on research being done through the FX programs. Between the resources of the program and the interest of sponsors, the technologies being developed at NPS have incredible potential to make it to the battlefield and into the hands of the warfighter.

“We are very excited about their work,” explained Buettner. “Snyder and Cooper are very good examples of NPS thesis work that has immediate payoff. In terms of their individual capabilities, they will be more likely to get to the battlefield rapidly because they are at NPS and we cooperate with the U.S. Special Operations Command in evaluating and exploring new technologies. So not only is it a good idea, it’s a good idea in the right place.”

Snyder and Cooper have completed their theses and are scheduled to graduate in September. But they hope that the research on UAS will continue, giving the warfighter the option to utilize their UAS for more than just ISR capabilities.

“With the technology available to us, we have to be equally as innovative as our adversaries. They are adapting car alarms to set off IEDs,” explained Cooper. “They have the ability to look at technology in such a simple way and use it to their advantage.

“With our investments in technology, we should be able to do that on our end as well,” he continued. “We can look at what’s readily available. Rather than reinventing the wheel and developing a UAS from the ground up for a specific task, why can’t we capitalize on what we have already and make slight modifications to adapt to new situations.”