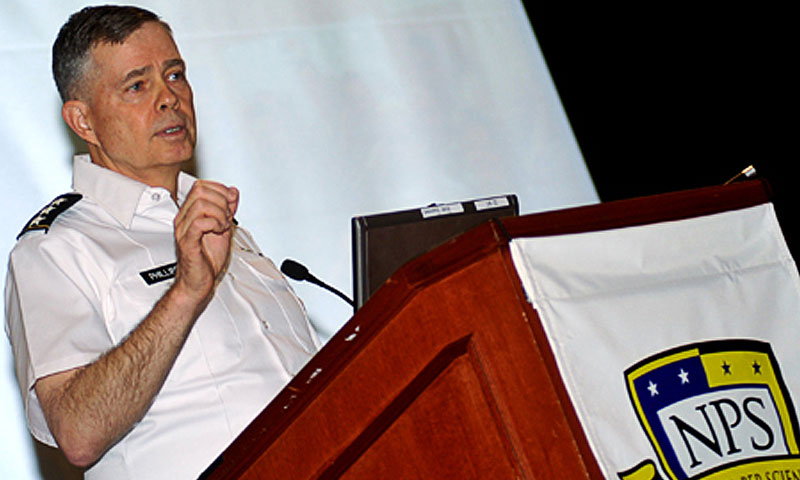 Lt. Gen. William N. Phillips offers a keynote address during the annual Acquisitions Research Symposium, outlining the Army’s acquisition needs and the importance of having qualified military and civilian DoD leaders in this critical area.

In its eighth evolution, the symposium offered 25 panel sessions over the event, highlighting a full spectrum of acquisitions-related issues from across the departments and services. Greene noted that the value of bringing together acquisition professionals is evident in the overwhelming research contributions.

“This year’s symposium showcased 70 original research papers on the Department of Defense’s (DoD) acquisition process, policies and procedures,” explained Greene. “The Acquisition Research Program is annually adding over 140 products to the acquisition body of knowledge with over 750 added since program inception. Over 60 universities and think tanks are involved in this research.

“Most importantly,” Greene continued, “it was very clear from the dialogue at this symposium that these products are not being relegated to a ‘shelfware’ status but are being actively used by policy makers to influence the continued evolution of the DoD's acquisition environment. This symposium is unique in providing a rich opportunity for meaningful dialogue among scholars, practitioners and policy makers on a diverse set of acquisition subjects that they cannot get elsewhere.”

The symposium highlighted three NPS students as panel speakers, giving them an opportunity to share their research and insight with the acquisition community.

“When we look at trying to hire people with government acquisition backgrounds, there just are not a lot of people coming out of [traditional] universities,” Gansler noted. “So the concept behind this symposium, I think, is so important. And over time, it has grown and brought much more attention to acquisitions.”

NPS President Dan Oliver also touched on the value of such gatherings, noting that these interactions between stakeholders and research can only strengthen the acquisition community and help leaders make more informed decisions – an objective that is firmly maintained in NPS’ Graduate School of Business and Public Policy (GSBPP).

“There is a lot of pressure on the defense budget,” Oliver said. “And there will continue to be a lot of scrutiny from the public as well as Congress. So it behooves us to pay a lot of attention to how we do business.

"There are so many moving parts in this broad field,” he continued. “The emphasis on research continues to be greater and greater every year, allowing us to understand better the basic principles and issues in acquisition, so we can improve on what we buy and how we buy it.”

On the second day of the event, keynote speaker Lt. Gen. William N. Phillips, Principal Military Deputy to the Assistant Secretary of the Army, offered the Army perspective on the importance of responsible spending.

He referred to a quote by former Army Chief of Staff Gen. George W. Casey, who stated, “If we are to preserve the Army that we have built so painstakingly over the last eight years, we, the civilian and military leadership of the department, must fundamentally change the way we do business.”

One key aspect of that, Phillips noted, is building up the workforce to ensure that the needs of the warfighter are being met.

Phillips recalled an example of a soldier saved from enemy fire by his Advanced Combat Helmet – the kind of product that, he noted, is acquired after going through the proper testing to determine that they are of the best possible quality.

Phillips brought the broad topic of defense acquisition down to the most critical component – the safety of the warfighter.

“[The soldier] is alive today because someone had a requirement for the Advanced Combat Helmet … and it was tested,” Phillips explained. “Our body armor is the most tested body armor in the world. And he is alive to day because the system worked.

“So if you ask me what my mission is,” he continued, “We can never take our eye off supporting soldiers, sailors, airmen, Marines or civilians who are downrange in making sure they have the tools and the capability to protect them. That’s what we do for a living.”

Set to graduate in June, they explored deployable assets for disaster response.

“By analyzing disaster characteristics and U.S. Navy platform capabilities,” their thesis stated, “we can determine which assets are better suited for mission requirements brought on by disasters."

“Knowing the best possible asset to assign to a disaster will improve the DoD’s effectiveness in regaining stability, both monetarily and logistically, within the affected region as disasters occur,” they continued. “Knowing which assets are better suited for disaster response will help the USN with future force structure and fleet composition.”The students took advantage of the platform for their research to be heard, noting that it was rewarding to present to such a diverse acquisition audience. 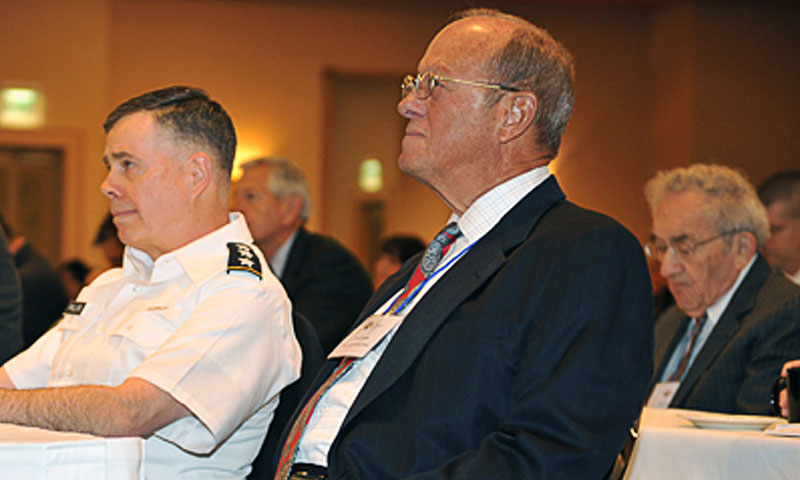 “The experience was great in the sense that we could connect with the acquisition community,” explained Ingram, “and receive a solid feel for what the future of the DoD will look like and the goals for future programs and platform implementations.”

Acquisition is a broad field – from the manpower and cost to transport goods, to the final product reaching the hands of the warfighter, the acquisition process depends on the funding available to meet the needs across DoD. Every dollar spent from the defense budget is critical and gathering the acquisition professionals from across the DoD helps ensure that the needs and expectations are aligned.

In his presentation, he looked to open a discussion about the lack of DoD funding set aside for unexpected events such as war or natural disaster.

“The United States Department of Defense (DoD) does not budget for contingencies. The DoD does not set aside funds in the expectation of war, disaster or other unexpected catastrophe, where obligation of those funds is contingent on the event actually occurring,” he explained in his thesis. “This includes budgeting ahead for possible humanitarian assistance and disaster response (HA/DR) operations.

“Stability operations are now a core U.S. military mission, and humanitarian assistance and disaster response is one of six expanded core capabilities for the Navy, Marine Corps, and Coast Guard enumerated in “A Cooperative Strategy for 21st Century Seapower.” This represents a monumental strategic shift for an establishment traditionally defined by hard power assets.”

Defense spending has been a hot button issue, with defense leaders vowing to reduce costs and eliminate unnecessary expenses. Chairman of the Joint Chiefs of Staff, Adm. Mike Mullen has said that national debt is “the biggest single threat to national security.” He and Defense Secretary Robert Gates have outlined plans to reduce the defense budget by several billion dollars over the new year, and that ultimately means more efficient spending and budgeting at all levels of the defense community.

“We all have to sharpen our pencils and make sure that every dollar we spend is spent well,” he said. “We need to be good stewards of the dollars the American taxpayers give us, and we’re going to have to do the hard work to get that right.”