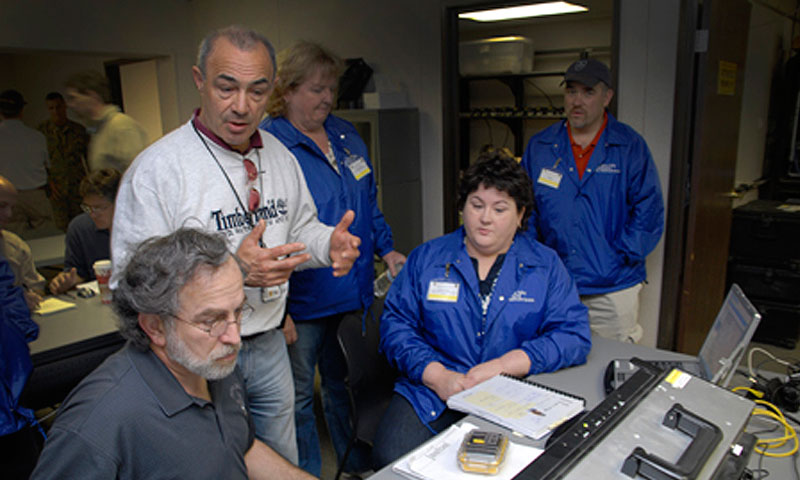 Dr. Alex Bordetsky, Naval Postgraduate School (NPS) Associate Professor, discusses technical aspects of the Battlefield Medical Experiment with NPS Research Associate Eugene Bourakov (left) and Rachel Failano (bottom right) of Salinas Valley Memorial Healthcare System (SVMHS) in the Tactical Operations Center during a recent field experiment. The experiment was testing the networking capabilities of a Battlefield Medical system that monitors a wounded soldier’s vital signs and administers medicine when directed by a doctor through the network from anywhere in the world.

With today’s advances in battlefield medicine, the survivability rate of wounded soldiers in combat has increased to favorable levels. With advanced personal protective equipment, innovative one-handed tourniquets, and quick-clotting bandages, many lives have been saved that, without those technologies, would have been lost in today’s conflicts. Yet even with those modern advances, aiding a wounded soldier in battle is one of the most difficult tasks a doctor or medical technician can do, especially if they are not able to reach their patient.

The Naval Postgraduate School (NPS) is tackling this challenge head on with innovation and ingenuity. As part of NPS’ Tactical Network Test-bed (TNT), upon the request of the Air Force Special Operations Chief Surgeon and in collaboration with Salinas Valley Memorial Healthcare System (SVMHS), tests are being conducted to develop networked-controlled, unmanned systems to assist medics in delivering medical assistance to casualties in the battlefield.

“We started battlefield medical networking experimentation upon the request from the Air Force,” said NPS Associate Professor Alex Bordetsky. “They wanted to explore how to benefit from network controlled systems to assist medics in delivering medication to a casualty site under fire or otherwise hazardous conditions.”

The idea, as explained by Bordetsky, is that future soldiers would wear a nano patch that would be attached to their body, or as part of an advanced battlesuit, that would send a soldier’s vital signals and administer medicine if he or she were injured in battle. A medic or an unmanned vehicle would get close enough to the soldier to establish a network link that would send the data to a Tactical Operations Center (TOC) where it could then be sent to any location in the world. Doctors monitoring the patient’s vitals live can make medical decision and take action by controlling the nano patch remotely.

Although this all sounds like it should be in a science fiction novel, with the NPS TNT, it is slowly becoming a reality.

In the initial phases of developing this system, Bordetsky’s team experimented with activating nano devices remotely through a network. Later they were able to use small unmanned vehicles controlled remotely by medics to deliver medicine or activate the nano devices. They are now experimenting with determining what an actual patient’s reaction to the medication delivered would be, which proves to be difficult since they cannot test on actual soldiers.

“The plan for these experiments is to try new elements on how to assist the casualty in a hostile area by means of networks and online systems,” said Bordetsky. “What we know right now is how to read information from the casualty, direct unmanned vehicles to assist by injecting and activating nano devices.”

The question, then, is what happens to the patient when the injection happens. This challenge is very critical in deciding how to proceed in administering medication, what medication to use or how much, that’s where the SVMHS has provided crucial assistance.

The SVMHS’ Experiential Learning Center focuses on hands on learning by applying practical application to classroom theory. One of their tools is an technologically-advanced manikin that accurately simulates a patient’s vital signs and reactions when hurt and treated – and it’s exactly what Bordetsky needed.

In a recent experiment at Camp Roberts, Bordetsky simulated a casualty in a remote location and established a network link to a medic on the ground then to a UAV flying over the casualty site. Finally, these readings were transmitted to the TOC then to the SVMHS manikin where it simulated the vital signs of the casualty. 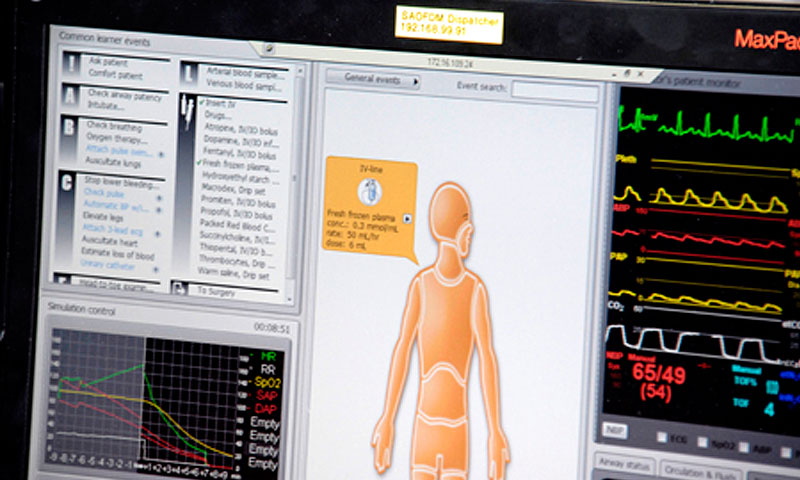 A monitor displays simulated vital signs on a manikin from the Salinas Valley Memorial Healthcare System during a Naval Postgraduate School Tactical Network Test-bed (TNT) Field Experimentation event. The manikin simulated a wounded soldier’s reaction to medication administered via a nano patch that would be incorporated in the soldier’s garments.

“The whole tread of the experimentation is under the assumption that a medic cannot get to the casualty,” said Bordetsky.

Another important aspect of this research is that it would provide the capability of locating the wounded soldier, or even multiple soldiers, in a battlefield and marking their position. A doctor could then decide, by reading their vital signs, which casualty is more critical and requires more immediate assistance.

Of course the military is not the only entity to benefit from this research. Civilian application for this system has considerable potential.

Many doctors are ‘seeing’ patients through remote systems assisted by robots with screens as faces and video cameras as eyes. Recently the New York Times published a story in which a doctor was able remotely, with the assistance of a robot, determine whether a stroke victim should be given a blood thinning medication. The doctor was able to interact with the patient asking questions and directing nurses to conduct motor skill tests as he observed. He determined the drugs were needed and the patient lived.

“I find it personally interesting as a nurse,” said Rachel Failano of SVMHS. “Even though this is being developed for military purposes, having the ability to visualize and receive information about somebody who is sick or injured is not limited to the military. That could be a hiker, or it could be in remote areas where if you couldn’t physically get to them, you could still get information and transmit it and potentially get treatment started at the site. It’s all about saving lives and preventing permanent damage or death.”