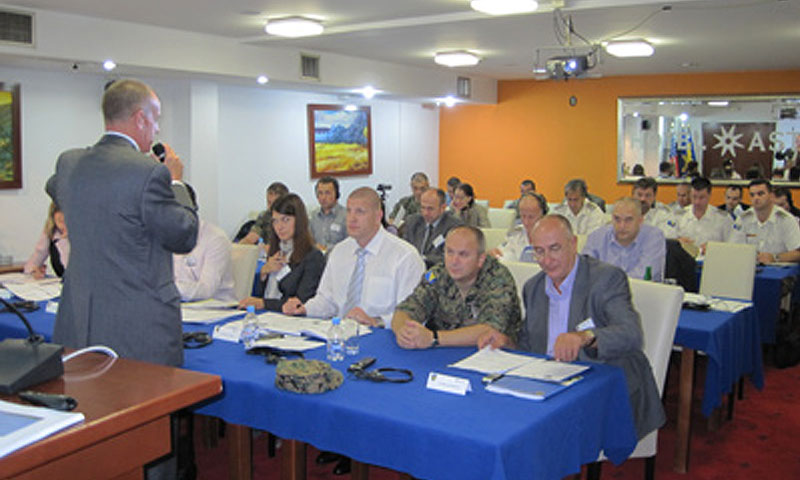 Participants from across southeastern Europe attend the Building Integrity in Defense Acquisitions workshop in Sarajevo. The workshop was developed collaboratively by NPS as the designated U.S. Partnership for Peace Training and Education Center and Bosnia and Herzegovina’s Peace Support Operations Training Center, part of the NATO Partnership for Peace program.

Faculty from the Naval Postgraduate School (NPS) traveled to Sarajevo, Bosnia and Herzegovina (BiH) this past September to conduct the workshop, “Building Integrity in Defense Acquisition,” marking the culmination of a year’s worth of collaboration among faculty at the university with the BiH Peace Support Operations Training Centre (PSOTC).

As the only U.S. designated Partnership for Peace Training and Education Center (PTC), NPS is part of a network of 16 other designated PTCs, including the PSOTC in Sarajevo. Over the past year, faculty from the two PTCs have been working together to develop curriculum in areas the PSOTC identified as critical enablers on their country’s path to NATO membership.

The area of building integrity in defense acquisition is particularly relevant in BiH as the country is looking for ways to build and strengthen its defense institutions only 15 years after the end of the country’s war, the effects of which are still felt today. During a country’s post-war reconstruction period, a fledgling institution is often susceptible to external influence and corruption, such as bribery and graft.

The workshop intended to provide participants a conceptual understanding of the fundamentals of institutional integrity in any nation, culture and agency, and to provide insight into issues linking resources to national security, such as transparency and accountability.

“We are not teaching the participants how to catch crooks, but to build systems that are resistant to corruption so they don’t have to take on criminals head-on,” said Research Associate Mark Dankel, the NPS lead on the project.

“Transitioning countries need assistance to create systems that are inherently resistant to corruption. The U.S. went through of lot of these same issues, but where the U.S. had 100 years to sort through them, these countries are expected to solve them in only a few years.”

Dankel is uniquely positioned to lead this effort with over 20 years of experience with the U.S. government identifying corruption for prosecution, most recently serving seven years as a Regional Agent in Charge with the Department of Homeland Security.

NPS faculty joining Dankel on this project include Professor Francois Melese of the Defense Resources Management Institute (DRMI) whose research expertise includes budgeting with incentives, pricing issues in revolving funds, the role of benefits and pay in compensation, defense industrial base issues, and the integration of cost and effectiveness.

Rounding out the group was Assistant Professor Timothy Hawkins also of GSBPP. As an active duty Air Force Colonel, Hawkins was able to provide participants with practical examples from his experience conducting reverse auctions, while his other areas of expertise include procurement ethics, strategic sourcing and buyer-supplier relationships.

While the participants at this workshop came from a diverse mix of organizations and different levels of experience, participants at workshops in the coming year will be grouped based on the following factors. The first workshop will be for strategic level decision-makers, such as high-level ministry of defense and parliamentary representatives, while the second workshop will be for the tactical-level operators, such as captains and majors in the armed forces.

According to Dankel, this two-pronged approach will provide the best outcome for both groups. The tactical-level workshop will be titled, “Building Integrity in Defense Deployment,” and use very specific tools, exercises and scenarios to provide participants the skills needed to contract and procure resources when they deploy in support of peacekeeping and other operations. Examples will include lessons learned by U.S. and NATO forces in Iraq and Afghanistan.

The strategic-level workshop will keep the title, “Building Integrity in Defense Acquisition,” and teach participants how they can affect systems on a policy level in order to develop training mechanisms for the tactical level. Participants will also learn how to implement systems within their existing political context, build transparency into an acquisition program, and why they would want to do so.

Given the political elections in early October, BiH is in a position to continue on its path toward NATO membership. The NPS and PSOTC collaborative effort in areas such as building integrity in defense deployment and acquisition is one way to continue the forward progress toward that goal.