From the Shuttle to the Lab, NPS Alumni Look for Solutions to Today’s Space Challenges

null From the Shuttle to the Lab, NPS Alumni Look for Solutions to Today’s Space Challenges

From the Shuttle to the Lab, NPS Alumni Look for Solutions to Today’s Space Challenges 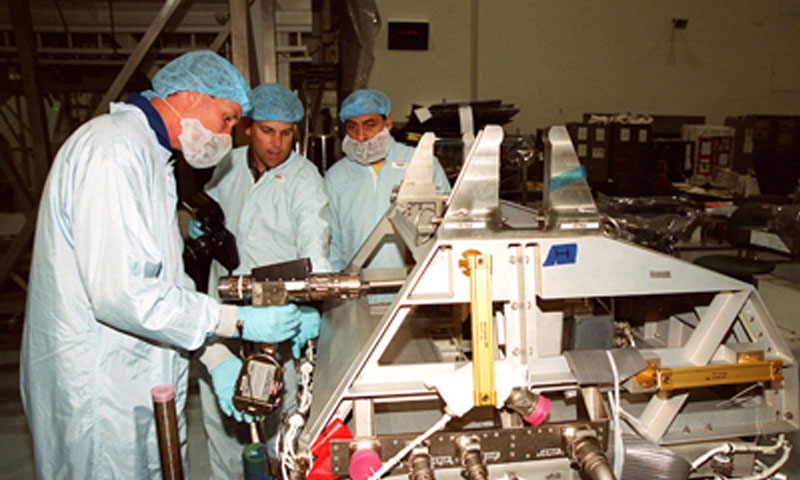 Kent Rominger, far left, works with fellow astronauts in NASA’s Space Station Processing Facility in preparation for the launch of STS-100. Rominger worked with NASA until 2006 when he took a job with ATK, where he currently serves as Vice President of Strategy and Business Development. Photo courtesy of Kent Rominger.

Naval Postgraduate School alumni and former astronauts Kent Rominger and Ken Reightler have seen time change a lot of things. The shuttle program is at its end, their days as astronauts with NASA are behind them, and they are now part of the ever-evolving commercial space industry. But the thing that hasn’t changed – the one certainty of space travel and exploration – there will always be challenges that need solutions.

“For me, the difference between having an undergraduate and a graduate education was the opportunity to see what happened when you applied state of the art technology to old problems. When I went through undergraduate engineering school, we didn’t really have handheld calculators, and we weren’t using computers extensively. So that was a big change when I started graduate school 10 or 11 years later.

“The problems hadn’t changed a whole lot, but the tools, techniques and approaches certainly had,” he continued. “I got the opportunity to apply those tools to solving all of the problems that we were trying to solve before, which allowed me to spend a lot more time thinking about what the answer meant instead of trying to get to the answer. I was able to appreciate how much more you could do when you had the computational capability in your hand.”

Reightler noted that a combination of education and Navy discipline helped prepare him for the leadership roles that would follow his time with NASA.

“It certainly helps to understand the end users’ point of view and the environment that they are operating in,” he explains. “And there is also a tremendous amount of leadership that goes back to my time in the Navy. As a manager, every day I am encountering problems and issues associated with engineering that, had I not had a very solid technical background, I would not be able to understand or make decisions about. 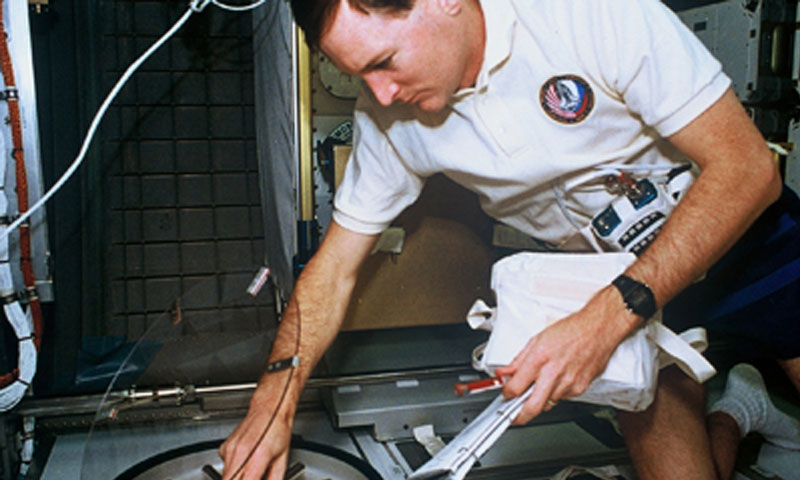 Former NPS Astronaut and retired Navy pilot Ken Reightler, shown here preparing for his duties as Commander of STS-60, now serves as Vice President of Engineering Services at ATK Aerospace Systems. He and his team work with NASA to develop new capabilities for space exploration.

“So, the combination of a solid masters level engineering education,” he continued, “the flight test background that I got at Test Pilot School, the leadership and management that I learned in the Navy, and the real world space exploration experience that I got as an astronaut, have really been a tremendous combination that allow me to do my job.”

Rominger echoed that sentiment, noting that his aspirations all began with a passion for flying and an opportunity made possible by the Navy.

“From the time I first flew with my father in a small plane at the age of 4, I knew I wanted to be a pilot,” said Rominger. “It was as a Navy F-14 fighter pilot that I set my goal on becoming an astronaut. As a young fighter pilot I learned all the NASA pilot astronauts were test pilots and that many had masters degrees in engineering fields. The Navy had a program ideally suited for me, the NPS/Test Pilot School cooperative program.

“My NPS education has been very valuable to me,” he continued. “It has allowed me to thoroughly understand many of the theories and aspects involved with being a Navy test pilot, astronaut and executive in the aerospace industry.”

Reightler and Rominger, NPS Aeronautical Engineering graduates (1984 and 1987 respectively), have maintained a presence in the space arena, always looking beyond the shuttle program they were once a part of, and into the future of space exploration. 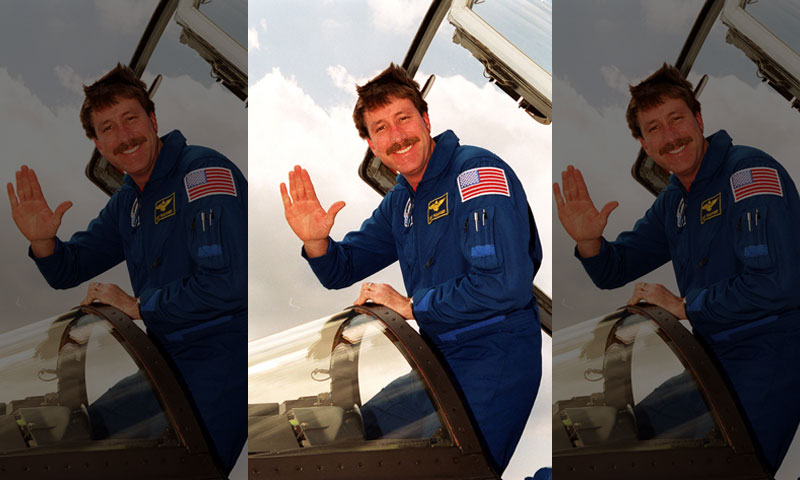 Former astronaut and retired Navy pilot Kent Rominger left NASA in 2006 to work on the development side of space systems. He and fellow NPS alum Ken Reightler apply their Aeronautical Engineering education to their duties at Alliant Techsystems (ATK).

After retiring from the pilot seat at NASA, Reightler felt a pull to the other side of the operation, where he joined Lockheed Martin in a number of leadership positions over 15 years. Rominger, however, stayed closer to the astronaut side of space, serving as Chief of NASA’s Astronaut Office until 2006. He was closely involved in the day-to-day lives of the astronauts living and working in the Shuttles and on the International Space Station.

Today, both men apply their problem solving skills at Alliant Techsystems (ATK), a Fortune 500 aerospace and defense company that works closely with the U.S. government to develop capabilities for the armed forces.

They also regularly develop technologies for NASA to help further space travel and exploration. That division of the company, called ATK Aerospace Systems, is where Reightler serves as Vice President of Engineering Services. In that capacity, he helps ensure that the systems being developed at ATK Aerospace are in alignment with the needs of NASA and the defense and intelligence communities.

“Since I left NASA, I have been intimately involved in just about every mission,” said Reightler. “Almost everything that we do is applicable, whether from the operations, engineering or science point of view. So, I am still very much immersed in it. In fact, I’ve probably been more involved since I left the Astronaut Office than when I was an astronaut. As an astronaut, I was really just focused on one aspect, whereas over the past 15 years, I have been focused on many different parts of the business.”

Rominger serves as Vice President of Strategy and Business Development, where he is involved in the development of vehicles, such as the Liberty Launch Vehicle and Heavy Lift Launch Vehicle, to launch astronauts into Low Earth Orbit, and deliver satellites and cargo to space.

With the final shuttle mission scheduled to launch in July, the former astronauts are still as connected as ever to space exploration and NASA’s vision for the future. ATK designed and developed the reusable boosters that will propel STS-135 Atlantis away from earth. The shuttle will also carry some of the equipment ATK has developed in support of NASA to test the use of the space station arm to accomplish tasks that humans might normally be required to perform.

“What we are doing now is to take the next step and look at, if you can’t get humans into space because there are no more shuttles, what could be done robotically? One of the tasks that I am working on is a robotic satellite or spacecraft servicing capability. We are going to demonstrate some of that on the final shuttle flight. They will carry up some of our equipment to demonstrate what one could do using teleoperated robots and the space station arm as a demonstrator.”