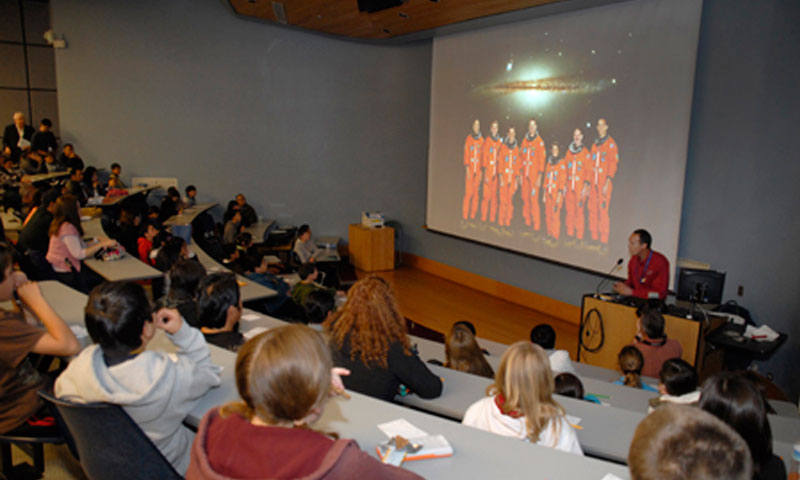 Jim Newman, NASA astronaut and Naval Postgraduate School Professor of Space Systems, thrills county students with stories of his experiences in space while also noting the importance of education and mathematics on every aspect of life.

The Naval Postgraduate School (NPS) opened its doors to hundreds of county math whizzes when the university hosted the 43rd Annual Monterey County Mathletics Competition, May 14.

Mathletics is an annual contest established to promote excellence in mathematics, and to recognize the achievements of local students and their schools. Coordinated by the Monterey County Office of Education, the event is made possible by donations and volunteers from the primary sponsoring schools, the mathematics department at California State University Monterey Bay (CSUMB) and NPS.

The contest, open to Monterey County students from grades 5-12, brought more than 350 area youth onto campus as each school’s team is allowed up to three students per test. The grand prize for the event was a $1,000 Richard Morgantini Scholarship, awarded this year to Matthew Ryan, a senior at York School for placing first among high school seniors in the advanced calculus test.

Dr. David Nickles, NPS’ Director of Research Communications and Outreach, played a lead role in bringing the event to NPS, and was already well versed in the competition.

“I’ve been a big fan of Mathletics for 12 years dating back to my days as Science/Math Coordinator for the Monterey County Office of Education,” he said. “At that time, we held Mathletics at Hartnell College and it was evident from the enthusiasm of the kids that participated back then, as well as today, that for them, math was fun!”

Nickles added that recognizing the fun in math is a primary goal of the competition, but the value in the annual event is far than just fun and games.

“Mathematics courses, especially algebra, are generally considered the gatekeepers to kids’ taking advanced science in high school, and in their later pursuit of science, engineering or technology careers while in college,” Nickles explained. “Mathletics is a comprehensive mathematics competition designed to promote excellence in math and recognize the mathematics achievements of individual students and their schools. Becoming ‘Mathletes’ encourages children … to practice mathematics – not only will they enjoy and not fear learning to abstract, but [they] will compete better in school and be acknowledged among their peers by showcasing their skill in answering challenging mathematical problems during the contest.”

This year marked the first time the competition was held at NPS, and as a special treat the school had one of its astronaut faculty members address the contestants. Jim Newman, former NASA astronaut and NPS professor of Space Systems, thrilled the young ‘mathletes’ with stories of his missions to space and the importance of mathematics in the space program.

When asked what it took to become an astronaut, Newman stressed the importance of education. “It’s not easy to get to be an astronaut,” he said. “But I worked really hard and actually built on my math, so be very proud that you’re learning math, it’s going to be very good for you in whatever you do in life.” 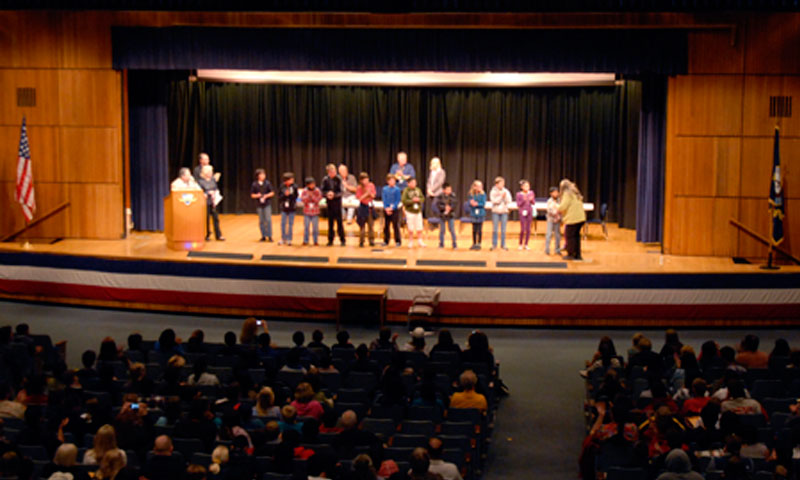 Monterey County students and participants of the 43rd Annual Monterey County Mathletics Contest are recognized during an awards ceremony in King Hall at the Naval Postgraduate School (NPS) May 14.

The focus of Newman’s presentation showcased advances in space exploration and the vastness of space. He showed an image taken by the Hubble Telescope focused on a tiny area of space and said that just in that small area they had discovered thousands of galaxies and stars. He said that there were galaxies everywhere you look in space.

The NPS astronaut then went on to test the students with a math problem of his own … If the space shuttle traveled 17,500 mph, or about 5 miles per second, how many sunsets and sunrises would the astronauts inside see in a 24-hour period? After a brief moment of calculation, a few mathletes responded correctly, 32.

After the competition, there was an awards ceremony in King Auditorium, filled by the hundreds of participants and their family members.

“It’s really a great opportunity to see all of you hear today, with the idea of math in mind,” said Dr. Philip Durkee, NPS Professor of Meteorology, and Interim Dean of the Graduate School of Engineering and Applied Sciences. “Math is such an important part of science and engineering, it is really the language of science and engineering and it is what allows us to do such amazing things in those fields.”

Durkee noted that there are many examples of NPS students moving on to achieve great things – like becoming astronauts and inventors – and he attributed a great part of those accomplishments to mathematics. He stated that math was a great part of just about anything that goes on in the world.

“Continue to work hard on your math,” concluded Durkee. “And continue to look for ways that you can use it to really do amazing things as you go through school and on to the work force as you will at some point.”

Nancy Kotowski, Monterey County superintendent of schools, hailed NPS as one of the premier institutions for science and technology in the world, and congratulated the young mathletes for their start in the field of mathematics.

“How wonderful for all of the students to be able to begin here at the Naval Postgraduate School,” said Katowski. “To begin your work for what you’re going to be in your future.”

She echoed the importance of math, stating that it was an essential skill and ability that is going to be needed for success in the 21st century.

“I know that you have interests in a wide array of areas,” said Kotowski, “But Mathematics is going to be a fundamental base for all that you’re going to do in the future.”