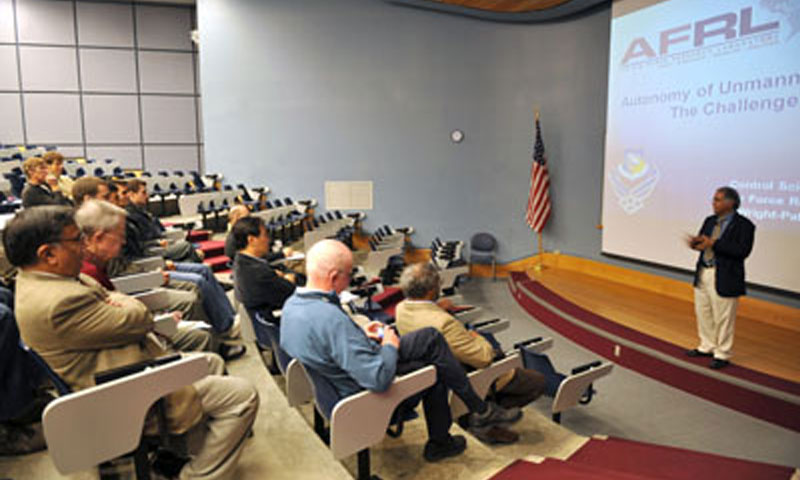 Just a week after Chief of Naval Operations Adm. Gary Roughead stressed the importance of Unmanned Aerial Vehicles (UAVs) to the future of the Navy, Dr. Siva Banda, Senior Scientist for Control Theory with the Air Force Research Laboratory (AFRL) Air Vehicles Directorate presented a lecture on the challenges of achieving UAV autonomy at the Naval Postgraduate School on Dec. 2.  The talk by the world renowned expert on autonomous and cooperative control of multiple UAVs was part of the Graduate School of Engineering and Applied Sciences (GSEAS) Distinguished Lecture Series.

“The military’s use of UAVs is escalating, predominately due to advances in technology and the nature of warfare,” said Banda, who also specializes in guidance and control of access-to-space vehicles.  “It took 12 years, from 1995 to 2007, for the Air Force to reach its first quarter million UAV flight hours, and only six months -- from May 2007 to November 2007 -- to reach the second quarter million.”

“We expected UAVs to be cheaper to operate than manned systems,” Banda explained.  “However, what we are experiencing is exactly the opposite.  It costs more and more to manage the escalating UAV flight hours, so the solution [to reducing UAV management cost] is increased autonomy.  We have to become less and less dependent on humans, to decouple UAVs from their human operators -- what we call the drive to intelligence.  To achieve this, UAVs in the future will need to be endowed with smart sensors and with tactical reasoning and decision-making capabilities. Without intelligence, which is the key enabler, we will remain tied to human operators for sensor interpretation and have limited influence.”

The Air Force, like the Navy, according to Banda, has placed the highest priority on research and development of unmanned aerial vehicles.   “In his recent ‘Report on Technological Horizons: A Vision for Air Force Science and Technology During 2010-2030,’ the Chief Scientist of the Air Force makes UAV autonomy one of the highest research and development priorities,” Banda said.

“So where are we going?” he asked rhetorically.  “The grand vision, the desired capability, is for all platforms including all manned and unmanned vehicles in all four domains -- space, air, ground and sea -- to cooperate, share information and make decisions for successful military missions.”

“The Air Force is also pushing R&D for Micro UAVs [MAVs] which can be used against targets that can’t be reached by traditional air vehicles or even larger scale UAVs,” he noted.  “Micro UAVs are unobtrusive, evasive and lethal, inexpensive but capable, able to rapidly respond, are persistent, and have insect-like maneuverability.” In fact, according to Banda, the future “fly on the wall” in contested territory might just well be a Micro UAV.

“Our main intent is to be ‘the fly on the wall’ for ISR (intelligence, surveillance and reconnaissance) observation,” Banda said. “MAVs will be used in ‘hidden in the open’ urban warfare and other complicated areas in an increasing range of dull, dirty and dangerous missions.  Sensor output from swarms of MAVs will be fused to significantly enhance battlefield awareness, including detecting explosives and WMDs, using optic flow vision techniques when GPS is unavailable.” Banda echoed the CNO’s focus on “power, power, power” as the greatest challenge for unmanned systems.

“The greatest constraint and number one challenge -- more than control -- is vehicle propulsion, finding a way to pack more and more onboard power into smaller and smaller batteries,” he noted. “With current power sources, we can only fly small UAVs for a few minutes, where we need to be able to operate them for hours.”Other key UAV challenges are sensor exploitation; navigation and control; cyber issues like jamming, encryption and information falsification by adversaries; and communications, which Banda noted is closely tied to power issues “because bandwidth and power over long  range are trade-offs.  Communications, in fact, was the biggest problem in the U.S.-Australia 2007 ‘Talisman Saber’ wargame UAV demonstration due to the small frequency range and red team jamming,” he noted.

“For MAVs, a major challenge is achieving controlled stable flight in  flapping wing models,” Banda said.  “It’s hard to make bio-mimetic MAVs that are highly maneuverable like birds and insects within the constraints of hovering, limited power and light weight.  This requires the development of highly complex algorithms and miniaturizing greater and greater onboard information processing capability.”

“By 2015, we want to be able to build bird-size mini UAVs with WMD sensing capabilities, and by 2030 -- a very ambitious goal -- to have insect-size micro UAVs with WMD sensing, tracking and targeting capabilities that can operate alone or in swarms in contested environments against intelligent adversaries.” “In the future, also, we can’t assume we’ll have air superiority,” Banda said.  “Many other countries are working on mini and micro UAVs -- both allies and adversaries.  We’ll have lots of competition.”

In response to the question whether the services have significantly different requirements for UAV and MAV research and development, Banda said that they do, “but there’s a need to standardize design specs so we can use the same tools across the spectrum.”

The Navy and Air Force, in fact, have recently taken significant steps to do just this.  To eliminate duplication of effort and achieve greater efficiencies, the two services have agreed to co-locate and provide joint maintenance, training, logistics and intelligence for their Global Hawk and Broad Area Maritime Surveillance unmanned systems.

“There are vast challenges on many fronts and we don’t know the answers yet, but the Air Force -- and the military in general -- is significantly increasing its investment in this area,” Banda concluded.  “We’re talking about a sub-field of robotics, which is a fantastic area to recruit students.  It’s a great time to be a student in UAV autonomy.” In his position as Senior Scientist for Control Theory at AFRL’s Air Vehicles Directorate, Dr. Banda performs and directs research and development activities for the Center of Excellence in Control Science. His primary responsibility is transitioning basic research results in air and space vehicle control theory to the aerospace industry.

Dr. Banda is the author or co-author of more than 180 articles and 15 technical reports and books, and has delivered more than 80 lectures worldwide.  He is a Fellow of the Air Force Research Laboratory, the American Institute of Aeronautics and Astronautics (AIAA) and the Institute of Electrical and Electronics Engineers (IEEE), serving on numerous technical, organizing and award committees of both professional societies.  He is the recipient of many prestigious honors, including the AIAA Best Paper Award, the IEEE Control Systems Technology Award, the Royal Aeronautical Society Silver Medal, the Meritorious Presidential Rank Award, and the Distinguished Presidential Award.

In addition to being a Fellow of the AIAA and IEEE, Dr. Banda is a member of the National Academy of Engineering; served on the Board of Governors of the IEEE Control Systems Society, and on the Editorial Board of the International Journal of Robust and Nonlinear Control.  He is former associate editor of the Journal of Guidance, Control and Dynamics; was General Chairman of the AIAA Guidance, Navigation and Control Conference; served on the Board of Visitors of the Office of Naval Research and on the Peer Review Boards of the NASA Langley Research Center and the Army Research Office; and is a member of the NATO Research and Technology Organization Technical Committee.

Dr. Banda has served as adjunct professor and thesis adviser at the Air Force Institute of Technology, Wright State University, and the University of Dayton, in Ohio.  He is a technical adviser to the Air Force Office of Scientific Research, the Defense Advanced Research Projects Agency, the Office of Naval Research, the National Aeronautics and Space Administration, the National Research Council, and several leading academic institutions in both the U.S. and abroad.