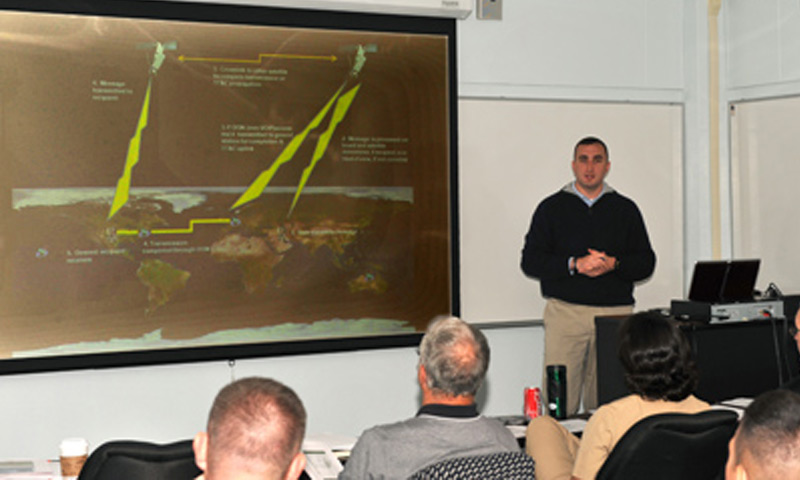 Marine Capt. Andrew Carcich explains his group’s design for a Low Earth Orbit (LEO) satellite during the Spacecraft Systems II Course midterm review. A panel of visitors and Space Systems Academic Group (SSAG) professors offered their advice to the two presenting groups, bringing together a comprehensive understanding of space capability needs of the DoD. The students, under the direction of Professor Al Scott, are part of the SSAG’s Space Systems Operations program.

Students in the Space Systems Academic Group (SSAG) had a unique opportunity during their Spacecraft Systems II Course (AE4831) midterm review when the Navy’s Program Executive Officer for Space Systems, Rear Admiral Liz Young returned to her alma mater. Young took the time from a day of briefings and meetings to attend the review, asking questions and providing feedback on the two group presentations.

“The fact that she would take the time out of her busy schedule to participate shows the students how important she regards their education at NPS for the future of the Navy’s space cadre,” explained SSAG Senior Lecturer and retired Navy Capt. Al Scott.

In addition to serving as PEO, Space Systems, Young is the Director of Systems Engineering at the National Reconnaissance Office and Commander of Space and Naval Warfare System Command’s (SPAWAR) Space Field Activity. She received her dual Master's of Science degrees in Physics and Space Systems Operations (SSO) from NPS in 1990.

In her current role, Young oversees the acquisition, production, development and testing of the Navy’s space capabilities. As an alum of the same program as the student presenters, she understands the demand that such a rigorous program can have on the officers. She, better than most, also understands why space systems capabilities are so critical to the DoD’s mission.

“The Navy has a global mission with a need for assured access to information wherever they operate. That’s why Space Systems are important to the Navy,” explained Young. “Satellites also give you access to denied territory. UAVs and high altitude aircraft can’t fly over a sovereign nation without repercussions. Satellites are accepted by the global community and give you access to denied territory anywhere in the world, anytime you want.”

Along with SSAG Chair Rudy Panholzer, Professor Hersch Loomis, Professor Charlie Racoosin, Professor Sherif Michael, Professor John Phillips and Cmdr. Allen Blocker, Young sat in as an evaluator for the presentations, giving the groups tips to consider as they move further into their research process. The feedback was positive and gave the students a chance to elaborate on areas of interest or concern to the audience.

“Professor Scott has been our primary instructor,” said Medium Earth Orbit (MEO) group leader Army Maj. Josh Nagtzaan. “Everyone else who attended offered an outside look at what we have done. It’s valuable to get that kind of honest feedback on our work. And since everyone had a different area of expertise, we received feedback from different angles.”

Scott, PEO Space Systems Chair Professor at NPS, teaches the class and noted that having feedback from leaders like Young only enhances the learning experience for the young officers.

“Participation from a flag-level officer such as Rear Adm. Young provides tremendous benefits for the students in our space systems program,” said Scott. “As an expert in space systems acquisition and operations, the insight and feedback she can provide helps them better understand the challenges associated with designing space systems to provide support to the warfighter.”

Seeing firsthand what the Navy expects from their space systems will help students as they delve into the design and development processes. The group presentations represented the culmination of two quarters spent investigating satellite design. The second course incorporated the design components, formulas, and problem solving of Spacecraft Systems I (AE4830) while adding the group design project of a spacecraft to apply the processes the students learned. The feedback from the panel of guests allowed the students to examine aspects of their project that they may have overlooked, or delve deeper into questions that might affect their end result.

“It’s always good to have someone like Admiral Young here,” explained Lower Earth Orbit (LEO) group leader, Marine Capt. Andrew Carcich. “She provides an outside perspective and doesn’t really know what we have been taught. And as someone that we might end up working for down the road, it’s good to get her feedback.”