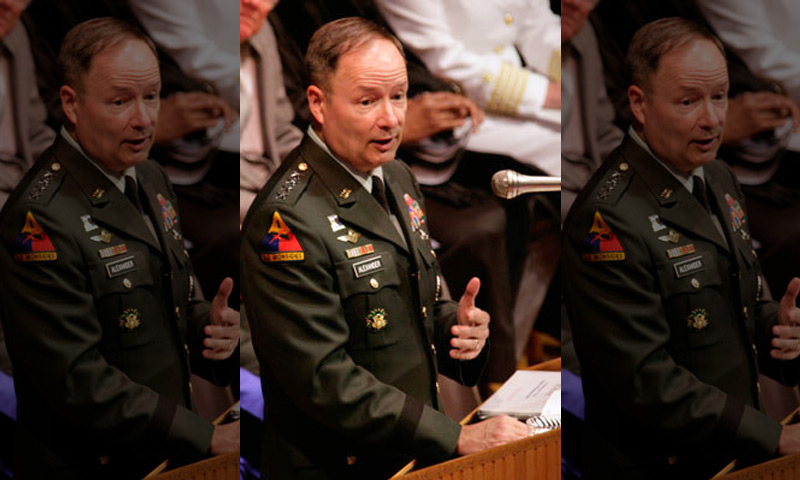 Director of the National Security Agency/Chief, Central Security Service and Commander, U.S. Cyber Command Army Gen. Keith B. Alexander addresses the Summer 2010 graduating class in King Auditorium, Sept. 24. Alexander is a dual degree graduate of NPS, and was awarded the Distinguished Alumnus Award during his visit.

President Dan Oliver kicked off the ceremony by introducing Alexander, who holds dual master of science degrees from NPS in Physics and Systems Technology/Electronic Warfare.

“This graduating class represents our best leaders and our brightest minds,” Alexander told the assembled graduates. “We know this when we look at the list of alumni of this institution that includes the Chairman of the Joint Chiefs of Staff Admiral Mike Mullen, heads of state such as King Abdullah of Jordan, Secretaries of the Army and Air Force, the Commandant of the Marine Corps, and foreign defense secretaries. You are in that class of people – the visionaries we seek to be the front line leaders.

“Many of you are graduating with advanced technical degrees, and technologists have always driven the evolution of warfare and been leaders in shaping the way we fight,” Alexander said. “Today as before, technologists are on the front lines, and technically adept and trained people are the key to our success in cyberspace. In the 20th century, being a ‘superpower’ was defined by the ability to build and test nuclear weapons,” Alexander noted. “In the new 21st century, as more and more of our nation’s treasure is stored in cyberspace, real power lies in the ability to protect and defend cyberspace. You can’t be a superpower unless you can effectively defend your networks against all adversaries.”

Alexander emphasized that “technical competence will be as fundamental for our future military leaders as traditional military strategic and tactical skills” and challenged the graduates to do four things to ensure success: “Whatever you do, do it with passion. Embrace your vision and take educated, professional gambles routinely and often. And while you’re gambling intelligently, live on the edge – the cutting edge – anticipating and even developing the ‘next big thing.’ Those who have lived on the cutting edge have changed the course of warfare – and our history.”

“For anyone thinking about coming to NPS, I’d say ‘Do it, absolutely – in a heartbeat,’” said Harley, who briefed Gen. Alexander in the afternoon on promoting NPS as a Center for Cyber Excellence. “The Naval Postgraduate School is a fantastic experience. In addition to world-class faculty providing a world-class education, a unique aspect of the NPS experience is the opportunity to collaborate with research sponsors to solve real-world military challenges that can have a significant impact on current operations. The knowledge I’ve gained during my time here is directly applicable to my follow-on assignment, and I look forward to making a positive impact at the Navy Information Operations Command.” 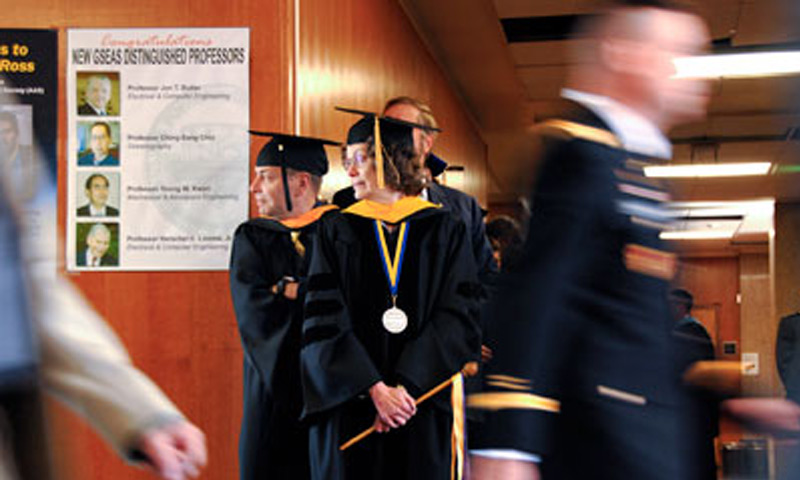 “I knew General Alexander was going to be recognized as a Distinguished Alumnus, but this came as a complete surprise,” Tighe said. “I’m very honored and proud to be an NPS alum. It’s a wonderful institution whose faculty and staff are top notch.”

Select students and faculty were recognized for outstanding achievement in academics, instruction, research and community service at a pre-graduation awards ceremony, Sept. 14.

“I’m deeply honored to be selected for the Hamming Award for Teaching,” said Rendon, who served for over 20 years as an acquisition contracting officer for the Air Force before coming to NPS. “This is indeed a special award for me, because it reflects Dr. Richard Hamming’s teaching values, which I also share. One of those values is a passion for our students and their learning. Student mastery of the course material in the classroom is important, but what is also important and valuable is the knowledge gained outside the classroom – through thesis research and independent studies.”

A first for NPS graduation receptions was excited Chiweenie “Kimba” – a four-legged “extended family member” belonging to the sister of Distance Learning Systems Engineering master’s graduate and Defense Manpower Data Center software engineer Anthony Nguyen. “The Naval Postgraduate School has a lot of prestigious professors who really care a lot about our education,” Nguyen said. “Whether you’re a resident student or distance learning, the faculty go out of their way to give you full access.”