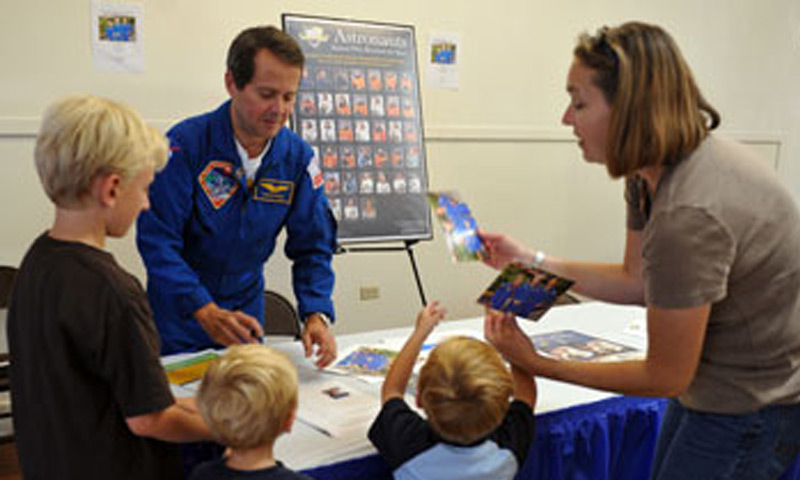 Astronaut Dan Bursch, a 1991 Naval Postgraduate School graduate, meets with members of the local community at the Monterey County Fair. Bursch volunteered his time at NPS’ Innovations in Space exhibit.

Monterey county residents were treated to the customary fair events of midway rides, fried foods, carnival games and informative exhibits at this year’s 74th annual Monterey County Fair, but were also introduced to astronauts, entertained by a live brass band and observed a special patriotic flag ceremony thanks to more than 30 volunteers from the Naval Postgraduate School (NPS).

Members of the NPS community including students, staff, faculty and alumni participated in force in support of the fair, held Sept. 1-6, manning the university’s Innovations in Space exhibit, playing a free concert for attendees, and coming together to unfurl a stadium-sized flag during opening ceremonies for the fair’s Bull-O-Rama rodeo event.

The largest project supported by NPS volunteers was the weeklong presentation of “Innovations in Space,” a showcase exhibit in the fair’s Hall of Innovations. The exhibit, sponsored by NPS’ Space Systems Academic Group, featured static displays, milestones in space systems technology, and also highlighted contributions NPS members have made to space research and technology.

Astronauts Dan Bursch, a 1991 graduate, and Jim Newman, an NPS faculty member, also personally appeared at the exhibit to answer questions about space travel and technology, sign autographs, and visit with members of the local community.

Fairgoers were also treated to patriotic melodies and tunes by the Del Monte Brass band – NPS’ 20-member, all-volunteer brass with percussion group – during a free concert in the fairground’s general amphitheater.

“It was great to be out in the community representing the Navy,” said band founder and trumpet player Carol O’Neal, a retired Navy Captain and research associate in the Operations Research department. “Volunteering to play a concert during fair week gave us the opportunity to showcase our talents and let the public see a little of what we do at the Naval Postgraduate School.” 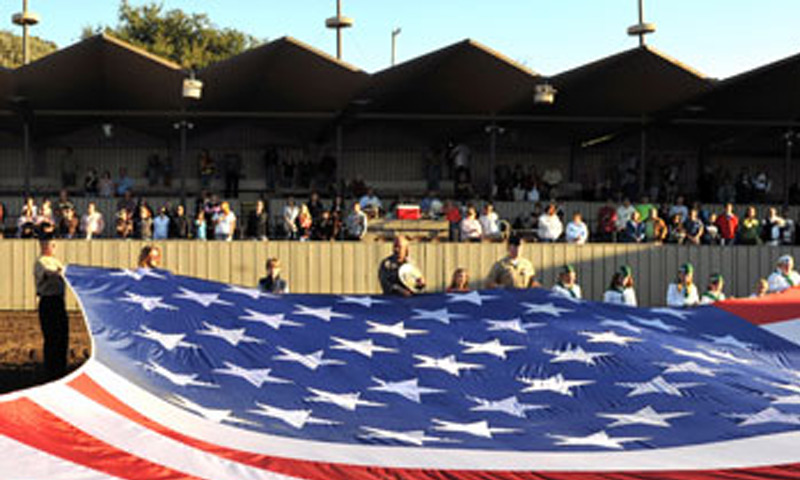 Naval Postgraduate School volunteers and members from the Monterey community unfold an American Flag at the Monterey County Fair as part of opening ceremonies for the fair’s Bull-O-Rama.

More than 20 NPS staff Sailors, along with volunteers from the nearby Defense Language Institute and Coast Guard facility, also took part in a color guard and flag unfurling ceremony before the fair’s Bull-O-Rama rodeo on Sept. 3. Military members unraveled and displayed an American flag measuring 60’ x 40’ in the opening ceremony alongside rodeo cowboys, local youth organizations, and elected officials from the community.

“It was an honor to take part in opening ceremonies and to meet members of our local government,” said Aviation Electronics Technician Second Class Joshua Coon, NPS color guard and volunteer coordinator. “I was contacted by the fair director and didn’t hesitate to call the color guard and other volunteers together. It was a worthwhile and positive experience.”

And according to fair leadership, the feeling was mutual.

“The support and volunteerism provided by the Naval Postgraduate School was extraordinary,” said Kelly Violini, Chief Executive Officer and Manager of the Monterey County Fair. “Everything from the astronauts to the band brought joy and excitement to members of our local community.”