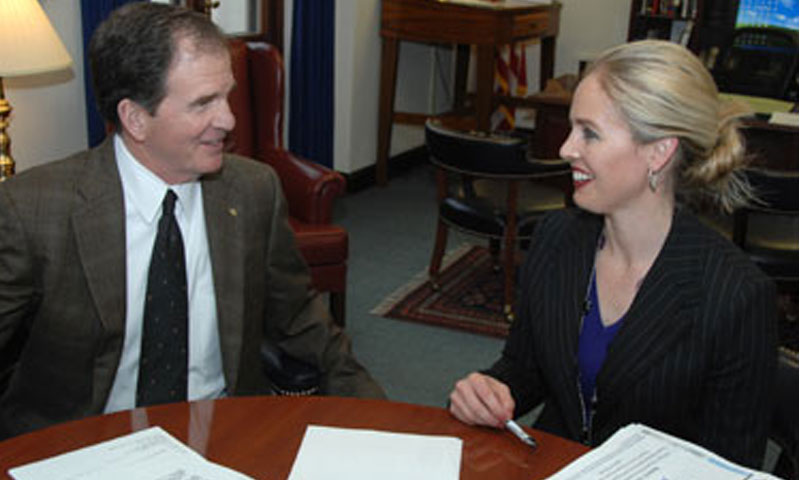 The main purpose of the Chair is to facilitate, advocate and synchronize NPS involvement with fulfilling the acquisition needs of PEO C4I’s Program Office for Science and Technology. PEO C4I is responsible for all C4I systems acquisition for the Navy.

“This is a huge task you’ve taken on, and it’s very positive and exciting,” Oliver told Goshorn at the MOA signing. “The efforts of the new Chair will enable us to use the full potential of NPS to advance the command, control, computers and communications and intelligence capabilities of both the Navy and Department of Defense.”

“This feels like something I’ve been preparing for in all my past degrees and jobs and research, and is a high calling for me,” Goshorn said. “I really believe in it and am excited to be able to help the Navy, PEO C4I and the School expand and synchronize their contributions to C4I.

“The new Chair is the main point of contact and coordination between NPS and PEO C4I,” Goshorn explained. “Working closely with Dean of Research [Karl] van Bibber, one of the first and ongoing jobs is to map NPS’ capabilities in basic and applied research, modeling and simulation, testing, systems engineering, acquisition, business and current sponsors onto the 37 portfolio areas of the PEO C4I’s Master Plan, and then market the School’s capabilities back to PEO C4I to grow student theses, capstone projects and NPS research in this critical area. This is a huge task, as almost every office there has an overlap with the School. I’ve already briefed most of the NPS GSEAS and GSOIS department heads, communicated with all of the deans, and have been and will continue meeting with the research institutes, individual faculty, research centers and labs, and program officers as well,” Goshorn added.

“Other key goals are to develop an NPS/PEO C4I concept of operations; create a new Web site with a monthly newsletter to highlight up-to-date research opportunities structured around the mapping and CONOPS; with other NPS faculty, set up a new NPS C4I Research Group or Forum – and perhaps later a Center – to synchronize NPS C4I-related efforts and sponsorship; and facilitate placing NPS graduates in C4I-related payback tours,” she added.

“I love getting the right people matched up with the vision and the right jobs,” Goshorn said. “If you can share a vision with people, they can get excited about where it’s going and work together.

“This Spring, we’ll be holding a kickoff meeting to present PEO C4I topics of interest to NPS faculty, staff and students, and follow up with biannual workshops in the Fall and Spring to brief the NPS community on programmatic updates and to review efforts to date,” she added.

“NPS teaches not just Navy C4I, but joint C4I, so the new Chair supports both the CNO and the Department of Defense as a whole in bringing the critical vision for network-centric warfare into reality,” said Rodriquez, former SPAWAR chief engineer who is also the university’s West Coast Director of Outreach. “This is exciting – it’s the next step in furthering C4I into the next century – and who better to do it than Dr. Goshorn.”

Goshorn joined the NPS faculty in 2006 following a six-year term at SPAWAR Systems Center Pacific where she was a project manager for two multi-million-dollar projects in ultra high frequency (UHF) satellite signal interference mitigation for submarines and Tomahawk missiles.

“UHF signal interference mitigation is a technical word for anti-jamming,” Goshorn explained. “You need to cancel out the effects of sea surface scattering before you can see if there’s any jamming that needs to be countered. At SPAWAR, I also did research on cleaning up communications channels so that you can know for sure you have the right target.”

“I was funded by multiple PEO C4I Program Manager Warfare offices and the Office of Naval Research on these two SATCOM projects,” Goshorn noted. “I loved working with PEO C4I and am excited to be able to reconnect.”

Being at the Naval Postgraduate School is itself the fulfillment of a life-long dream for Goshorn.

“My parents honeymooned in Monterey, so we visited the area by the Naval Postgraduate School a lot when I was young,” she recalled. “I prayed when I was 10 that someday I would come here to teach. Ever since that day, it’s just flowed. This is literally a dream-come-true job.”

Goshorn’s NPS research and teaching interests include artificial intelligence (AI) systems engineering with a focus on AI behavior modeling and implementation for detection, classification, prediction and prevention in distributed systems; application of intelligent sensors and network systems to the war on terror and homeland security; addressing the Improvised Explosive Device (IED) challenge; and net-centric enterprise systems and services.

Goshorn received her master’s and doctoral degrees in electrical engineering with a specialization in intelligent systems, robotics and control from the University of California at San Diego, in 2001 and 2005. She is the co-author of a book chapter on AI systems solutions and is working on a new book on the subject.